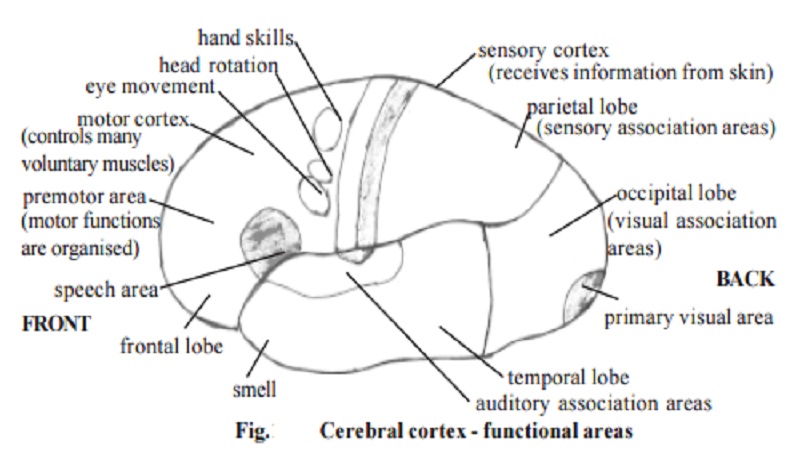 There are more than a thousand million neurons in the adult human brain. An estimate shows that the cerebral cortex alone has about 10power(2783000) synapses. Thus the brain is a complex organ. On structural and functional basis the brain can be divided into 3 regions. They are (1). Fore brain, (2). Midbrain, (3). Hind brain.

The diencephalon is formed of thalamus and hypothalamus.

Thalamus :- It is the largest part of the diencephalon. This region contains a cluster of nuclei. Most of the sensory inputs are conducted to the cerebral cortex through the thalamus. Axons carrying auditory, visual and other sensory informations synapse with specific nuclei of this region. This region may also influence mood and general body movements due to strong emotions such as fear or anger.

This region contains small nuclei and nerve tracts. The nuclei called mamillary bodies are involved in olfactory reflexes and emotional responses to odours. The funnel shaped infundibulum from the hypothalamus connects it to the posterior pituitary orneurohypophysis. This region controls the secretions of the pituitary gland.

The hypothalamus receives inputs from several sensory systems such as tongue, nose and external genitalia. It is associated with emotional and mood relationships. It provides a relaxed feeling. Feeling good after a meal, rage and fear are also due to this region. It also coordinates responses to the sleep-wake cycle with other areas.

It is the largest part of the brain. It weighs about 1400g in males and 1200g in females. Larger brains are normally associated with larger bodies and not with greater intelligence.

The grey matter on the outer surface of the cerebrum is the cortex. It forms clusters deep inside the brain called nuclei. The inner part of the brain, in between the cortex and the nuclei has white matter named as cerebral medulla.

The cortical areas adjacent to the primary sensory centers are called the association areas. These areas are involved in the process of recognition. For example the sensory stimulus from the retina of the eye reaches the visual association area of the cortex. Here the visual information is compared with past experiences. Further this area has connections with other parts of the cortex, which influence decisions. Thus visual information is judged several times. This may be one of the reasons why two people who witness the same event can present somewhat different versions of what happened.

The primary motor area of the cortex controls many voluntary movements, especially the finer motor movements of the hands. Muscle groups such as facial muscles, that have many motor units have greater innervation. They are represented by a large area of the motor cortex.

Anterior to the primary motor area are the premotor area. It is the staging area in which motor functions are organized before they are initiated in the motor cortex. For example, if a person decides to lift a hand, the neurons of the premotor area are stimulated first. This area determines the order and the degree to which the muscles must contract.

The prefrontal area provides motivation and foresight to plan and initiate movements. This area is well developed only in primates and especially in humans. Our emotional behaviour and mood are controlled by this area.

The midbrain or Mesencephalon :-

The hindbrain or Rhombencephalon :-

This part of the brain comprises Cerebellum, Pons and Medulla oblongata.

This region communicates with other region of the CNS through three large nerve tracts called the cerebellar peduncles.

Cerebellar disfunction may cause decreased muscle tone, imbalance and lack of co-ordination.

This region relays information from the cerebrum to the cerebellum. It also contains sleep center and respiratory centers. These centers along with medulla help to control respiratory movements.

It is the most inferior part of the brain stem. It acts as a conduction pathway for both ascending and descending nerve tracts. The nuclei inside medulla oblongata function as centers of several reflexes involved in the regulation of heart rate, blood vessel contractions, breathing, swallowing, vomiting, coughing and sneezing.