Pituitary gland and The hormones of anterior pituitary 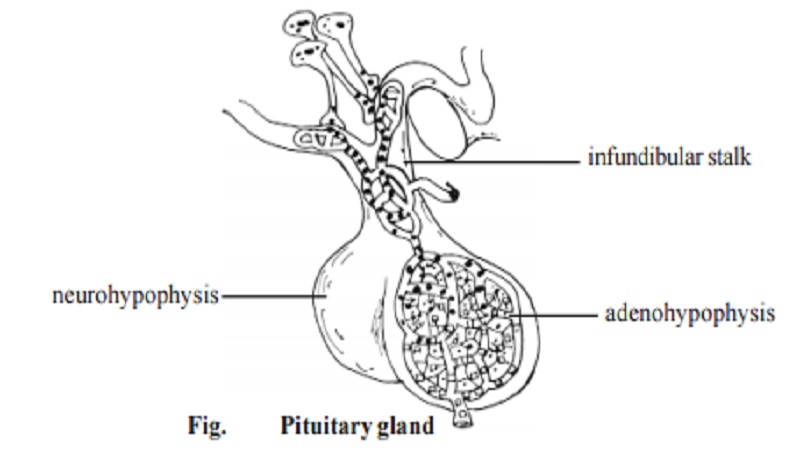 The Pituitary gland is otherwise called the hypophysis. It is located at the base of the brain. It is approximately 1 cm long, 1-1.5 cm wide and 0.5 cm thick. It weighs about 500 mg. Anatomically the pituitary gland is divis-ible into anterior adenohypophysis and posterior neurohypophysis.

Hypothalamus represents the central part between the nervous system and endocrine system. Though pituitary is designated as the master gland controlling the functions of other endocrines, the pituitary itself is controlled by the hypothalamus. The above control is effected by means of releasing hormones or factors and inhibitory hormones or factors. The hypothalamus is connected to the posterior lobe of pituitary by the neural tissue and to the anterior lobe of pituitary by the epithelial tissue. The releasing factors from the hypothalamic cells reach the anterior pituitary through their axons. The hormones from the pituitary enter the blood stream.

The Pituitary gland is otherwise called the hypophysis. It is located at the base of the brain. It is approximately 1 cm long, 1-1.5 cm wide and 0.5 cm thick. It weighs about 500 mg. Anatomically the pituitary gland is divis-ible into anterioradenohypophysis and posterior neurohypophysis. The adenohypophysis consists of three lobes or zones namely, Pars intermedia,Pars distalis and Pars tuberalis. The anterior lobe or adenohypophysis is embryologically derived from the roof of the mouth as a dorsal pouch. The neurohypophysis on the other hand, originates from the floor of diencephalon, as a downward growth.

The hormones of anterior pituitary:

Metabolic functions of the growth hormone:

Growth hormone is responsible for various general metabolic functions. It affects the diverse spectrum of integrated metabolic reactions, which participate in the overall process of growth. Growth hormone influences carbohydrate, protein and lipid metabolism. Growth hormone stimulates both the formation of cartilage (Chondrogenesis) as well as bone (Osteogenesis). It causes the retention of minerals such as nitrogen, potassium, phosphorus, sodium, etc useful for growth.

Deficiency of growth hormone or hyposecretion in children results in retarded growth. The premature arrest of skeletal development causes dwarfism. The adult dwarfs will grow to a height of only 0.9 to 1.2 meter. They never attain puberty or do not develop secondary sexual characters.

Excessive secretion of GH results in over growth of the skeletal structures and the person may reach a height of 7 to 9 feet (gigantism). The excessive GH in adults also results in the increase in thickness of lower jaw and disproportionate over growth of bones of the face, hands and feet. The above condition is known as acromegaly.

It is a protein hormone. ACTH also functions by the negative feed back mechanism and stimulates the adrenal cortex and its secretion. Its other

functions include the stimulation of formation of melanin pigments in the melanocytes of the skin, stimulation of insulin secretion and mobilization of fats from adipose tissue.

It is a gonadotropic hormone that directly stimulates the gonadal func-tions in both males and females. The human FSH is a small glyco protein. The target organs for FSH in the females are the ovaries. It promotes the growth of graffian follicles and thereby increases the total weight of the ovary. It also promotes the secretion of oestrogen. In males, the target organs for FSH are the testes. It directly stimulates the germinal epithelium of the seminiferous tubules and augment the rate of spermatogenesis.

Human ICSH or LH is a glycoprotein. In females, the LH stimulates the ripening of ovarian follicles and induces ovulation. In males, the LH or ICSH, specifically affects the leydig cells or interstitial cells of the testes and stimulates the synthesis and secretion of the male hormone (Androgen) testosterone.

Prolactin is called by several names such as luteotropin, luteotrophic hormone, lactogenic hormone, mammotropin etc. It is a protein hormone. Its main function is stimulation of milk formation or initiation of lactation following parturition in mammals. It also stimulates the corpus luteum to secrete the progesterone. Prolactin together with estrogen stimulates the growth of mammary glands and makes it ready for milk secretion.

The neurohypophysis or the posterior pituitary secretes oxytocin and vasopressin. Oxytocin contains a sequence of amino acid residues. The term oxytocin refers to rapid birth. This hormone directly stimulates the smooth muscles of uterus and causes the contraction, and helps in the delivery of foetus. Another major physiological role of oxytocin is the secretion of milk from the lactating breast. Oxytocin stimulates the myoepithelial cells, which surround the alveoli and ducts of mammary gland. The contraction of myoepithelial elements in turn expels the milk from the alveoli of the breast into the larger ducts or sinuses. From the sinuses, the milk is ejected out.

It is otherwise called as the antidiuretic hormone(ADH). Its main function is the retention of water inside the body by acting on the renal tubules. ADH increases the permeability of the distal tubules and collecting ducts and promotes the reabsorption of water from the renal filtrate. It causes the constriction of all blood vessels and increases the blood pressure. It also helps in the retention of urea. ADH deficiency leads to Diabetes insipidus. The symptoms of Diabetes insipidus are excretion of large volumes of dilute urine (polyurea), combined with an intense thirst leading to the consumption of large quantities of liquids (polydipsia).