Remote Sensing as a Source of Map Data

Remote Sensing refers to the observation and measurement of earthly objects without touching them.

REMOTE SENSING AS A SOURCE OF MAP DATA

Remote Sensing refers to the observation and measurement of earthly objects without touching them.

‘Remote’ means far away and ‘Sensing’ means observing or collecting information. Remote sensing means acquiring information of things/places from a distance, using a variety of tools and methods.

Remote sensing has a long history, dating back from the use of cameras carried by balloons and pigeons in the 18th and 19th centuries. During the 20th century, airborne photographs and satellite remote sensing developed swiftly.

Aerial photography refers to the technique of obtaining information about places or objects or phenomena with the help of photographs taken using cameras mounted on low flying birds, balloons, helicopters, aeroplanes and drones. The aerial photographs are captured continuously with a time gap of 10-30 seconds at a fixed height. Each photo will have a slight overlap of the area in the preceding photo. By making a mosaic of all the photos excluding the overlapping areas, a stereoscopic (3D) image of the study area can be produced. 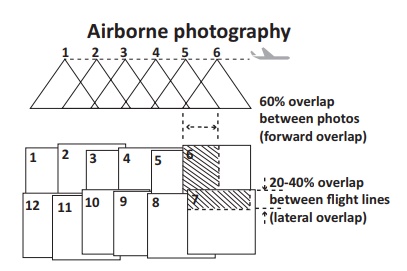 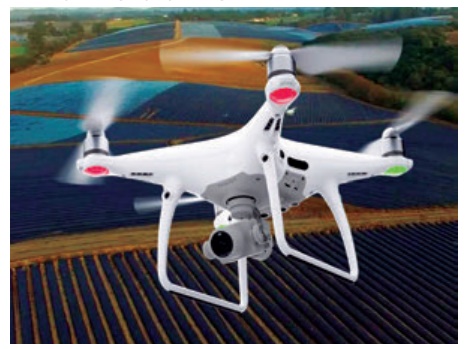 Nowadays you might have seen drones being used for photography during grand occasions such as conferences, weddings, etc.

Satellite remote sensing is the science of collecting data about an object or area from artificial satellites orbiting the Earth. The term ‘satellite imagery’ refers to digitally transmitted images of the satellites. 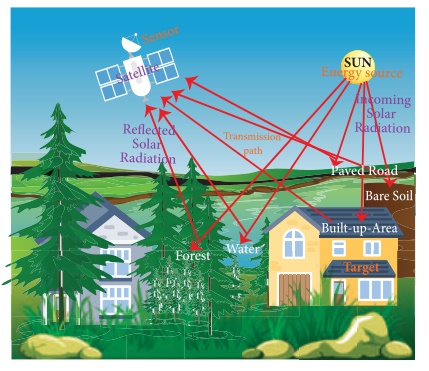 (A)  The EMR (Electro Magnetic Radiation) or solar radiation is the primary source of energy for remote sensing.

(C)  When solar radiation falls on the earth's surface, some of its energy is absorbed. While some is transmitted through the surface, the rest is reflected. Surfaces naturally emit radiation in the form of heat. The reflected energy travels from the earth surface back to space.

(D) Sensors in the satellite record the reflected and emitted radiation. Each surface/object possesses a characteristic spectral signature, a unique pattern of reflecting sunlight.

(E) The energy recorded by the sensor has to be transmitted to a ground station where the data are processed into an image.

(F) The processed image is interpreted either visually by human interpreters or by computer aided techniques called digital image processing to identify and distinguish between the different spectral signatures to get information about objects/places.

(G) Finally, we understand and apply the extracted information in mapping the area or assist in solving the particular problem. 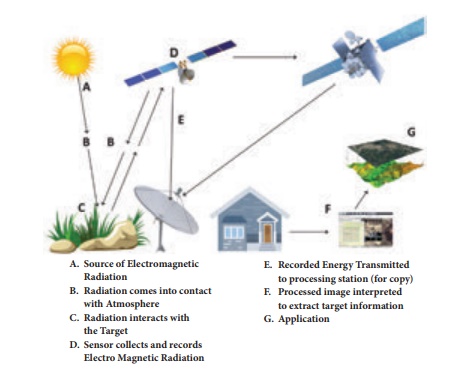 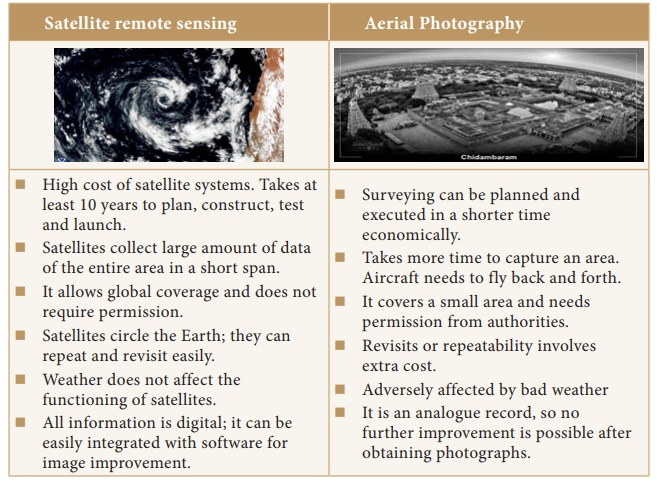 ·              All information is digital; it can be easily integrated with software for image improvement.

·              It is an analogue record, so no further improvement is possible after obtaining photographs.

     It is the only practical way to obtain data from inaccessible regions, e.g. Antarctica, Amazon forest.

     It helps in constructing cheap base maps in the absence of detailed land surveys.

     It detects the spread of natural calamities such as flood, forest fire and volcanic eruption, so that immediate rescue operations and planning can be carried out.

     It is difficult to prepare large scale maps from obtained satellite data.

     The technique is very expensive for small areas requiring one time analysis.

Recent usage of Remote Sensing device in India and Malaysia 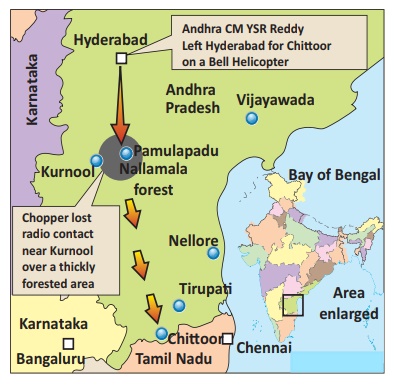 This Boeing Commercial Airplane had disappeared on 8 March 2014 with 237 passengers onboard from Kuala Lumpur to Beijing. Numerous satellite images from diverse times, day and night, were used for the search for the missing flight. It became the most expensive search in aviation history, relying mostly on analysis of data from the Inmarsat (British satellite) to look into the airplane, flight data recorder and cockpit voice recorder, as well as the possible path. Search for oil slicks or debris or a piece of wing from MH370 with satellite image processing using ENVI software was done by thousands of volunteers. After analyzing the 23 March 2014 satellite imagery, two weeks after MH370 disappeared, 12 objects in the ocean classifying as "probably man-made", were found to suspect the burst of the flight. The communications between Flight 370 and the satellite communication network relayed by the Inmarsat-3 F1 satellite provided significant clues to the location of Flight 370. The search goes on with no confirmed results yet.

The preliminary data is retrieved from satellites like LANDSAT, CARTOSAT, OCEANSAT, etc. Fire and flood details can be extracted and delivered to relevant authorities within two hours of satellite image capture. E.g. major earthquakes in China and New Zealand, bushfire in Victoria and floods in Kerala. Dynamic phenomena such as flood, movement of wild animals, shoreline changes, finding lost ships and planes. Researchers use satellite imageries for these.

Have you ever booked a cab using a smart phone app? Did you see the map showing the route of your travel and movement of your vehicle on mobile phones? How is it possible to calculate the time duration of your travel?

In the 21st century, GNSS has become a part of our lives to promote the safety and convenience of transport. Global Navigation Satellite System (GNSS) is a satellite system connected with a small electronic receiver or tracker to locate, monitor and track a user's vehicle wherever in the world. It can also set up instant alerts when a driver of a vehicle speeds or deviates from a particular area. GNSS applications are used in tracking or mapping vehicles, ships and aircraft. A group of satellites (Space Segment) working with a network of ground stations (Control Segment) provide location data. The receiver (User Segment) converts satellite signals into location, speed and time data.

Without the Global Positioning System (GPS) on our vehicles and mobile phones, we would feel lost. GPS is the U.S. implementation of the world's first and currently the most used Global Navigation Satellite System (GNSS) created by the U. S. Department Of Defense (DOD). It became fully operational in 1995. 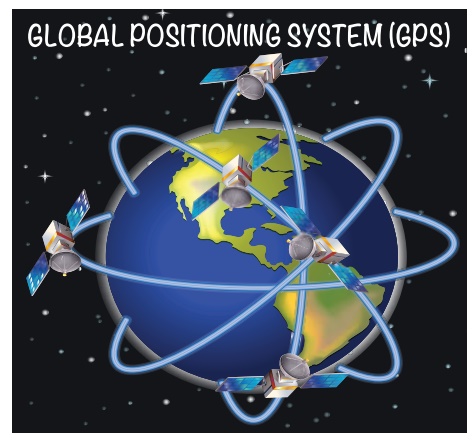 NAVSTAR (Navigation Satellite Timing and Ranging) is a network of 24 U.S. satellites in six different orbits in space flying 20,350 km above the surface of the Earth; each one circles the planet twice a day to provide continuous, worldwide coverage. GPS receivers now come in all shapes and sizes, Most are the size of a cellular phone. Some are handheld, others are installed in ships, planes, trucks and cars.

GPS technology has  tremendous applications in everything from mobile phones, watches, bulldozers, shipping containers and ATMs.

    The main purpose of GPS is to help in providing accurate transport data (distance, route and direction). It helps in military searches and rescue in wars. It can work as a reliable tourist guide.

     GPS helps during accident and rescue efforts, speeding the delivery of emergency services and disaster relief.

I - Information - facts in order

The key ingredient is location. We must have a coordinate, an address or a distance from a known point that helps us to link the information to a location on a map. Each type of data of an area is stored as a separate 'layer' of the map. In GIS, layers may be used some times and removed according to need. Examples are hospitals, schools, water bodies, parks and ATMs. The computers can create maps showing any combination of data.

     Maps produced by GIS analysis can be used to pinpoint problem areas.

     GIS finds its strongest use in resources management, telecommunications and urban and regional planning.

     GIS helps in planning the land-use requirements. The local government uses GIS for taxation and planning.

The hardware and software functions of a GIS include

Cyber cartography is a term that is used to define all the aspects of current state of Web and virtual mapping.