After ingestion of a normal meal, extracellular fluid potassium concentration would rise to a lethal level if the ingested potassium did not rapidly move into the cells.

After ingestion of a normal meal, extracellular fluid potassium concentration would rise to a lethal level if the ingested potassium did not rapidly move into the cells. For example, absorption of 40 milliequivalents of potassium (the amount contained in a meal rich in veg-etables and fruit) into an extracellular fluid volume of 14 liters would raise plasma potassium concentration by about 2.9 mEq/L if all the potassium remained in the extracellular compartment. Fortunately, most of the ingested potassium rapidly moves into the cells until the kidneys can eliminate the excess. Table 29–1 summarizes some of the factors that can influence the distribution of potassium between the intra- and extra-cellular compartments. 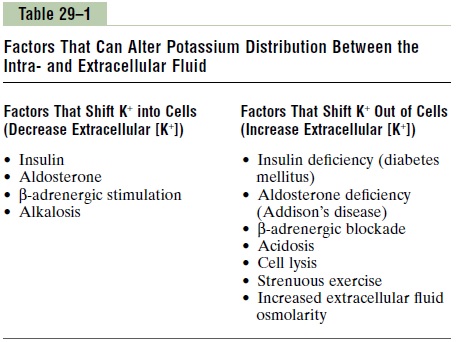 Insulin Stimulates Potassium Uptake into Cells. One of themost important factors that increase cell potassium uptake after a meal is insulin. In people who have insulin deficiency owing to diabetes mellitus, the rise in plasma potassium concentration after eating a meal is much greater than normal. Injections of insulin, however, can help to correct the hyperkalemia.

Aldosterone Increases Potassium Uptake into Cells. Increasedpotassium intake also stimulates secretion of aldos-terone, which increases cell potassium uptake. Excess aldosterone secretion (Conn’s syndrome) is almost invariably associated with hypokalemia, due in part to movement of extracellular potassium into the cells. Conversely, patients with deficient aldosterone produc-tion (Addison’s disease) often have clinically significant hyperkalemia due to accumulation of potassium in the extracellular space as well as to renal retention of potassium.

β-Adrenergic Stimulation Increases Cellular Uptake of Potassium. Increased secretion of catecholamines, especially epi-nephrine, can cause movement of potassium from the extracellular to the intracellular fluid, mainly by activa-tion of b2-adrenergic receptors. Treatment of hyperten-sion with b-adrenergic receptor blockers, such as propranolol, causes potassium to move out of the cells and creates a tendency toward hyperkalemia.

Strenuous Exercise Can Cause Hyperkalemia by Releasing Potas- sium from Skeletal Muscle. During prolonged exercise,potassium is released from skeletal muscle into the extracellular fluid. Usually the hyperkalemia is mild, but it may be clinically significant after heavy exercise in patients treated with b-adrenergic blockers or in indi-viduals with insulin deficiency. In rare instances, hyper-kalemia after exercise may be severe enough to cause cardiac arrhythmias and sudden death.