One of the most basic and powerful mechanisms for control of blood volume and extracellular fluid volume, as well as for the maintenance of sodium and fluid balance, is the effect of blood pressure on sodium and water excretion—called the pressure natriuresis and pressure diuresis mechanisms, respectively. As discussed in, this feedback between the kidneys and the circulatory system also plays a domi-nant role in long-term blood pressure regulation. 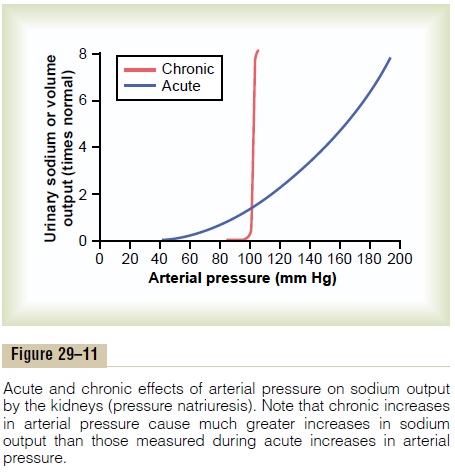 Figure 29–11 shows the effect of arterial pressure on urinary sodium output. Note that acute increases in blood pressure of 30 to 50 mm Hg cause a twofold to threefold increase in urinary sodium output. This effect is independent of changes in activity of the sym-pathetic nervous system or of various hormones, such as angiotensin II, ADH, or aldosterone, because pres-sure natriuresis can be demonstrated in an isolated kidney that has been removed from the influence of these factors. With chronic increases in blood pressure, the effectiveness of pressure natriuresis is greatly enhanced because the increased blood pressure also, after a short time delay, suppresses renin release and, therefore, decreases formation of angiotensin II and aldosterone. As discussed previously, decreased levels of angiotensin II and aldosterone inhibit renal tubular reabsorption of sodium, thereby amplifying the direct effects of increased blood pressure to raise sodium and water excretion.

The effect of increased blood pressure to raise urine output is part of a powerful feedback system that operates to maintain balance between fluid intake and output, as shown in Figure 29–12. The extracellular fluid volume, blood volume, cardiac output, arterial pressure, and urine output are all controlled at the same time as separate parts of this basic feedback mechanism. 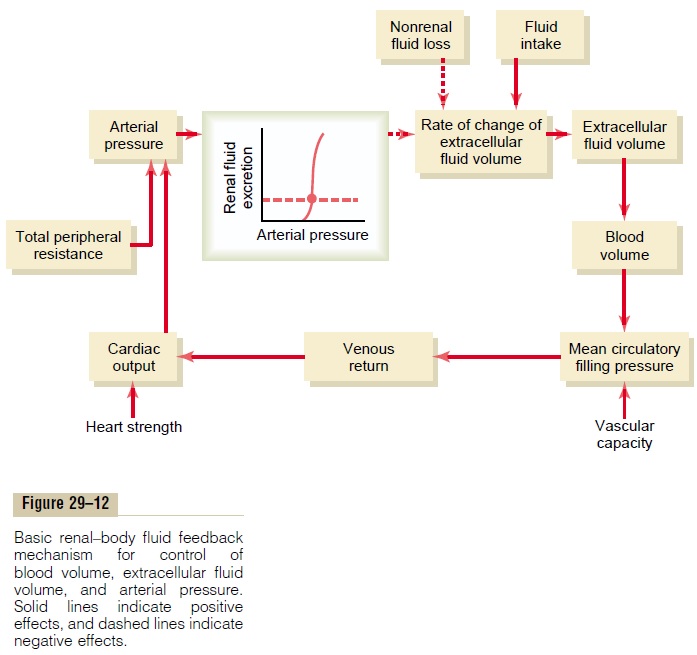 During changes in sodium and fluid intake, this feed-back mechanism helps to maintain fluid balance and to minimize changes in blood volume, extracellular fluid volume, and arterial pressure as follows:

1.     An increase in fluid intake (assuming that sodium accompanies the fluid intake) above the level of urine output causes a temporary accumulation of fluid in the body.

2.     As long as fluid intake exceeds urine output, fluid accumulates in the blood and interstitial spaces, causing parallel increases in blood volume and extracellular fluid volume. As discussed later, the actual increases in these variables are usually small because of the effectiveness of this feedback.

7.     An increased arterial pressure increases urine output by way of pressure diuresis. The steepness of the normal pressure natriuresis relation indicates that only a slight increase in blood pressure is required to raise urinary excretion severalfold.

8.     The increased fluid excretion balances the increased intake, and further accumulation of fluid is prevented.

The opposite sequence of events occurs when fluid intake falls below normal. In this case, there is a ten-dency toward decreased blood volume and extracellu-lar fluid volume, as well as reduced arterial pressure. Even a small decrease in blood pressure causes a large decrease in urine output, thereby allowing fluid balance to be maintained with minimal changes in blood pressure, blood volume, or extracellular fluid volume. The effectiveness of this mechanism in pre-venting large changes in blood volume is demon-strated in Figure 29–13, which shows that changes in blood volume are almost imperceptible despite large variations in daily intake of water and electrolytes, except when intake becomes so low that it is not suf-ficient to make up for fluid losses caused by evapora-tion or other inescapable losses. 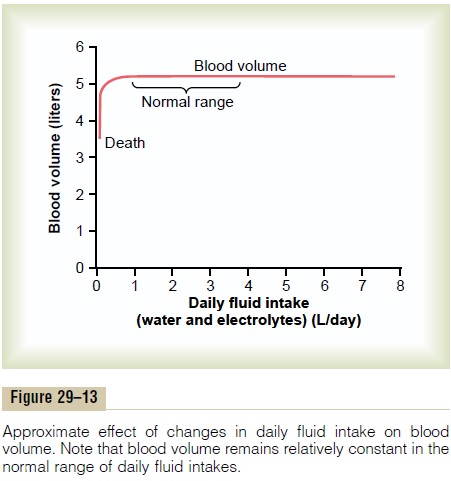 The same control mechanisms operate whenever there is a loss of whole blood because of hemorrhage. In this case, fluid is retained by the kidneys, and other parallel processes occur to reconstitute the red blood cells and plasma proteins in the blood. If abnormali- ties of red blood cell volume remain, such as occurs when there is deficiency of erythropoietin or other factors needed to stimulate red blood cell production, the plasma volume will simply make up the difference, and the overall blood volume will return essentially to normal despite the low red blood cell mass.