However, abnor-malities of kidney function or of the various nervous and hormonal factors that influence the kidneys can lead to serious changes in blood pressure and body fluid volumes, as discussed later.

We discuss the nervous and hormonal factors that influence GFR and tubular reabsorption and, therefore, renal excretion of salt and water. These nervous and hormonal mechanisms usually act in concert with the pressure natriuresis and pressure diuresis mechanisms, making them more effective in minimizing the changes in blood volume, extracellular fluid volume, and arterial pressure that occur in response to day-to-day challenges. However, abnor-malities of kidney function or of the various nervous and hormonal factors that influence the kidneys can lead to serious changes in blood pressure and body fluid volumes, as discussed later.

Because the kidneys receive extensive sympathetic innervation, changes in sympathetic activity can alter renal sodium and water excretion as well as regulation of extracellular fluid volume under some conditions. For example, when blood volume is reduced by hem-orrhage, the pressures in the pulmonary blood vessels and other low-pressure regions of the thorax decrease, causing reflex activation of the sympathetic nervous system. This in turn increases renal sympathetic nerve activity, which has several effects to decrease sodium and water excretion: (1) constriction of the renal arte-rioles, with resultant decreased GFR; (2) increased tubular reabsorption of salt and water; and (3) stimu-lation of renin release and increased angiotensin II and aldosterone formation, both of which further increase tubular reabsorption. And if the reduction in blood volume is great enough to lower systemic arte-rial pressure, further activation of the sympathetic nervous system occurs because of decreased stretch of the arterial baroreceptors located in the carotid sinus and aortic arch. All these reflexes together play an important role in the rapid restitution of blood volume that occurs in acute conditions such as hemorrhage. Also, reflex inhibition of renal sympathetic activity may contribute to the rapid elimination of excess fluid in the circulation that occurs after eating a meal that contains large amounts of salt and water.

Conversely, when sodium intake is reduced below normal, increased levels of angiotensin II cause sodium and water retention and oppose reductions in arterial blood pressure that would otherwise occur. Thus, changes in activity of the renin-angiotensin system act as a powerful amplifier of the pressure natriuresis mechanism for maintaining stable blood pressures and body fluid volumes. 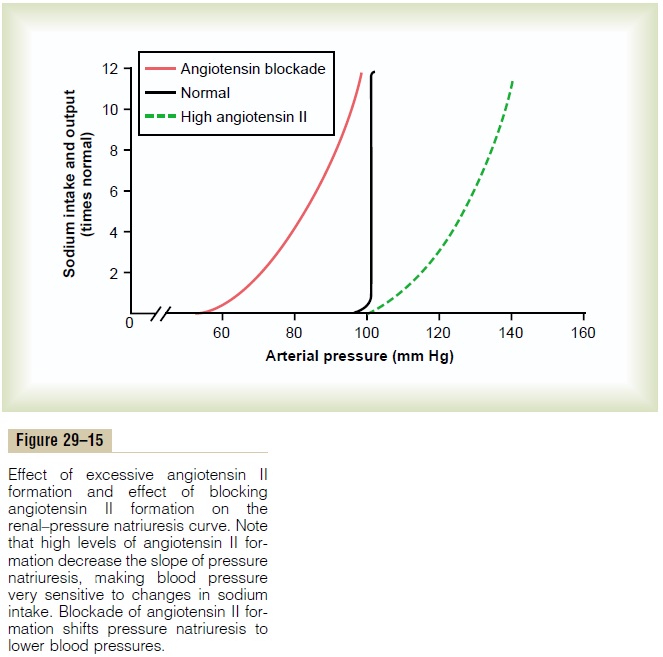 In contrast, when angiotensin levels cannot be decreased in response to increased sodium intake (high angiotensin II curve), as occurs in some hyper-tensive patients who have impaired ability to decrease renin secretion, the pressure natriuresis curve is not nearly as steep. Therefore, when sodium intake is raised, much greater increases in arterial pressure are needed to increase sodium excretion and maintain sodium balance. For example, in most people, a 10-fold increase in sodium intake causes an increase of only a few millimeters of mercury in arterial pressure, whereas in subjects who cannot suppress angiotensin

II formation appropriately in response to excess sodium, the same rise in sodium intake causes blood pressure to rise as much as 50 mm Hg. Thus, the inabil-ity to suppress angiotensin II formation when there is excess sodium reduces the slope of pressure natriure-sis and makes arterial pressure very salt sensitive.

The use of drugs to block the effects of angiotensin II has proved to be important clinically for improv-ing the kidneys’ ability to excrete salt and water. When angiotensin II formation is blocked with an angiotensin-converting enzyme inhibitor (see Figure 29–15) or an angiotensin II receptor antagonist, the renal–pressure natriuresis curve is shifted to lower pressures; this indicates an enhanced ability of the kidneys to excrete sodium because normal levels of sodium excretion can now be maintained at reduced arterial pressures. This shift of pressure natriuresis provides the basis for the chronic blood pressure–lowering effects in hypertensive patients of the angiotensin-converting enzyme inhibitors and angiotensin II receptor antagonists.

Although angiotensin II is one of the most powerful sodium- and water-retaining hormones in the body, neither a decrease nor an increase in circulating angiotensin II has a large effect on extracellular fluid volume or blood volume. The reason for this is that with large increases in angiotensin II levels, as occurs with a renin-secreting tumor of the kidney, the high angiotensin II levels initially cause sodium and water retention by the kidneys and a small increase in extracellular fluid volume. This also initi-ates a rise in arterial pressure that quickly increases kidney output of sodium and water, thereby overcom-ing the sodium- and water-retaining effects of the angiotensin II and re-establishing a balance between intake and output of sodium at a higher blood pres-sure. Conversely, after blockade of angiotensin II for-mation, as occurs when an angiotensin-converting enzyme inhibitor is administered, there is initial loss of sodium and water, but the fall in blood pressure offsets this effect, and sodium excretion is once again restored to normal.

The function of aldosterone in regulating sodium balance is closely related to that described for angiotensin II.That is, with reduction in sodium intake, the increased angiotensin II levels that occur stimulate aldosterone secretion, which in turn contributes to the reduction in urinary sodium excretion and, therefore, to the maintenance of sodium balance. Conversely, with high sodium intake, suppression of aldosterone formation decreases tubular reabsorption, allowing the kidneys to excrete larger amounts of sodium. Thus, changes in aldosterone formation also aid the pressure natriuresis mechanism in maintaining sodium balance during variations in salt intake.

Although aldosterone has powerful effects on sodium reabsorption, when there is excessive infusion of aldosterone or excessive formation of aldosterone, as occurs in patients with tumors of the adrenal gland (Conn’s syndrome), the increased sodium reabsorp-tion and decreased sodium excretion by the kidneys are transient. After 1 to 3 days of sodium and water retention, the extracellular fluid volume rises by about 10 to 15 per cent and there is a simultaneous increase in arterial blood pressure. When the arterial pressure rises sufficiently, the kidneys “escape” from the sodium and water retention and thereafter excrete amounts of sodium equal to the daily intake, despite continued presence of high levels of aldosterone. The primary reason for the escape is the pressure natriuresis and diuresis that occur when the arterial pressure rises.

In patients with adrenal insufficiency who do not secrete enough aldosterone (Addison’s disease), there is increased excretion of sodium and water, reduction in extracellular fluid volume, and a tendency toward low blood pressure. In the complete absence of aldos-terone, the volume depletion may be severe unless the person is allowed to eat large amounts of salt and drink large amounts of water to balance the increased urine output of salt and water.

As discussed, ADH plays an important role in allowing the kidneys to form a small volume of concentrated urine while excreting normal amounts of salt. This effect is especially important during water deprivation, which strongly elevates plasma levels of ADH that in turn increase water reabsorption by the kidneys and help to minimize the decreases in extra-cellular fluid volume and arterial pressure that would otherwise occur. Water deprivation for 24 to 48 hours normally causes only a small decrease in extracellular fluid volume and arterial pressure. However, if the effects of ADH are blocked with a drug that antago-nizes the action of ADH to promote water reabsorp-tion in the distal and collecting tubules, the same period of water deprivation causes a substantial fall in both extracellular fluid volume and arterial pressure.

Conversely, when there is excess extracellular volume, decreased ADH levels reduce reabsorption of water bythe kidneys, thus helping to rid the body of the excess volume.

Thus, high levels of ADH do not cause major increases of either body fluid volume or arterial pres-sure, although high ADH levels can cause severe reduc-tions in extracellular sodium ion concentration. Thereason for this is that increased water reabsorption by the kidneys dilutes the extracellular sodium, and at the same time, the small increase in blood pressure that does occur causes loss of sodium from the extracellu-lar fluid in the urine through pressure natriuresis.

In patients who have lost their ability to secrete ADH because of destruction of the supraoptic nuclei, the urine volume may become 5 to 10 times normal. This is almost always compensated for by ingestion of enough water to maintain fluid balance. If free access to water is prevented, the inability to secrete ADH may lead to marked reductions in blood volume and arterial pressure.

Thus far, we have discussed mainly the role of sodium-and water-retaining hormones in controlling extracel-lular fluid volume. However, several different natri-uretic hormones may also contribute to volume regulation. One of the most important of the natri-uretic hormones is a peptide referred to as atrial natri-uretic peptide (ANP), released by the cardiac atrialmuscle fibers. The stimulus for release of this peptide appears to be overstretch of the atria, which can result from excess blood volume. Once released by the cardiac atria, ANP enters the circulation and acts on the kidneys to cause small increases in GFR and decreases in sodium reabsorption by the collecting ducts. These combined actions of ANP lead to increased excretion of salt and water, which helps to compensate for the excess blood volume.