The mechanisms for regulating calcium ion concentration are discussed in detail, along with the endocrinology of the calcium-regulating hormones parathyroid hormone (PTH) and calcitonin.

The mechanisms for regulating calcium ion concentration are discussed in detail, along with the endocrinology of the calcium-regulating hormones parathyroid hormone (PTH) and calcitonin.

About 50 per cent of the total calcium in the plasma (5 mEq/L) exists in the ionized form, which is the form that has biological activity at cell membranes. The remainder is either bound to the plasma proteins (about 40 per cent) or complexed in the non-ionized form with anions such as phosphate and citrate (about 10 per cent).

As with other substances in the body, the intake of calcium must be balanced with the net loss of calcium over the long term. Unlike ions such as sodium and chloride, however, a large share of calcium excretion occurs in the feces. The usual rate of dietary calcium intake is about 1000 mg/day, with about 900 mg/day of calcium excreted in the feces. Under certain condi-tions, fecal calcium excretion can exceed calcium ingestion because calcium can also be secreted into the intestinal lumen. Therefore, the gastrointestinal tract and the regulatory mechanisms that influence intestinal calcium absorption and secretion play a major role in calcium homeostasis. 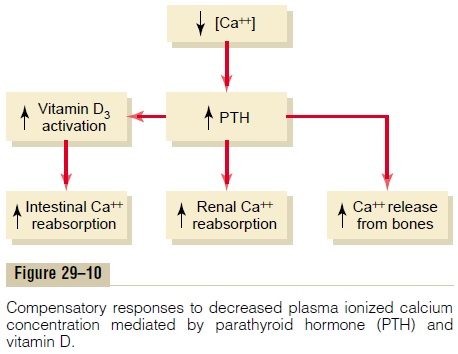 One of the most important regulators of bone uptake and release of calcium is PTH. When extracellular fluid calcium concentration falls below normal, the parathy-roid glands are directly stimulated by the low calcium levels to promote increased secretion of PTH. This hormone then acts directly on the bones to increase the resorption of bone salts (release of salts from the bones) and, therefore, to release large amounts of calcium into the extracellular fluid, thereby returning calcium levels back toward normal. When calcium ion concentration is elevated, PTH secretion decreases, so that almost no bone resorption now occurs; instead, excess calcium is deposited in the bones because of new bone formation. Thus, the day-to-day regulation of calcium ion concentration is mediated in large part by the effect of PTH on bone resorption.

The bones, however, do not have an inexhaustible supply of calcium. Therefore, over the long term, the intake of calcium must be balanced with calcium excretion by the gastrointestinal tract and the kidneys. The most important regulator of calcium reabsorption at both of these sites is PTH. Thus, PTH regulatesplasma calcium concentration through three main effects: (1) by stimulating bone resorption; (2) by stim-ulating activation of vitamin D, which then increases intestinal reabsorption of calcium; and (3) by directly increasing renal tubular calcium reabsorption (Figure29–10). The control of gastrointestinal calcium reab-sorption and calcium exchange in the bones is dis-cussed elsewhere, and the remainder of this section focuses on the mechanisms that control renal calcium excretion.

Control of Calcium Excretion by the Kidneys

Because calcium is both filtered and reabsorbed in the kidneys but not secreted, the rate of renal calcium excretion is calculated as

A summary of the factors that are known to influence calcium excretion by the renal tubules is shown in Table 29–2. 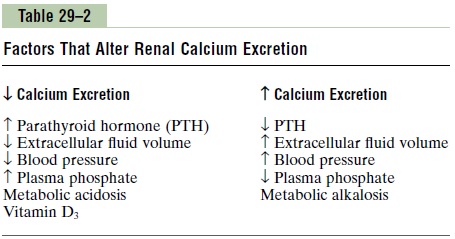 Phosphate excretion by the kidneys is controlled primarily by an overflow mechanism that can be explained as follows: The renal tubules have a normal transport maximum for reabsorbing phosphate of about 0.1 mM/min. When less than this amount of phosphate is present in the glomerular filtrate, essentially all the filtered phosphate is reabsorbed.

Changes in tubular phosphate reabsorption can also influence phosphate excretion. For instance, a diet low in phosphate can, over time, increase the reabsorptive transport maximum for phosphate, thereby reducing the tendency for phosphate to spill over into the urine.

PTH can play a significant role in regulating phos-phate concentration through two effects: (1) PTH promotes bone resorption, thereby dumping large amounts of phosphate ions into the extracellular fluid from the bone salts, and (2) PTH decreases the trans-port maximum for phosphate by the renal tubules, so that a greater proportion of the tubular phosphate is lost in the urine. Thus, whenever plasma PTH isincreased, tubular phosphate reabsorption is decreased and more phosphate is excreted.