A. Describe intrinsic and extrinsic regulation of the heart. B. Give the conditions for which the major heart medications and treatments are administered.

This cardiac output is several times greater than the cardiac output under resting conditions. Athletes can increase their cardiac output to a greater degree than nonathletes. The control mecha-nisms that modify the stroke volume and the heart rate are classi-fied as intrinsic and extrinsic.

Intrinsic Regulation Of The Heart

Afterload refers to the pressure against which the ventriclesmust pump blood. People suffering from hypertension have an increased afterload because their aortic pressure is elevated dur-ing contraction of the ventricles. The heart must do more work to pump blood from the left ventricle into the aorta, which increases the workload on the heart and can eventually lead to heart failure. A reduced afterload decreases the work the heart must do. People who have lower blood pressure have a reduced afterload and develop heart failure less often than people who have hypertension. However, the afterload influences cardiac output less than preload influences it. The afterload must increase substantially before it decreases the volume of blood pumped by a healthy heart.

Extrinsic Regulation Of The Heart

Extrinsic regulation refers to mechanisms external to the heart,such as either nervous or chemical regulation.

The baroreceptor (bar′ ̄o -r̄e -sep′ ter; baro, pressure) reflex is a mechanism of the nervous system that plays an important role in regulating heart function. Baroreceptors are stretch receptors that monitor blood pressure in the aorta and in the wall of the internal carotid arteries, which carry blood to the brain. Changes in blood pressure result in changes in the stretch of the walls of these blood vessels—and changes in the frequency of action potentials produced by the baroreceptors. The action potentials are transmitted along nerve fibers from the stretch receptors to the medulla oblongata of the brain.

Figure 12.20 shows how the baroreceptor reflex keeps the heart rate and stroke volume within normal ranges. When the blood pressure increases, the baroreceptors are stimulated. Action poten-tials are sent along the nerve fibers to the medulla oblongata at increased frequency. This prompts the cardioregulatory center to increase parasympathetic stimulation and decrease sympathetic stimulation of the heart. As a result, the heart rate and stroke vol-ume decrease, causing blood pressure to decline. 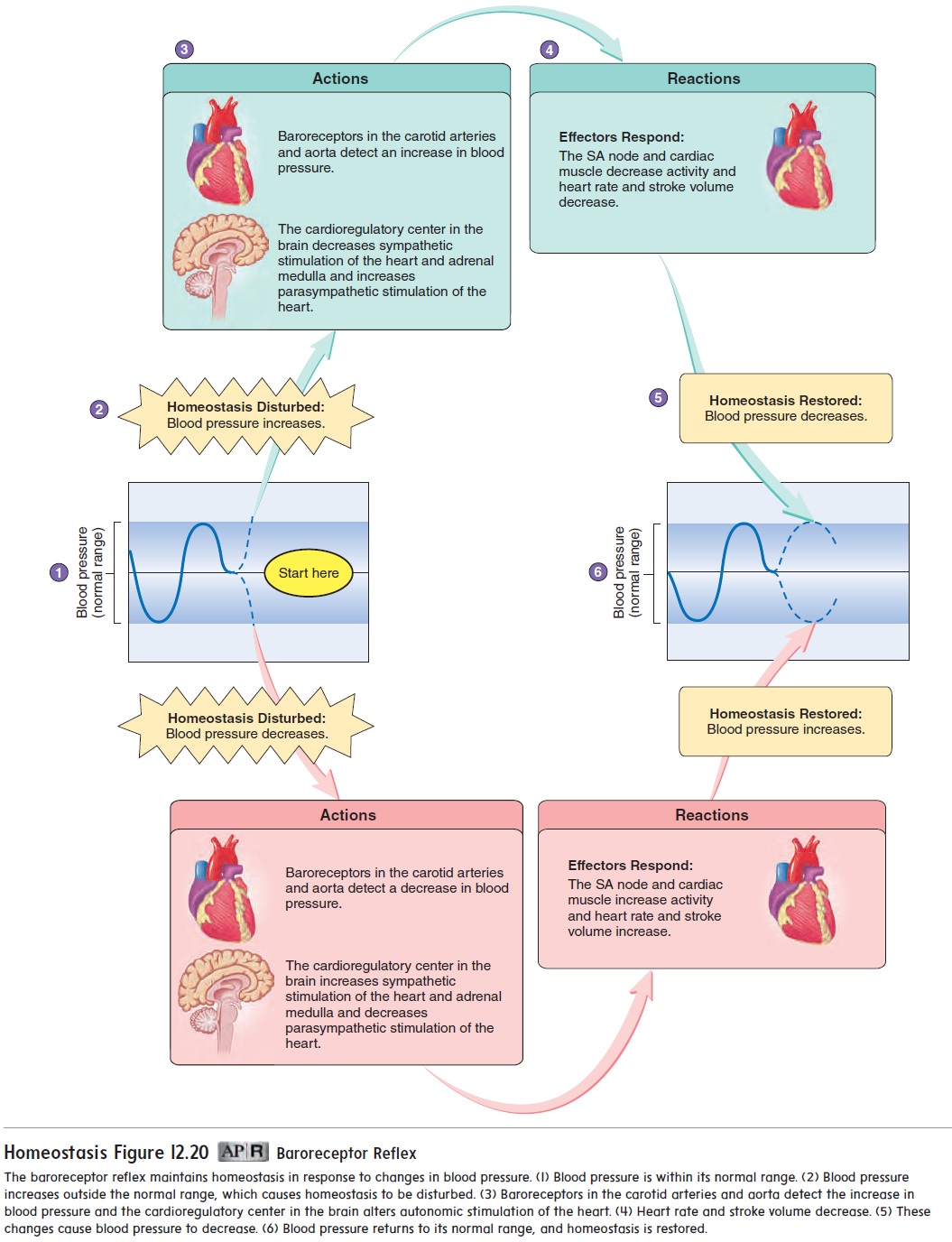 Epinephrine and small amounts of norepinephrine released from the adrenal medulla in response to exercise, emotional excitement, or stress also influence the heart’s function. Epinephrine and nor-epinephrine bind to receptor proteins on cardiac muscle and cause increased heart rate and stroke volume. Excitement, anxiety, or anger can affect the cardioregulatory center, resulting in increased sympathetic stimulation of the heart and increased cardiac output. Depression, on the other hand, can increase parasympathetic stim-ulation of the heart, causing a slight reduction in cardiac output.

The medulla oblongata of the brain also contains chemorecep-tors that are sensitive to changes in pH and CO2 levels. A decrease in pH, often caused by an increase in CO2, results in sympathetic stimulation of the heart (figure 12.21). 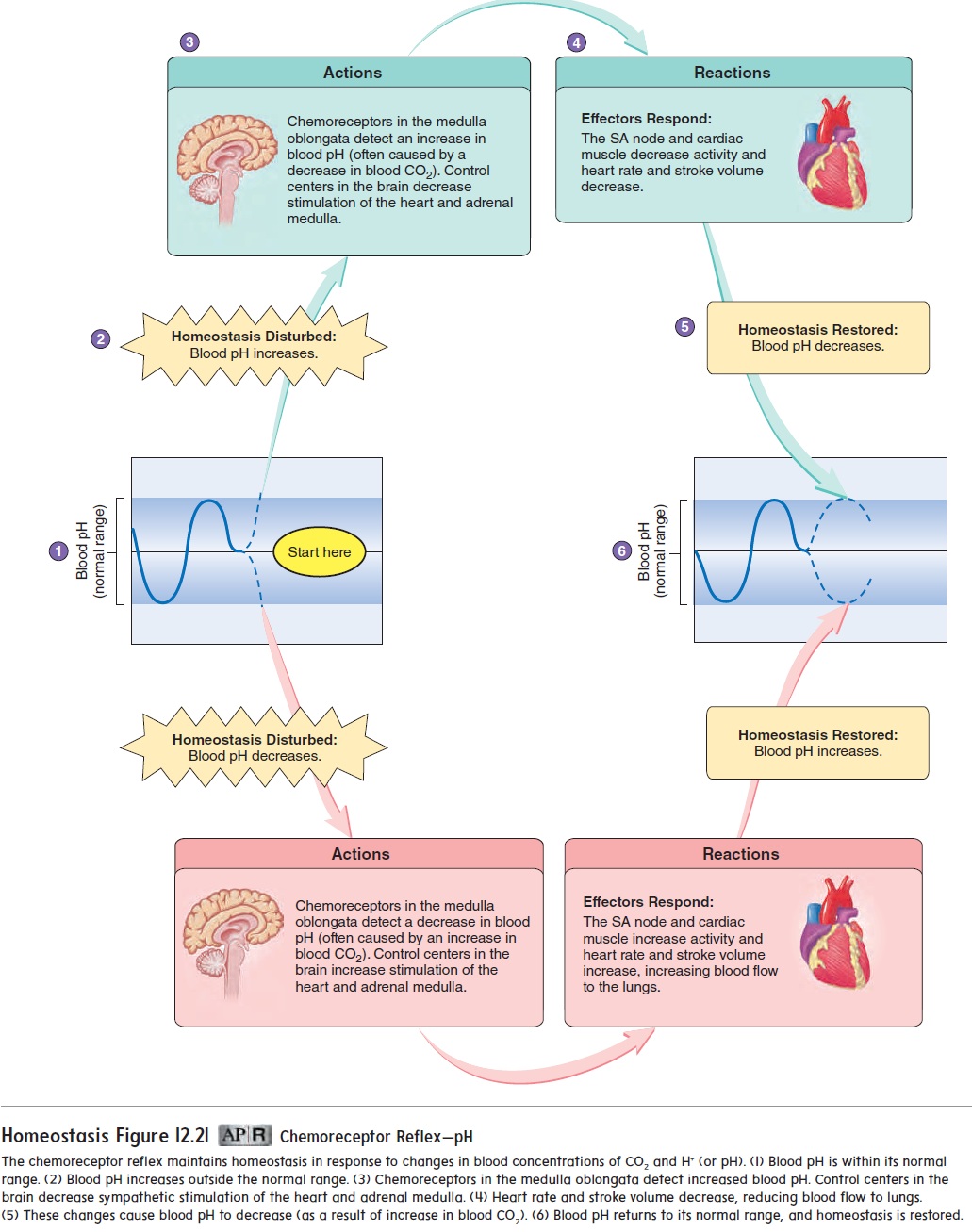 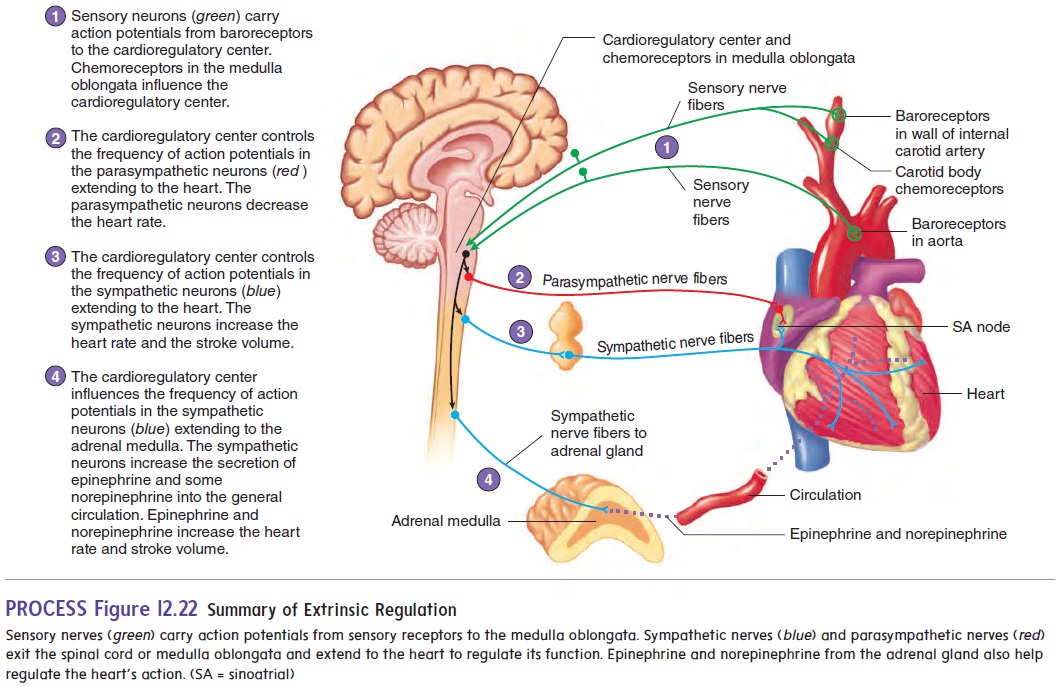 Figure 12.22 summarizes how nervous and chemical factors interact to regulate the heart rate and stroke volume.