Anatomy of the Heart 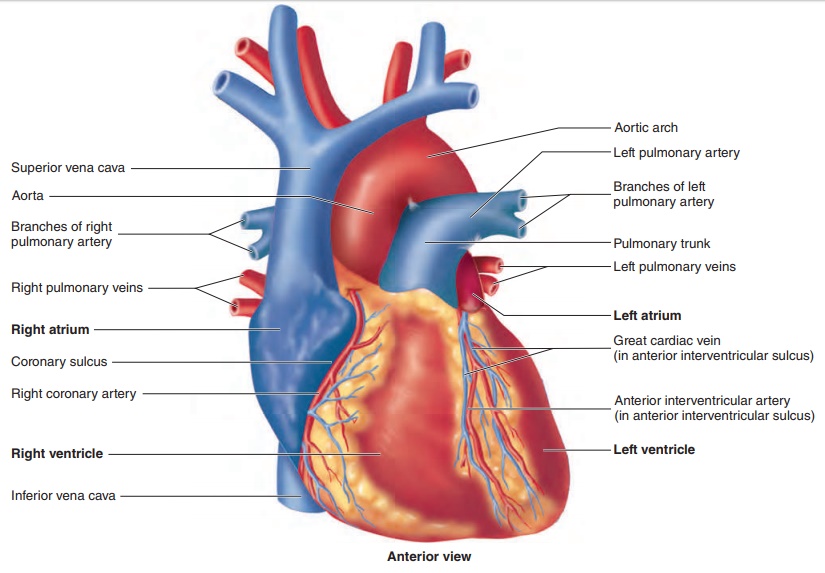 ANATOMY OF THE HEART 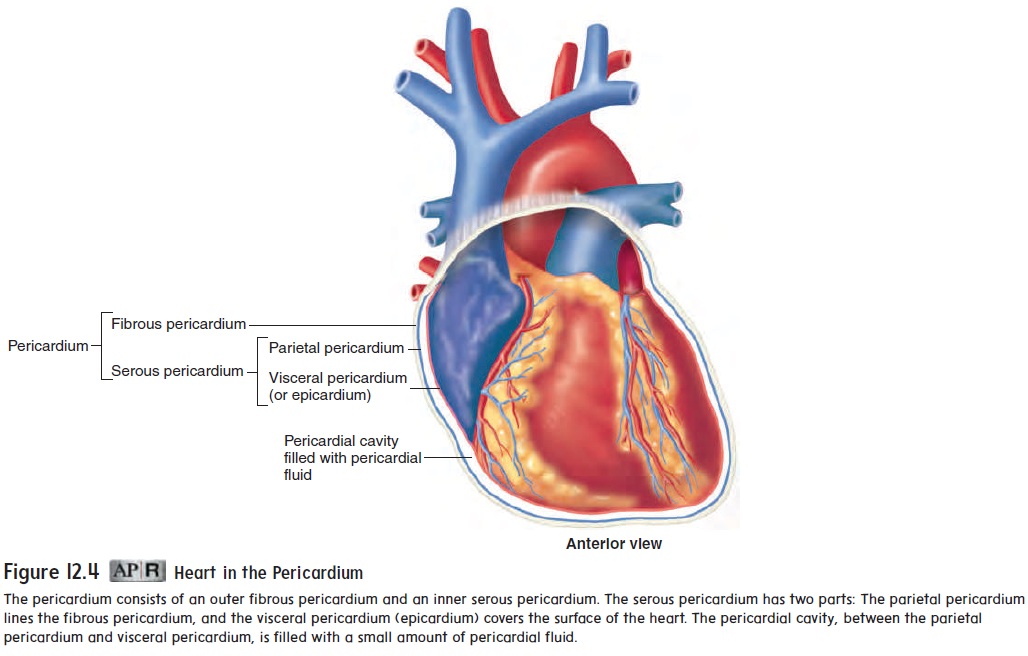 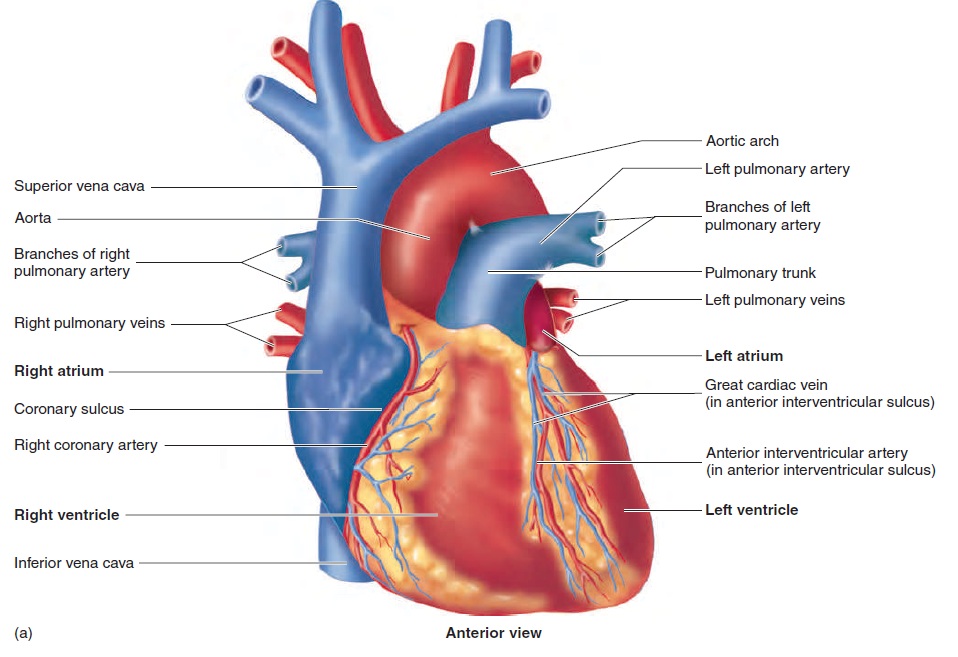 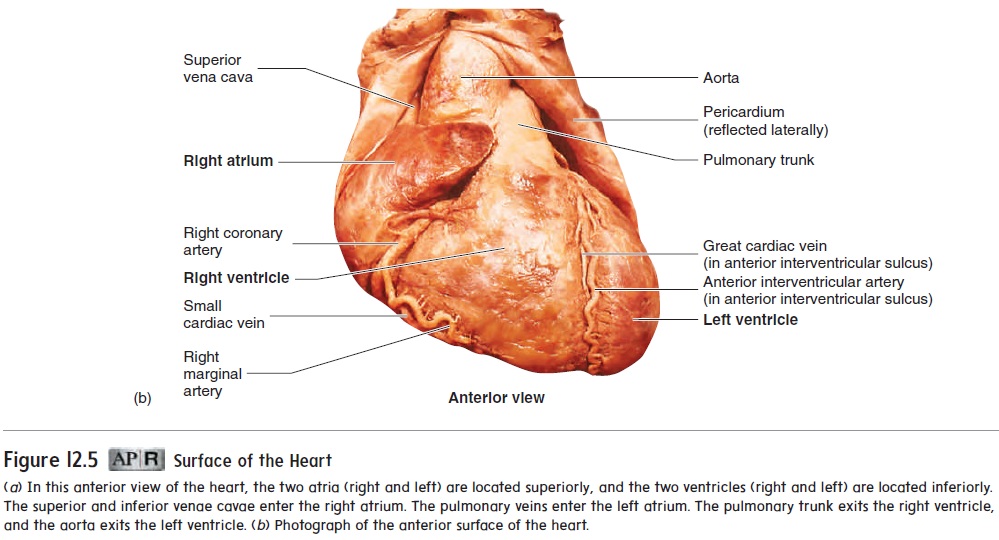 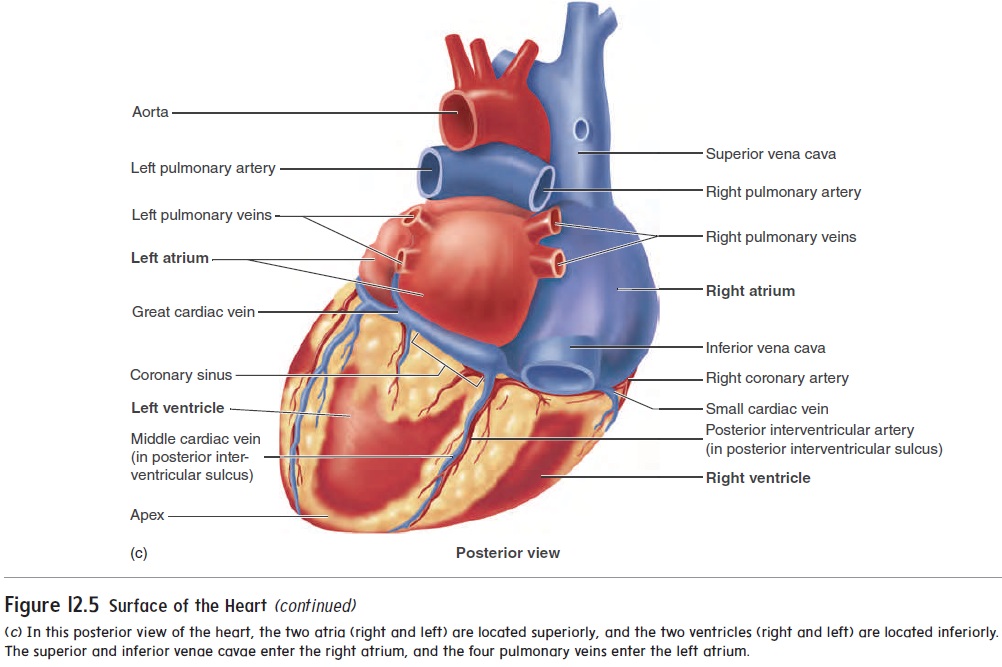 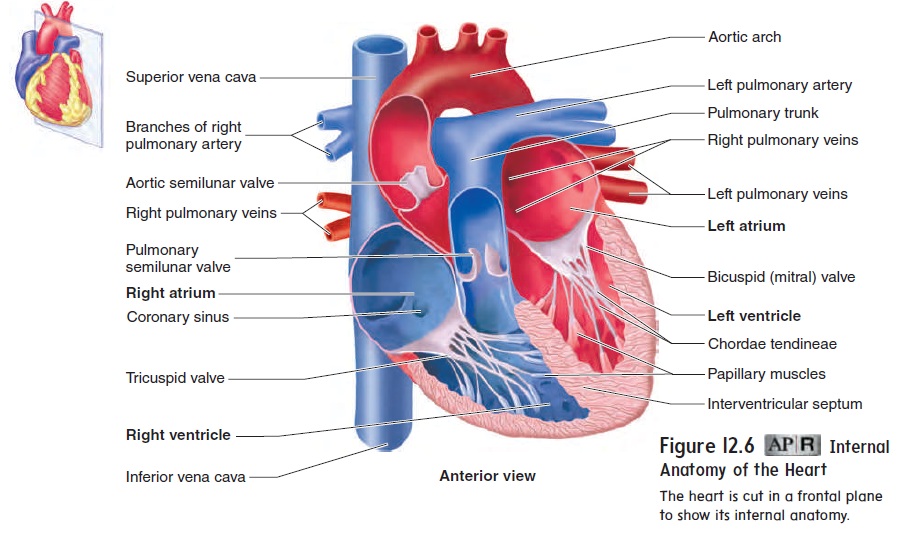 The atria of the heart receive blood from veins. The atria function primarily as reservoirs, where blood returning from veins collects before it enters the ventricles. Contraction of the atria forces blood into the ventricles to complete ventricular filling. The right atrium receives blood through three major openings. The superior vena cava and the inferior vena cava drain blood from most of the body (figure 12.6), and the smaller coronary sinus drains blood from most of the heart muscle. The left atrium receives blood through the four pulmonary veins, which drain blood from the lungs. The two atria are separated from each other by a partition called the interatrial (between the atria) septum.

Each ventricle contains cone-shaped, muscular pillars called papillary (pap′-l̄ar-ē) muscles. These muscles are attached bythin, strong, connective tissue strings called chordae tendineae (kō r′ dē ten′ di-nē -ē ; heart strings) to the free margins of the cusps of the atrioventricular valves. When the ventricles contract, the papillary muscles contract and prevent the valves from opening into the atria by pulling on the chordae tendineae attached to the valve cusps (see figures 12.6 and 12.7a; figure 12.8). 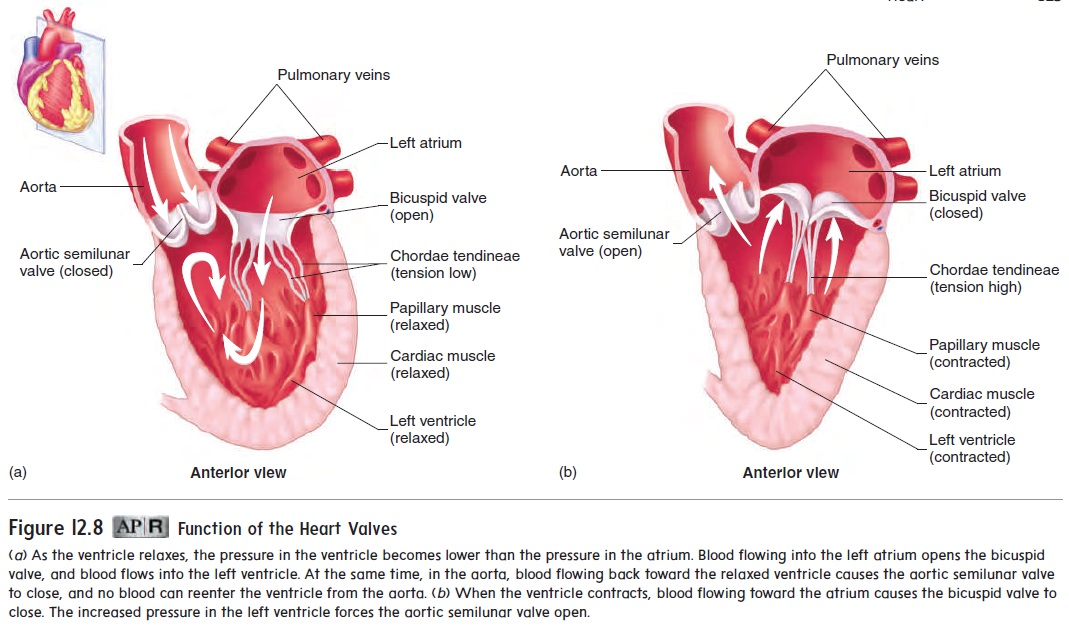 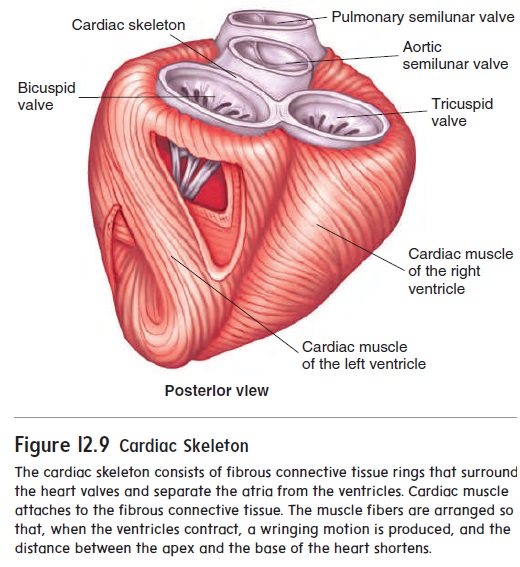 A plate of connective tissue, sometimes called the cardiacskeleton, consists mainly of fibrous rings that surround the atrio-ventricular and semilunar valves and give them solid support (figure 12.9). This connective tissue plate also serves as electrical insulation between the atria and the ventricles and provides a rigid attachment site for cardiac muscle.

Route Of Blood Flow Through The Heart

The route of blood flow through the heart is depicted in figure 12.10. Even though blood flow is described for the right and then the left side of the heart, it is important to understand that both atria contract at the same time, and both ventricles contract at the same time. This concept is most important when considering the electrical activity, pressure changes, and heart sounds. 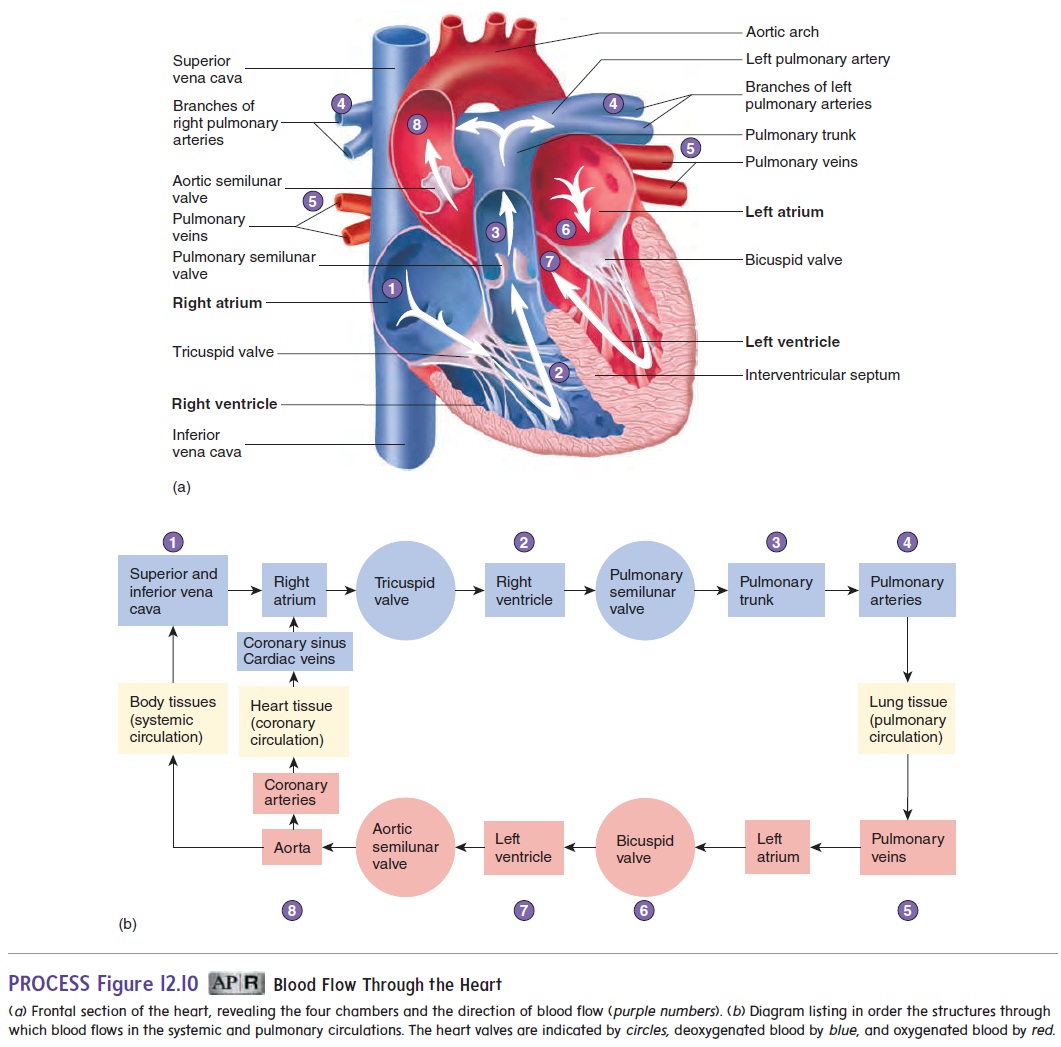 The pulmonary trunk branches to form the right and left pulmonary arteries, which carry blood to the lungs, where CO2 is released and O2 is picked up. Blood returning from the lungs enters the left atrium through the four pulmonary veins (figure 12.10).

Blood Supply to the Heart 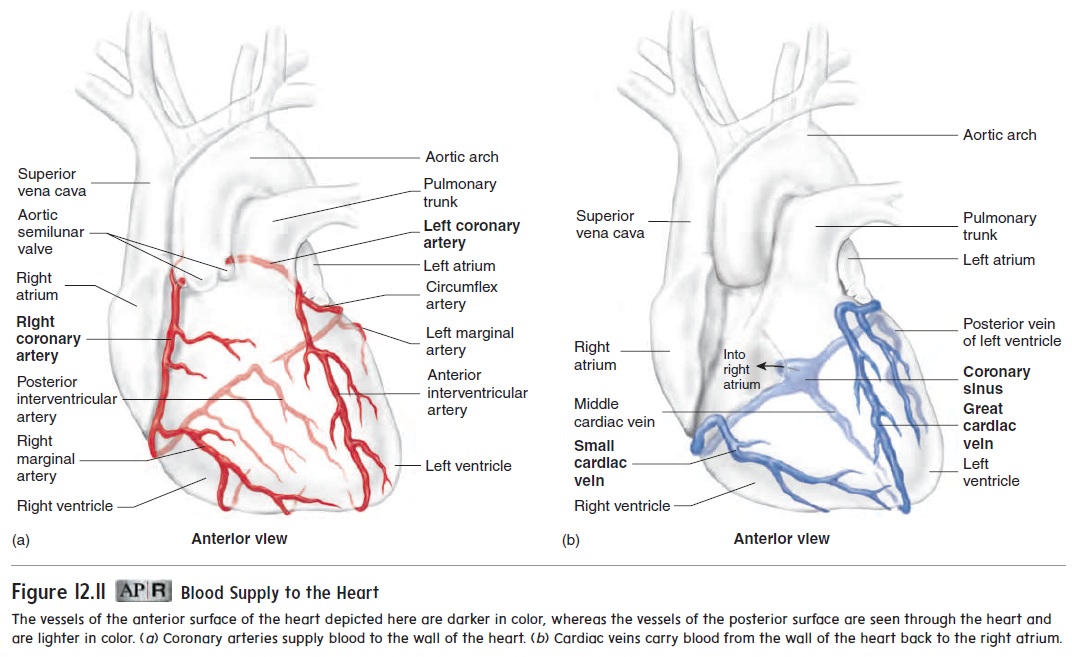 In a resting person, blood flowing through the coronary arter-ies gives up approximately 70% of its O2. In comparison, blood flowing through arteries to skeletal muscle gives up only about 25% of its O2. The percentage of O2 the blood releases to skeletal muscle increases to 70% or more during exercise, but the percent-age of O2 the blood releases to cardiac muscle cannot increase substantially during exercise. Therefore, the rate of blood flow through the coronary arteries must increase above its resting level to provide cardiac muscle with adequate O2 during exercise. Blood flow into the coronary circulation is greatest while the ventricles of the heart are relaxed and contraction of the cardiac muscle does not compress the coronary arteries. Blood flow into other arteries of the body is highest during contraction of the ventricles.