The relative reactivity of the four different acid derivatives is determined by the relative electrophilicities of the carbonyl carbon atom. Neighboring electronegative atoms increase the electrophilicity of the carbonyl group through an inductive effect. The greater the electronegativity of the neigh-boring atom, the greater the effect. Chlorine is more electronegative than oxygen, and oxygen is more electronegative than nitrogen. Thus, acid chlo-rides are more reactive than acid anhydrides and esters, while amides are the least reactive of the acid derivatives. Resonance effects play a role in diminishing the electrophilic character of the carbonyl carbon. Neighboring atoms containing a lone pair of electrons can feed these electrons into the carbonyl center to form a resonance structure where the carbonyl π bond is broken. This resonance is significant in amines where nitrogen is a good nucleophile, but is insignificant in acid chlorides where chlorine is a poor nucleophile. Resonance involving oxygen is weak but significant enough to explain the difference in reactivity between acid anhydrides and esters. Since the resonance in acid anhydrides is split between two carbonyl groups, the decrease in reactivity is less significant than in esters.

Bulky groups attached to the carbonyl group can hinder the approach of nucleophiles and result in lowered reactivity. Bulky nucleophiles will also react more slowly.

But why is there this difference in reactivity? The first step in the nucleophilic substitution mechanism (involving the addition of a nucleophile to the electrophilic carbonyl carbon) is the rate-determining step. Therefore, the more electrophilic this carbon is, the more reactive it will be. The nature of Y has a significant effect in this respect (Fig. 2). 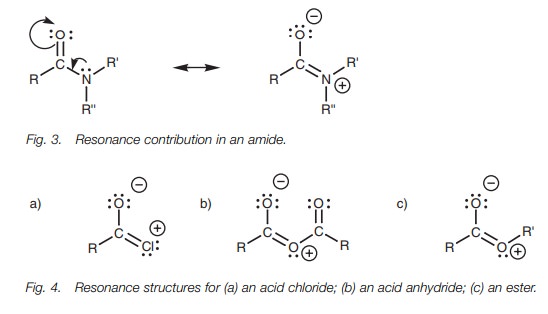 In theory, this resonance could also occur in acid chlorides, acid anhydrides, and esters to give resonance structures (Fig. 4). However, the process is much less important since oxygen and chlorine are less nucleophilic than nitrogen. In these structures, the positive charge ends up on an oxygen or a chlorine atom. These atoms are more electronegative than nitrogen and less able to stabilize a positive charge. These resonance structures might occur to a small extent with esters and acid anhydrides, but are far less likely in acid chlorides. This trend also matches the trend in reactivity.

Steric factors can play a part in the reactivity of acid derivatives. For example, a bulky group attached to the carbonyl group can hinder the approach of nucleophiles and hence lower reactivity. The steric bulk of the nucleophile can also have an influence in slowing down the reaction. For example, acid chlorides react faster with primary alcohols than they do with secondary or tertiary alcohols. This allows selective esterification if a molecule has more than one alcohol group present (Fig. 6).

However, carboxylic acids can undergo nucleophilic substitution if they are activated in advance.