There are two steps in the nucleophilic substitution of a carboxylic acid derivative with a charged nucleophile. The first step is the same as the first step of nucleophilic addition to aldehydes and ketones. The second step involves reformation of the carbonyl group and expulsion of the leaving group.

The mechanism of nucleophilic substitution with neutral nucleophiles is the same as the mechanism for charged nucleophiles, except that an extra step is required in order to remove a proton.

Aldehydes and ketones undergo nucleophilic addition rather than nucleo-philic substitution since the latter mechanism would require the cleavage of a strong C–H or C–C bond with the generation of a highly reactive hydride ion or carbanion.

We shall use the reaction in Fig. 1 to illustrate the mechanism of nucleophilic sub- stitution (Fig. 2). The methoxide ion uses one of its lone pairs of electrons to form a bond to the electrophilic carbonyl carbon of the acid chloride. At the same time, the relatively weak π bond of the carbonyl group breaks and both of the π electrons move onto the carbonyl oxygen to give it a third lone pair of electrons and a negative charge. This is exactly the same first step involved in nucleophilic addition to aldehydes and ketones. However, with an aldehyde or a ketone, the tetrahedral structure is the final product. With carboxylic acid derivatives, the lone pair of electrons on oxygen returns to reform the carbonyl π bond (Step 2). 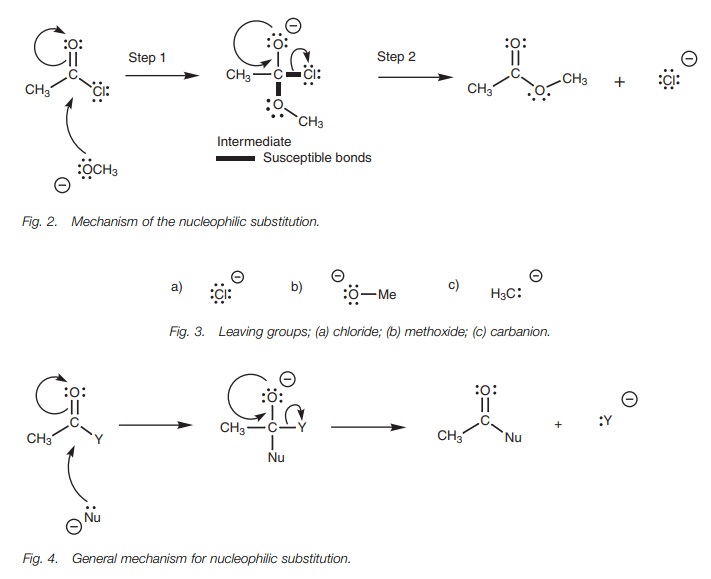 As this happens, the C–Cl bond breaks with both electrons moving onto the chlorine to form a chloride ion which departs the molecule. This explains how the prod-ucts are formed, but why should the C–Cl σ bond break in preference to the C–OMe σ bond or the C–CH3σ bond? The best explanation for this involves look-ing at the leaving groups which would be formed from these processes (Fig. 3). The leaving groups would be a chloride ion, a methoxide ion and a carbanion, respectively. The chloride ion is the best leaving group because it is the most stable. This is because chlorine is more electronegative than oxygen or carbon and can stabilize the negative charge. This same mechanism is involved in the nucle-ophilic substitutions of all the other carboxylic acid derivatives and a general mechanism can be drawn (Fig. 4).

Acid chlorides are sufficiently reactive to react with uncharged nucleophiles. For example, ethanoyl chloride will react with methanol to give an ester (Fig. 5). Oxygen is the nucleophilic center in methanol and uses one of its lone pairs of electrons to form a new bond to the electrophilic carbon of the acid chloride (Fig.6). As this new bond forms, the carbonylπbond breaks and both electrons moveonto the carbonyl oxygen to give it a third lone pair of electrons and a negative charge (Step 1). Note that the methanol oxygen gains a positive charge since it has effectively lost an electron by sharing its lone pair with carbon in the new bond. A positive charge on oxygen is not very stable and so the second stage in the mech-anism is the loss of a proton. Both electrons in the O–H bond move onto the oxy-gen to restore a second lone pair of electrons and thus neutralize the charge. Methanol can aid the process by acting as a base. The final stage in the mechanism is the same as before. The carbonyl π bond is reformed and as this happens, the C–Cl σ bond breaks with both electrons ending up on the departing chloride ion as a fourth lone pair of electrons. Finally, the chloride anion can remove a proton from CH3OH2 to form HCl and methanol (not shown).

The above mechanism is essentially the same mechanism involved in the reaction of ethanoyl chloride with sodium methoxide, the only difference being that we have to remove a proton during the reaction mechanism.

The same mechanism holds true for nucleophilic substitutions of other car- boxylic acid derivatives with neutral nucleophiles and we can write a general mechanism (Fig. 7). In practice, acids or bases are often added to improve yields..