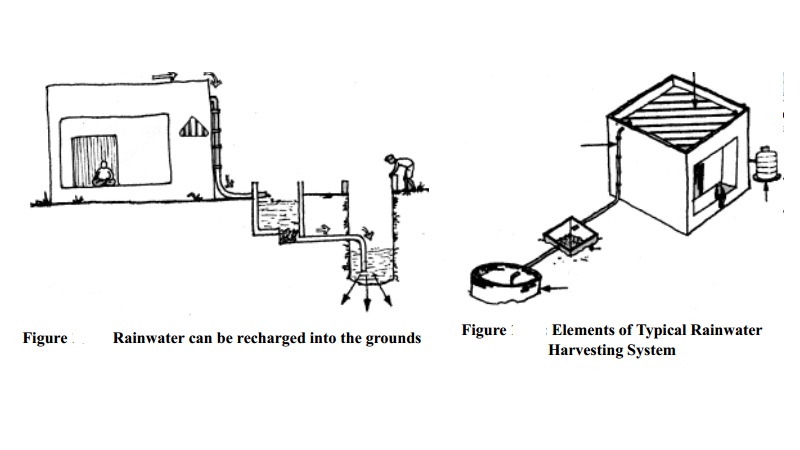 Rainwater harvesting may be defined as process of augmenting the natural infiltration of rainwater or surface run off into the ground by some artificial methods. The methods suggested are recharge through pits, trenches, bore well shafts by directly diverting run off water into existing or disused wells or conserving the rain water by artificial storing and using the same for human use.

Rainwater harvesting may be defined as process of augmenting the natural infiltration of rainwater or surface run off into the ground by some artificial methods. The methods suggested are recharge through pits, trenches, bore well shafts by directly diverting run off water into existing or disused wells or conserving the rain water by artificial storing and using the same for human use. The choice and effectiveness of any particular method is governed by local hydrological and soil conditions and ultimate use of water.

Need for Rainwater Harvesting: Nature replenishes the ground water resources annually through rainfall; by way of infiltration though soil layers. In urban areas, due to urbanization, the soil surface exposed to natural recharge gets reduced. Therefore, natural recharge is diminishing, resulting in drying of wells. Groundwater source has the benefit of availability where water is needed and during emergencies and scarcity period, the public at large or NGOs should take measures to improve the groundwater recharge by rain water harvesting to maintain reliable and sustainable groundwater resources.

Rainwater Harvests and Techniques: For many countries, particularly those with monsoonal climates and long dry seasons, water shortages result not from a lack of rainfall but from a seasonally uneven supply. When annual rainfall is concentrated in a few months, storage is difficult. To illustrate, India has 2.1 trillion cubic metres of freshwater available each year, and the United States has 2.5 trillion cubic metres. While rain falls in the United States throughout the year, in India, which is geographically only one third as large, most of the rainfall comes between mid-June and mid-September. As a result, most of this deluge runs off and is quickly carried back to the sea by the country's rivers. Although there are thousands of dams in India, they can collectively store only a fraction of the rainfall.

The focus on building large dams to capture and store surface water before it runs off dominated most of the last century. But because sites were becoming scarce and because the construction of large dams often inundates large areas, displacing local populations and irreversibly altering local ecosystems, this era has now largely run its course. More and more countries are turning to local water harvesting to ensure adequate supply.

In Rajasthan, where water shortages constrain development and prevent people from escaping poverty, the villagers under the leadership of a movement helped design local water storage facilities. Once villagers helped select a site, they would organize to build an earthen dam. All the materials, the stone and the earth, were local. So too was the labour - sweat equity provided by the villagers. The leader would help with the engineering and design. He told villagers that in addition to meeting their daily needs for water, the seepage from the small reservoir would gradually raise the water table, restoring wells that had been abandoned. He also told them this would take time. It worked exactly as he said it would. The initial success led to the creation of a local non-governmental organization with 45 full-time employees and 230 part-timers. Funded by the Ford Foundation and other groups, it has not only helped build 4,500 local water storage structures in Rajasthan, it has also raised villagers- incomes and improved their lives

When the local topography is favourable for building successful small water storage structures, this can be a boon for local communities. This approach works not only in monsoonal climates, but also in arid regions where low rainfall is retained for local use. With a modest amount of engineering guidance, hundreds of thousands of communities worldwide can build water storage works.

Another technique to retain rainfall is the construction of ridge terraces on hillsides to trap rainfall near where it falls, letting it soak into the soil rather than run off. Using a plow to establish the ridges, local farmers can build these terraces on their own, but they are more successful if they are guided by a surveyor who helps establish the ridgelines and determines how far apart the ridges or terraces should be on the hill. Once the terraces are established, the moisture that accumulates behind them can help support vegetation, including trees that can both stabilize the ridges and produce fruit and nuts or fuel wood. The terraces, which are particularly well adapted to the hilly agricultural regions of semiarid regions of India Africa, can markedly raise land productivity because they conserve both water and soil.

With the coming of more so called advanced technology including sophisticated groundwater survey and exploration equipment, with the installation of hand pumps and piped water supply schemes, the importance of people's technologies and community solutions was devalued. There is thus a need to go back to learn the important lessons from the past on how communities have solved their drinking water problems by collecting rain water on a large scale.

Methods of Rainwater Harvesting in Cities: Broadly the rain water can be harvested by two methods:

=      Store the rainwater in containers above or above grounds or below grounds; and

=      Recharge into soil for withdrawal later by groundwater recharging basis.

(b) in artificial ponds deepened to collect more water and (c) in unused and disused open wells where surface water is channeled for faster percolation into the ground, rainwater could be usefully harvested and at much lower costs.

What will this achieve?

=      it will be a long term solution to drought proof villages

=      it will allow for faster percolation into the ground which will revitalise dry hand pumps for drinking water and open wells for irrigation. It is a far more inexpensive and economic way of providing drinking water than drilling for new sources.

=      it will allow for the community of users to manage and control the water and reduce dependency on government.

With the barefoot architects constructing the rainwater harvesting tanks using local materials, traditional knowledge and skills, it demonstrates how there is no need to bring urban skills from outside.