We’ve been focusing on the first step involved in memory—namely memory acquisition.

We’ve been focusing on the first step involved in memory—namely memory acquisi-tion. Once a memory is acquired, though, it must be held in storage—i.e., held in long-term memory until it’s needed. The mental representation of this new information is referred to as the memory trace—and, surprisingly, we know relatively little about exactly how traces are lodged in the brain. At a microscopic level: Presynaptic neurons can become more effective in sending signals; postsynaptic neurons can become more sensitive to the signals they receive; and new synapses can be created.

On a larger scale, evidence suggests that the trace for a particular past experience is not recorded in a single location within the brain. Instead, different aspects of an event are likely to be stored in distinct brain regions—one region containing the visual ele-ments of the episode, another containing a record of our emotional reaction, a third area containing a record of our conceptual understanding of the event, and so on (e.g., A. Damasio & H. Damasio, 1994). But, within these broad outlines, we know very little about how the information content of a memory is translated into a pattern of neural connections. Thus, to be blunt, we are many decades away from the science-fiction notion of being able to inspect the wiring of someone’s brain in order to discover what he remembers, or being able to “inject” a memory into someone by a suitable rearrange-ment of her neurons. (For a recent hint about exactly how a specific memory might be encoded in the neurons, see Han et al., 2009.)

One fact about memory storage, however, is well established: Memory traces aren’t created instantly. Instead, a period of time is needed, after each new experience, for the record of that experience to become established in memory. During that time, memory consolidation is taking place; this is a process, spread over several hours, inwhich memories are transformed from a transient and fragile status to a more perma-nent and robust state (Hasselmo, 1999; McGaugh, 2000, 2003; Meeter & Murre, 2004; Wixted, 2004).

What exactly does consolidation accomplish? Evidence suggests that this time period allows adjustments in neural connections, so that a new pattern of communica-tion among neurons can be created to represent the newly acquired memory. This process seems to require the creation of new proteins, so it is disrupted by chemical manipulations that block protein synthesis (H. Davis & Squire, 1984; Santini, Ge, Ren, deOrtiz, & Quirk, 2004; Schafe, Nader, Blair, & LeDoux, 2001).

The importance of consolidation is evident in the memory loss sometimes produced by head injuries. Specifically, people who have experienced blows to the head can develop retrograde amnesia (retrograde means “in a backward direction”), in which they suffer a loss of memory for events that occurred before the brain injury (Figure 8.9). This form of amnesia can also be caused by brain tumors, diseases, or strokes (Cipolotti, 2001; M. Conway & Fthenaki, 1999; Kapur, 1999;Mayes, 1988; Nadel & Moscovitch, 2001). 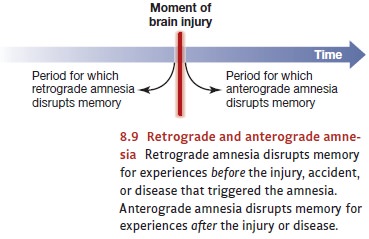 Retrograde  amnesia  usually  involves  recent  memories. In  fact, the older the memory, the less likely it is to be affected by the amnesia—a pattern referred to as Ribot’s law, in honor of the 19th-century scholar who  first  discussed  it  (Ribot,  1882).  What  produces  this  pattern? Older memories have presumably had enough time to consolidate, so they  are  less  vulnerable  to  disruption.  Newer  memories  are  not  yet  consolidated,  so they’re more liable to disruption (A. Brown, 2002; Weingartner & Parker, 1984). There is, however, a complication here: Retrograde amnesia sometimes disrupts a person’s  memory  for  events  that  took  place  months  or  even  years  before  the  brain injury. In  these  cases, interrupted  consolidation  couldn’t  explain  the  deficit  unlessone assumes—as some authors do—that consolidation is an exceedingly long, drawn-out process. (For discussion of when consolidation takes place, and how long it takes, see Hupbach et al., 2008; McGaugh, 2000.) However, this issue remains a point of debate, making it clear that we haven’t heard the last word on how consoli-dation proceeds.