One clue comes from the fact that it’s almost always easier to recall recent events (e.g., yesterday’s lecture or this morning’s breakfast) than it is to recall more distant events (a lecture or a breakfast 6 months ago).

There are many reasons why we sometimes cannot recall past events. In many cases, as we’ve noted, the problem arises because we didn’t learn the relevant information in the first place! In other cases, though, we learn something—a friend’s name, the lyrics to a song, the content of the Intro Bio course—and can remember the information for a while; but then, sometime later, we’re unable to recall the information we once knew. What produces this pattern?

One clue comes from the fact that it’s almost always easier to recall recent events (e.g., yesterday’s lecture or this morning’s breakfast) than it is to recall more distant events (a lecture or a breakfast 6 months ago). In technical terms, recall decreases, and forgetting increases, as the retention interval (the time that elapses between learning and retrieval) grows longer and longer.

This simple fact has been documented in many studies; indeed, the passage of time seems to work against our memory for things as diverse as past hospital stays, our eating or smoking habits in past years, car accidents we experienced, our con-sumer purchases, and so on (Jobe, Tourangeau, & Smith, 1993). The classic demon-stration of this pattern, though, was offered more than a century ago by Hermann Ebbinghaus (1850–1909). Ebbinghaus systematically studied his own memory in a series of careful experiments, examining his ability to retain lists of nonsense sylla-bles, such as zup and rif. (Ebbinghaus relied on these odd stimuli as a way of making sure he came to the memory materials with no prior associations or links; that way, he could study how learning proceeded when there was no chance of influence from prior knowledge.) Ebbinghaus plotted a forgetting curve by testing himself at vari-ous intervals after learning (using different lists for each interval). As expected, he found that memory did decline with the passage of time. However, the decline was uneven; it was sharpest soon after the learning and then became more gradual (Ebbinghaus, 1885; Figure 8.12). 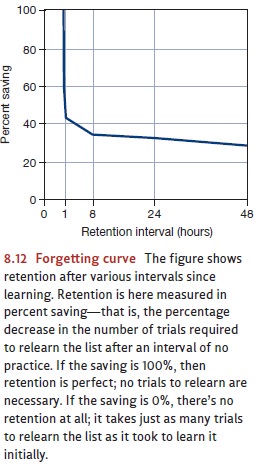 There are two broad ways to think about the effect of retention interval. One per-spective emphasizes the passage of time itself—based on the idea that memories decay as time passes, perhaps because normal metabolic processes wear down the memory traces until they fade and finally disintegrate. A different perspective suggests that time itself isn’t the culprit. What matters instead is new learning—based on the idea that new information getting added to long-term memory somehow disrupts the old informa-tion that was already in storage. We’ll need to sort through why this disruption might happen; but notice that this perspective, too, predicts that longer retention intervals will lead to more forgetting—because longer intervals provide more opportunity for new learning and thus more disruption from the new learning.

Which perspective is correct? Is forgetting ultimately a product of the passage of time, or a product of new learning? The answer is both. The passage of time, by itself, does seem to erode memories (e.g., E. Altmann & Gray, 2002; C. Bailey & Chen, 1989; Wixted, 2004); but the effect of new learning seems larger. For example, Baddeley and Hitch (1977) asked rugby players to recall the names of the other teams they had played against over the course of a season; the researchers then systematically compared the effect of timewith the effects of new learning. To examine the effects of time, Baddeley and Hitch capitalized on the fact that not all players made it to all games (because of illness, injuries, or schedule conflicts).  These  differences  allowed  them  to  compare  players  for whom “two games back” means 2 weeks ago, to players for whom “two games back” means 4 weeks ago. Thus, they were able to look at the effects of time (2 weeks vs. 4) with the number of more recent games held constant. Likewise, to examine the effects of new learning, these researchers compared (say) players for whom the game a month ago was “three games back” to players for whom a month ago means “one game back.” Now we have the retention interval held constant, and we can look at the effects of intervening events. In this setting, Baddeley and Hitch report that the mere passage of time accounts for very little; what really matters is the number of inter-vening events—just as we’d expect if intervening learning, and not decay, is the major con-tributor to forgetting (Figure 8.13). (For other—classic—data on this issue, see Jenkins & Dallenbach, 1924; for a more recent review, see Wixted, 2004.) 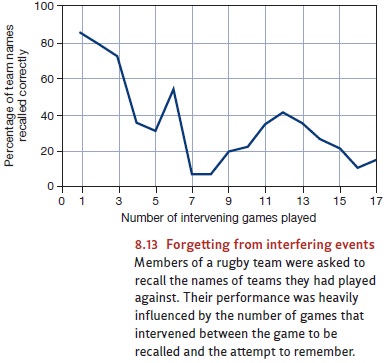 An effect of new learning undoing old learning can also be demonstrated in the lab-oratory. In a typical study, a control group learns the items on a list (A) and then is tested after a specified interval. The experimental group learns the same list (A), but they must also learn the items on a second list (B) during the same retention interval. The result is a marked inferiority in the performance of the experimental group. List B seems to interfere with the recall of list A (Crowder, 1976; McGeoch & Irion, 1952).

Of course, not all new learning produces this disruption. No interference is observed, for example, between dissimilar sorts of material—and so learning to skate doesn’t undo your memory for irregular French verbs. In addition, if the new learning is consistent with the old, then it certainly doesn’t cause disruption; instead, the new learning actually helps memory. Thus, learning more algebra helps you remember the algebra you mastered last year; learning more psychology helps you remember the psy-chology you’ve already covered.