How does memory acquisition proceed? The answer has to begin with the fact that we have several types of memory, each with different properties, and each type plays its own role in the acquisition process.

How does memory acquisition proceed? The answer has to begin with the fact that we have several types of memory, each with different properties, and each type plays its own role in the acquisition process. Historically, these different types have been described in terms of the stage theory of memory, which proposed (among other points) that memory acquisition could be understood as dependent on three types of memory: When information first arrived, it was stored briefly in sensory memory, which held onto the input in “raw” sensory form—an iconic memory for visual inputs and an echoic mem-ory for auditory inputs. A process of selection and interpretation then moved the infor-mation into short-term memory—the place you hold information while you’re working on it. Some of the information was then transferred into long-term memory, a much larger and more permanent storage place (Atkinson & Shiffrin, 1968; Broadbent, 1958; Waugh & Norman, 1965).

This early conception of memory captured some important truths—but needs to be updated in several ways. As one concern, the idea of “sensory memory” plays a much smaller role in modern theorizing and so, for example, many discussions of visual infor-mation processing  make no mention of iconic memory. In addition, modern proposals use the term working memory rather than short-term memory to emphasize the function of this memory: Ideas or thoughts in this memory are currently activated, currently being thought about—and so they’re the ideas you are currently working on. Long-term memory, in contrast, is the vast depository that contains all of your knowledge and all of your beliefs that you happen not to be thinking about at the moment, and this includes your beliefs about relatively recent events. Thus, if just a few minutes ago you were thinking about your weekend plans but now you’re thinking about something else, these plans are gone from working memory (because you’re no longer working on them); and so, if you can recall your plans, you must be drawing them from long-term memory.

Let’s note, though, that what’s at stake here is more than a shift in terminology, because the modern view also differs from the stage theory in how it conceptualizes memory. In the older view, working memory was understood broadly as a storage place, and it was often described as the “loading dock” just outside the long-term memory “warehouse.” In the modern conception, working memory is not a “place” at all; instead, it’s just the name we give to a status. When we say that ideas are “in working memory,” this simply means—as we’ve already noted—that these ideas are currently activated. This focus on status is also the key to understanding the difference between working memory and long-term memory—the modern conception emphasizes whether the mental content is currently active (working memory) or not (long-term memory), in contrast to older theory’s empha-sis on time frame (“short term” or “long”).

Why should we take this broad proposal seriously? Why should we make any distinc-tion between working memory and long-term memory, and why should we think about working memory in the way we’ve just described? As a first step toward answering these questions, consider the results of studies in which participants hear a series of unrelated words—perhaps 15 words in total, or 20, presented one word at a time. At the end of the list, the participants are asked to recall the items in any order they choose (this is why the participants’ task is called free recall—they’re free to recall the items in any sequence).

In this task, there’s a reliable pattern for which words the participants recall and which ones they don’t. Words presented at the beginning of the list are very likely to be recalled; this memory advantage for early-presented words is called the primacy effect. Likewise, the last few words presented are also likely to be recalled; this is the recency effect. The likelihood of recall is appreciably poorer for words in the middle of the list (Figure 8.2) 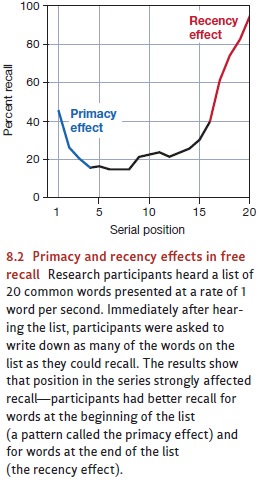 What creates this pattern? As the to-be-remembered words are presented, the participants pay attention to them, and this ensures the activated status that we call “working memory.” There’s a limit, however, on how many things someone can think about at once, and so there’s a limit on how many items can be maintained in working memory. According to many authors, this limit is seven items, give or take one or two; the capacity of working memory is therefore said to be seven plus or minus two items (G. Miller, 1956). As a result, it’s just not possible for the participants to maintain all of the list words in their current thoughts. Instead, they’ll just do their best to “keep up” with the list as they hear it. Thus, at each moment during the list presentation, their working memories will contain only the half-dozen or so words that arrived most recently.

Notice that, in this situation, new words entering working memory will “bump out” the words that were there a moment ago. The only words that don’t get bumped out are the last few words on the list, because obviously no further input arrives to displace them. Hence, when the list presentation ends, these few words are still in working memory— still in the participants’ thoughts—so are easy to recall. This is why the participants reli-ably remember the end of the list; they are producing the result we call the recency effect.

The primacy effect comes from a different source. We know that these early words are not being recalled from working memory, because they were—as we’ve already noted— bumped from working memory by later-arriving words. It seems, therefore, that the pri-macy effect must involve long-term memory—and so, to explain why these early words are so well recalled, we need to ask how these words became well established in long-term storage in the first place.

The explanation lies in how participants allocate their attention during the list presentation. To put this in concrete terms, let’s say that the first word on the list is camera. When research participants hear this word, they can focus their full attentionon it, silently rehearsing “camera, camera, camera, . . .” When the second word arrives, they’ll rehearse that one too; but now they’ll have to divide their attention between the first word and the second (“camera, boat, camera, boat, . . .”). Attention will be divided still further after participants hear the third word (“camera, boat, zebra,camera, boat, zebra, . . .”), and so on through the list.

Notice that earlier words on the list get more attention than later ones. At the list’s start, participants can lavish attention on the few words they’ve heard so far. As they hear more and more of the list, though, they must divide their attention more thinly, simply because they have more words to keep track of. Let’s now make one more assumption: that the extra attention given to the list’s first few words makes it more likely that these words will be well established in long-term memory. On this basis, par-ticipants will be more likely to recall these early words than words in the middle of the list—exactly the pattern of the data.

Support for these interpretations comes from various manipulations that affect the pri-macy and recency effects. For example, what happens if we require research participants to do some other task immediately after hearing the words but before recalling them? This other task will briefly divert the participants’ attention from rehearsing or thinking about the list words—and so the words will be bumped out of working memory. Working mem-ory, in turn, was the hypothesized source of the recency effect, and so, according to our hypothesis, this other task—even if it lasts just a few seconds—should disrupt the recency effect. And indeed it does. If participants are required to count backward for just 30 seconds between hearing the words and recalling them, the recency effect is eliminated (Figure 8.3). 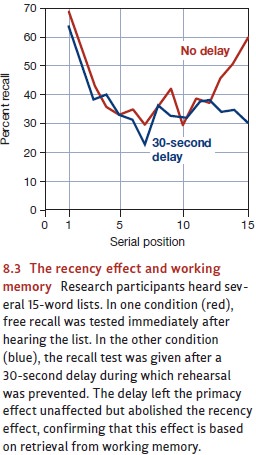 Other manipulations produce a different pattern—they alter the primacy effect but have no effect on recency. For example, if we present the list items more slowly, participants have time to devote more attention to each word. But we’ve just proposed that attention helps to establish words in long-term memory. We should therefore expect that a slower 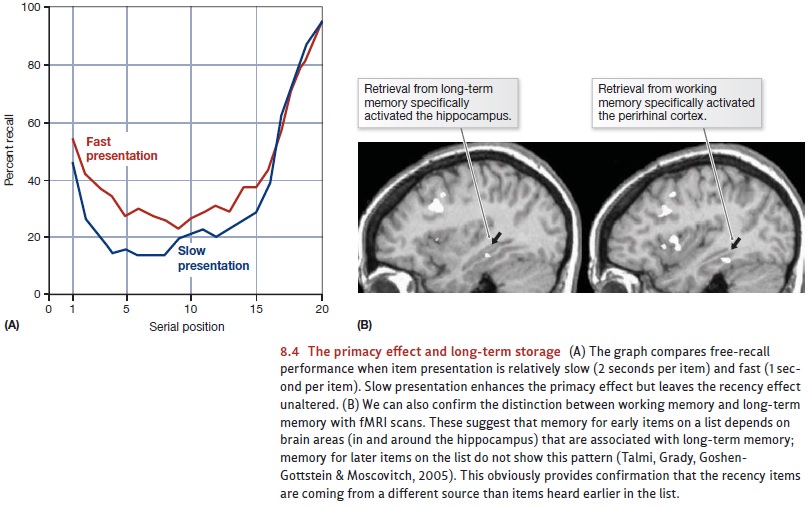 As we’ve mentioned, working memory has a limited capacity. There is, however, enormous flexibility in how we use that capacity—and so, if we can pack the input more efficiently, we can increase the amount of information maintained in this memory.

For example, consider an individual who tries to recall a series of digits that she heard only once:

If she treats this as a series of 16 unrelated digits, she’ll surely fail in her attempt to remember the series. But if she thinks of the digits as years (i.e., the year the U.S. Declaration of Independence was signed; the year of the new millennium; and the year the Normans invaded England), the task becomes much easier because now she has just three items to remember.

Cases like this one make it plain that working memory’s capacity can’t be measured in digits, or words, or kilobytes. Instead, the capacity is measured in chunks. This unscientific-sounding word helps us remember that this is a flexible sort of measure-ment, because what’s in a chunk depends on how the person thinks about, and organ-izes, the information. Thus, if a person thinks of each digit as a chunk, working memory

can hold (roughly) seven digits. If pairs of digits are chunked together, working mem-ory’s capacity will be more than a dozen digits.

To see how important chunking can be, consider a remarkable individual studied by Chase and Ericsson (Chase & Ericsson, 1978, 1979, 1982; Ericsson, 2003). This fellow happens to be a fan of track events, and when he hears numbers, he thinks of them as finishing times for races. The sequence “3, 4, 9, 2,” for example, becomes “3 minutes and 49 point 2 seconds, near world-record mile time.” In this way, four digits become one chunk of information. The man can then retain seven finishing times (seven chunks) in memory, and this can involve 20 or 30 digits. Better still, these chunks can be grouped into larger chunks, and these into even larger ones. For example, finishing times for individual racers can be chunked together into heats within a track meet, so that, now, 4 or 5 finishing times (more than 12 digits) become one chunk. With strate-gies like this and with a lot of practice, this man has increased his apparent memory capacity from the “normal” 7 digits to 79 digits!

Let’s be clear, though, that what has changed through practice is merely the man’s chunking strategy, not the holding capacity of working memory itself. This is evident in the fact that, when tested with sequences of letters rather than numbers—so he can’t use his chunking strategy—his memory capacity drops to a perfectly normal six conso-nants. Thus, the seven-chunk limit is still in place for this fellow, even though (with numbers) he’s able to make extraordinary use of these seven slots.