Problem Solving is the term used for thinking or thought processes that is specifically aimed at finding Solutions to specific problems.

Problem Solving is the term used for thinking or thought processes that is specifically aimed at finding Solutions to specific problems. This process contin-ues on spectrum from conceiving an idea through accomplishing goal by means a set of mental operations. 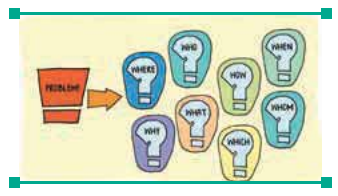 “The only way to solve a problem is to change the thinking that created it.” Albert Einstein (1879–1955)

The steps in problem solving are as follows

Awareness of the problem–An individ-ual has to be aware of the problem. If he senses that there is a problem he will know the way to solve it.

Example: What will happen to a boy who is absent continuously?

1. Recognition of the problem– The in-dividual has to understand the prob-lem by comparing his past experiences faced with present situation.

Example: All the students want to know what has happened to their favourite monitor

Example: One of the boy who lives nearby is spotted and asked to go to the monitor house. He finds out that his monitor is suffering from malarial fever.

3. Formulation of hypothesis - Hypothesis means “idea or suggestion put forward as a starting point for reasoning or explanation”. Hence a hypothesis may be right or wrong, accepted or rejected after its validity is verified completely.

Example: One may ask why the monitor alone was attacked by malarial fever. The boys try to formulate tentative guesses to the question. Perhaps the monitor visited someone who had malarial fever. Perhaps monitor slept without mosquito net at night, or water stagnation near his house.

4. Evaluation or testing of hypothesis: Hypothesis formulated is tested.

when monitor comes back to school after recovery from malarial fever he says that there is a big pond near his house where water stagnates and breeds mosquitoes. He also tells them that one night he did not use mosquito net because it was a very hot night.

5. Making of Generalisation –Finding a general principle to a particular situa-tion is called generalization.

i) One should not sleep without a mosquito net at night in swampy areas.

ii) One should maintain good habits so that he/she may not be attacked by a disease.

1. Intention - State the goal of the prob-lem to be solved

3. Investigate - What is the root cause?

4. Intervene - Limit the effect of the problem