1. Characteristics of Potable Water 2. Purification of Water 3. Hardness of Water

Imagine you are swimming in the sea and by accident you swallow some sea water. How would you feel? You would probably feel like vomiting! The sensation of feeling nauseous is because of a lot of salt in the water. Every litre of sea water contains 35 grams of dissolved salts most commonly known as sodium chloride (NaCl).

The salinity of water is more in the Dead sea. It is actually a salt lake as it has a single source of water and is not connected to the ocean. It is landlocked and this causes the water to evaporate. This has led to a steady increase in its degree of salinity. Now the salinity is so high such that the marine life cannot survive in it. This is why it is called the Dead sea. 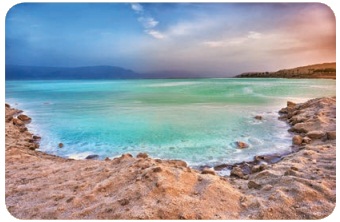 Such water is called saline water. It is not suitable for drinking and is said to be non-potable water.

The water suitable for drinking is called potable water. Every litre of potable water contains 1- 2 grams of dissolved salts, mainly common salt. In addition to the common salt, there are small amounts of calcium (Ca) , magnesium (Mg), potassium (K), copper (Cu) and zinc (Zn). The minerals in water give it a certain taste. In addition, these minerals are useful for our body’s metabolism. Potable water also contains dissolved gases.

The following are the characteristics of potable water.

* Potable water should be colourless and odourless.

* It should be transparent.

* It should be free from harmful micro-organisms such as bacteria, virus and protozoa.

* It should be free from impurities such as suspended solids.

* It should contain some minerals and salts, necessary for our body and some dissolved gases to add taste.

Take two pots with similar plants. Water one of the plants with tap water and the other with sea water. Record your findings and note the difference observed.

(i) Due to the high salinity of sea water, the plant starts to droop.

(ii) The plant which is watered with tap water grows well.

Out of the total fresh water available on the earth, only 1% is present in water bodies such as rivers and lakes and the rest is frozen in glaciers and polar-regions.

Water from these water bodies is unfit for drinking, cooking, washing or bathing because it contains suspended and dissolved impurities. It also contains micro-organisms such as bacteria. If this water is consumed without purifying, it can cause water-borne diseases such as typhoid and cholera. Therefore, water should be treated and purified before it reaches our home. In conventional water treatment plants (Figure 13. 6), water is subjected to different processes for purification. These processes are discussed here.

Every year 4. 6 million childrendie due to diarrhea. Access to clean water improves hygiene and health.

Water from lakes or rivers is collected in large sedimentation tanks. There, it is allowed to stand undisturbed so that suspended impurities settle down at the bottom of the tank. Sometimes, a chemical substance such as potash alum is added to water, to speed up the process of sedimentation. This process is called loading. The particles of potash alum combine with the suspended impurities and make them settle down at a faster rate.

Water from the sedimentation tanks is then, pumped to the filtration tanks. Filtration tanks contain filter beds made up of gravel, sand, pebbles, activated charcoal and concrete. Water passes through these layers and becomes free from any remaining dissolved or suspended impurities completely.

The filtered water is treated chemically to remove the remaining germs or bacteria. This process is called sterilisation. The chemicals that are used in this process are chlorine and ozone. The water from filtration tanks is pumped into chlorination tanks, where chlorine is added to remove harmful bacteria and other germs. The process of adding chlorine, in adequate amounts, to water is called chlorination. Ozonisation is a process in which water is treated with ozone gas to kill the germs present in it.

The sterilisation of water can also be done by exposing it to air and sunlight. Oxygen from the air and sunlight destroy the germs present in water. Aeration is the process in which air under pressure is blown into filtered water. This also helps to kill the germs.

RO purifiers are the purifiers that can remove the dissolved impurities and germs. They also improve the taste of water. RO standsfor the name of the technology, ‘reverse osmosis’, used in these purifiers. Some RO purifiers also have a UV (ultraviolet) unit that destroys the germs present in water.

We use soaps and detergents to wash clothes. They form lather with water that quickens the process of removal of dirt from the clothes. Water contains a number of dissolved salts and minerals. When these salts are present in very small quantities in water, it is called soft water. In this water, soaps or detergents form lather easily (Fig. 13. 7). 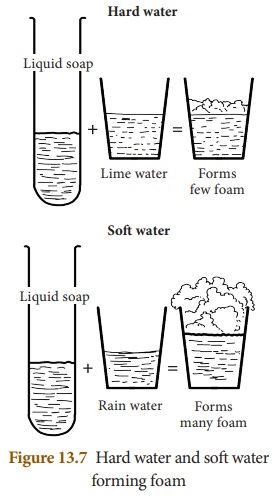 a. Disadvantages of hard water

* It is not good for washing clothes. It forms scum with soap and detergents, which makes the soap ineffective and also spoils the clothes further.

* It damages the utensils and containers in which it is stored and forms a hard layer.

* It forms scales on the machine parts used in industries and decreases their efficiency (Fig. 13. 8).

* It results in stomach ailments if consumed for a long period. 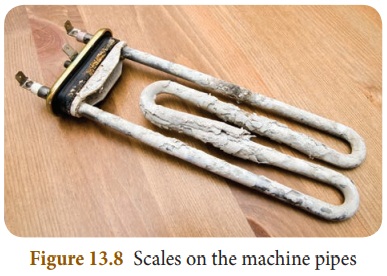 Take samples of water from different sources (like a tube well, a lake, a pond or a river) and pour equal quantities of each sample of water into different test tubes. Measure the height of water in each test tube with a scale. Add one or two drops of liquid soap to each test tube.

Shake each test tube five times and observe the height of the lather in each sample. Record your observations in the table. Which water is soft? Which water is hard? Can you say why? 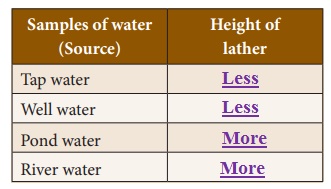 Which water is soft? Can you say why?

(i) Pond and river water are considered as soft due to presence of very small quantities of salts.

Which water is hard? Can you say why?

Answer: Tap and well water are considered as hard due to presence of large quantity of minerals and salts .

b. Removal of hardness

Different methods are followed to remove the hardness from water depending on whether it is temporary hardness or permanent hardness. Some of them are explained below.

Another method used to remove the hardness of water is to pass it through a columnof ion-exchange resins where calcium and magnesium ions get replaced by sodium ions. This converts hard water into soft water.

Temporary and permanent hardness both can be removed by the method of distillation. The water obtained after distillation is called distilled water. It is the purest form of water.

Distilled water and boiled water have no taste. The pleasant taste of drinking water is due to the presence of dissolved substances which include air, carbon dioxide and minerals.