Physical, Chemical of Properties of Water

Pure water is a clear and transparent liquid. It is colourless, odourless and tasteless.

• Pure water boils at 100° C at one atmospheric pressure.

• Pure water freezes at exactly 0°C at one atmospheric pressure. 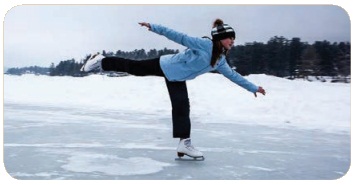 When ice cubes are put in a glass of water at room temperature, they float on the surface of the water. This is because ice is lighter than water. It means that the density of ice is lower than that of water. When the winter temperature is below 0°C, the water in the lake will start freezing. The frozen ice will float at the top and cover the lake. Since ice is a bad conductor of heat it does not allow heat to pass through it. So, the water below the ice remains in liquid form, where most of the aquatic life lives. This enables the aquatic animals and plants to survive even in extreme cold conditions. Density of water at different temperature is given in Table 13. 1. 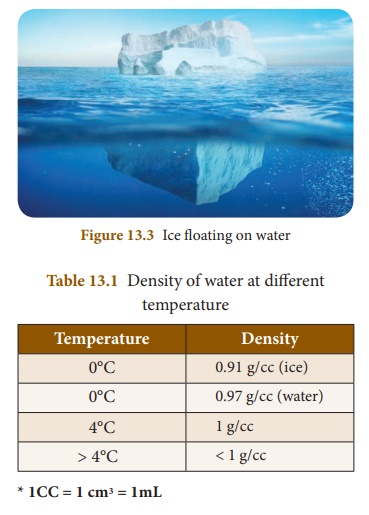 For the same mass of ice and of water, the volume of ice is more than that of water. It is an unusual physical property of water. In the Himalayas the temperature can go down even below 0°C. The water in the water pipes will freeze at this temperature to ice. If the pipes are not strong they can crack, develop leaks or even burst. This is because freezing of water will cause an expansion in the volume.

Take some ice cubes in a beaker and place a therometer in it. Now heat the beaker. The therometer will not register any rise in temperature till all the ice melts. The question arises where does the heat energy go if there is no rise in temperature. The heat energy is utilised in changing the state of ice from solid to liquid. The amount of heat energy required by ice to change into water is called latent heat of fusion of ice. Ice has the highest latent heat of fusion, i.e., 80 calories/g. or 336 J/g.

The freshness of fish and meat can be maintained by placing them in contact with ice. With its larger latent heat, ice is able to absorba large quantity of heat from the fish as it melts. Thus, food can be kept at a low temperature for an extended period of time. 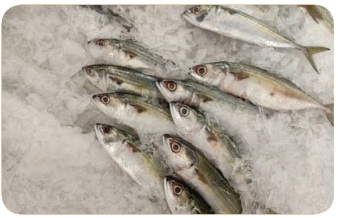 When water attains the temperature of 100°C, it starts changing its state from liquid to gaseous state. However, the temperature of water does not rise above 100°C. It is because the supplied heat energy only changes the state of the boiling water. This heat energy is stored in steam and is commonly called latent heat of vaporization of steam. The steam has the highest latent heat of vaporization and its value is 540 calories/g or 2268 J/g.

The amount of heat that is needed to raise the temperature of a unit mass of a substance by 1°C is called specific heat capacity of that substance. The specific heat capacity of water is very high. One gram of water requires 1 calorie of heat to raise its temperature by 1°C. Due to its high specific heat capacity, water takes time to become hot as well as to cool down. Thus, water can absorb a lot of heat and retain it for a longer time. This property of water is used to cool engines. Water is circulated around car engine using the radiator pump and the heat is absorbed. Thus the engine is protected from getting too hot. 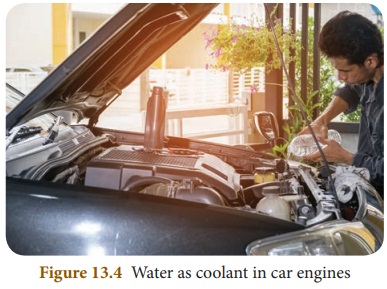 a. Action towards litmus paper

Pure water is neutral and it shows no action towards litmus paper.

Water is a very stable compound. It does not decompose into elements, when heated to ordinary temperatures. However, if it is heated to 200°C, 0.02% of water decomposes to form hydrogen and oxygen gas.

Water reacts with some metals. Metals such as sodium, potassium and calcium react vigorously with water at room temperature. Sodium reacts with water to form hydrogen gas and sodium hydroxide solution. Due to the heat evolved in this reaction the hydrogen gas catches fire and burns.

Fill a trough with water. Cut a small piece of sodium with a knife and carefully drop it in the water. Sodium reacts with water and darts across the surface of water. A flame produced is also seen near the surface.

Many other metals react with water to form oxides and hydroxides. Iron is one such metal which forms iron oxide, called rust. Iron is used in many buildings, factories, bridges, ships and vehicles. The slow and gradual rusting of iron is called corrosion.

Copper does not react with water at any temperature. That is why it is used for making pipes and boilers.