Postural and Locomotive Reflexes of the Cord

Positive Supportive Reaction. Pressure on the footpad ofa decerebrate animal causes the limb to extend against the pressure applied to the foot.

Reflexes of Posture and Locomotion

Postural and Locomotive Reflexes of the Cord

Positive Supportive Reaction. Pressure on the footpad ofa decerebrate animal causes the limb to extend against the pressure applied to the foot. Indeed, this reflex is so strong that if an animal whose spinal cord has been transected for several months—that is, after the reflexes have become exaggerated—is placed on its feet, the reflex often stiffens the limbs sufficiently to support the weight of the body. This reflex is called the positive supportive reaction.

The positive supportive reaction involves a complex circuit in the interneurons similar to the circuits responsible for the flexor and cross extensor reflexes.

The locus of the pressure on the pad of the foot deter-mines the direction in which the limb will extend; pres-sure on one side causes extension in that direction, an effect called the magnet reaction. This helps keep an animal from falling to that side.

Cord “Righting” Reflexes. When a spinal animal is laid onits side, it will make incoordinate movements trying to raise itself to the standing position. This is called  the cord righting reflex. Such a reflex demonstrates that some relatively complex reflexes associated with posture are integrated in the spinal cord. Indeed, an animal with a well-healed transected thoracic cord between the levels for forelimb and hindlimb innerva- tion can right itself from the lying position and even walk using its hindlimbs in addition to its forelimbs. In the case of an opossum with a similar transection of  the  thoracic  cord,  the  walking  movements  of the hindlimbs are hardly different from those in a normal opossum—except that the hindlimb walking movements are not synchronized with those of the forelimbs.

Stepping and Walking Movements Rhythmical Stepping Movements of a Single Limb. Rhythmi-cal stepping movements are frequently observed in the limbs of spinal animals. Indeed, even when the lumbar portion of the spinal cord is separated from the remainder of the cord and a longitudinal section is made down the center of the cord to block neuronal connections between the two sides of the cord and between the two limbs, each hindlimb can still perform individual stepping functions. Forward flexion of the limb is followed a second or so later by backward extension. Then flexion occurs again, and the cycle is repeated over and over.

This oscillation back and forth between flexor and extensor muscles can occur even after the sensory nerves have been cut, and it seems to result mainly from mutually reciprocal inhibition circuits within the matrix of the cord itself, oscillating between the neurons controlling agonist and antagonist muscles.

The sensory signals from the footpads and from the position sensors around the joints play a strong role in controlling foot pressure and frequency of stepping when the foot is allowed to walk along a surface. In fact, the cord mechanism for control of stepping can be even more complex. For instance, if the top of the foot encounters an obstruction during forward thrust, the forward thrust will stop temporarily; then, in rapid sequence, the foot will be lifted higher and proceed forward to be placed over the obstruction. This is the stumble reflex. Thus, the cord is an intelligent walkingcontroller.

Reciprocal Stepping of Opposite Limbs. If the lumbar spinalcord is not split down its center, every time stepping occurs in the forward direction in one limb, the oppo-site limb ordinarily moves backward.This effect results from reciprocal innervation between the two limbs.

Diagonal Stepping of All Four Limbs—“Mark Time” Reflex. Ifa well-healed spinal animal (with spinal transection in the neck above the forelimb area of the cord) is held up from the floor and its legs are allowed to dangle, as shown in Figure 54–12, the stretch on the limbs occa-sionally elicits stepping reflexes that involve all four limbs. In general, stepping occurs diagonally between the forelimbs and hindlimbs. This diagonal response is another manifestation of reciprocal innervation, this time occurring the entire distance up and down the cord between the forelimbs and hindlimbs. Such a walking pattern is called a mark time reflex. 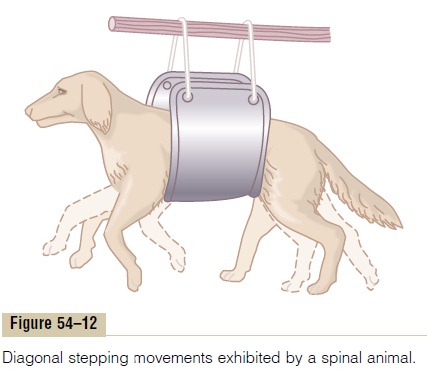 Galloping Reflex. Another type of reflex that occasion-ally develops in a spinal animal is the galloping reflex, in which both forelimbs move backward in unison while both hindlimbs move forward. This often occurs when almost equal stretch or pressure stimuli are applied to the limbs on both sides of the body at the same time; unequal stimulation elicits the diagonal walking reflex. This is in keeping with the normal pat-terns of walking and galloping, because in walking, only one forelimb and one hindlimb at a time are stim-ulated, which would predispose the animal to continue walking. Conversely, when the animal strikes the ground during galloping, both forelimbs and both hindlimbs are stimulated about equally; this predis-poses the animal to keep galloping and, therefore, con-tinues this pattern of motion.