Organization of the Spinal Cord for Motor Functions

The cord gray matter is the integrative area for the cord reflexes.

Organization of the Spinal Cord for Motor Functions

The cord gray matter is the integrative area for the cord reflexes. Figure 54–1 shows the typical organization of the cord gray matter in a single cord segment. Sensory signals enter the cord almost entirely through the sensory (posterior) roots. After entering the cord, every sensory signal travels to two separate destinations: (1) One branch of the sensory nerve ter-minates almost immediately in the gray matter of the cord and elicits local segmental cord reflexes and other local effects. (2) Another branch transmits signals to higher levels of the nervous system—to higher levels in the cord itself, to the brain stem, or even to the cere-bral cortex. 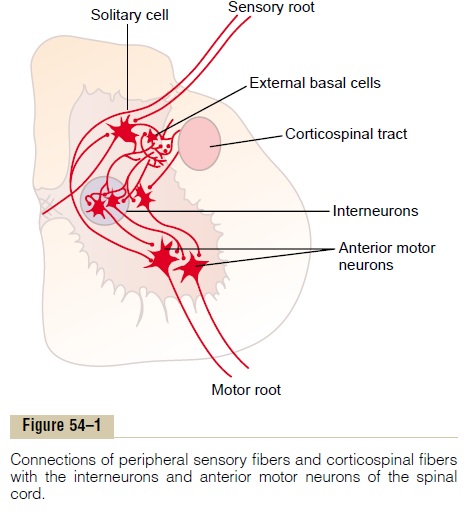 Each segment of the spinal cord (at the level of each spinal nerve) has several million neurons in its gray matter. Aside from the sensory relay neurons discussed, the other neurons are of two types: (1) anterior motor neurons and (2) interneurons.

Anterior Motor Neurons. Located in each segment of theanterior horns of the cord gray matter are several thousand neurons that are 50 to 100 per cent larger than most of the others and are called anterior motorneurons. They give rise to the nerve fibers that leavethe cord by way of the anterior roots and directly innervate the skeletal muscle fibers. The neurons are of two types, alpha motor neurons andgamma motorneurons. 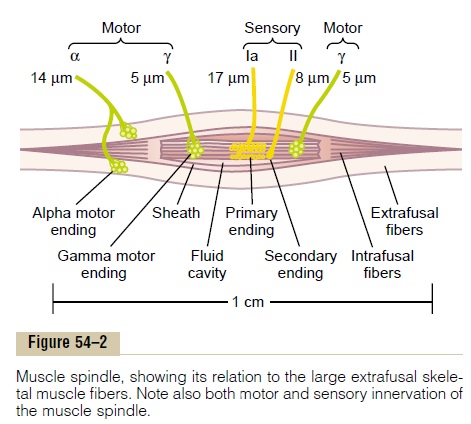 Gamma Motor Neurons. Along with the alpha motorneurons, which excite contraction of the skeletal muscle fibers, about one half as many much smaller gamma motor neurons are located in the spinal cordanterior horns. These gamma motor neurons transmit impulses through much smaller type A gamma (Ag) motor nerve fibers, averaging 5 micrometers in diam-eter, which go to small, special skeletal muscle fibers called intrafusal fibers, shown in Figure 54–2. These fibers constitute the middle of the muscle spindle,which helps control basic muscle “tone,”.

Interneurons. Interneurons are present in all areas ofthe cord gray matter—in the dorsal horns, the anterior horns, and the intermediate areas between them, as shown in Figure 54–1. These cells are about 30 times as numerous as the anterior motor neurons. They are small and highly excitable, often exhibiting sponta-neous activity and capable of firing as rapidly as 1500 times per second. They have many interconnections with one another, and many of them also synapse directly with the anterior motor neurons, as shown in Figure 54–1.

Essentially all the different types of neuronal circuits described are found in the interneuron pool of cells of the spinal cord, includingdiverging, converging, repetitive-discharge, and othertypes of circuits. We examine many applications of these different circuits in the perform-ance of specific reflex acts by the spinal cord.

Renshaw Cell Inhibitory System. Also located in the anteriorhorns of the spinal cord, in close association with the motor neurons, are a large number of small neurons called Renshaw cells. Almost immediately after the anterior motor neuron axon leaves the body of the neuron, collateral branches from the axon pass to adja-cent Renshaw cells. These are inhibitory cells that trans-mit inhibitory signals to the surrounding motor neurons. Thus, stimulation of each motor neuron tends to inhibit adjacent motor neurons, an effect called lateral inhibi-tion. This effect is important for the following majorreason: The motor system uses this lateral inhibition to focus, or sharpen, its signals in the same way that the sensory system uses the same principle—that is, to allow unabated transmission of the primary signal in the desired direction while suppressing the tendency for signals to spread laterally.

Multisegmental Connections from One Spinal Cord Level to Other Levels—Propriospinal Fibers More than half of all the nerve fibers that ascend and descend in the spinal cord are propriospinal fibers. These fibers run from one segment of the cord to another. In addition, as the sensory fibers enter the cord from the posterior cord roots, they bifurcate and branch both up and down the spinal cord; some of the branches transmit signals to only a segment or two, while others transmit signals to many segments. These ascending and descending propriospinal fibers of the cord provide pathways for the multisegmental reflexes described later, including reflexes that coordinate simultaneous movements in the forelimbs and hind limbs.