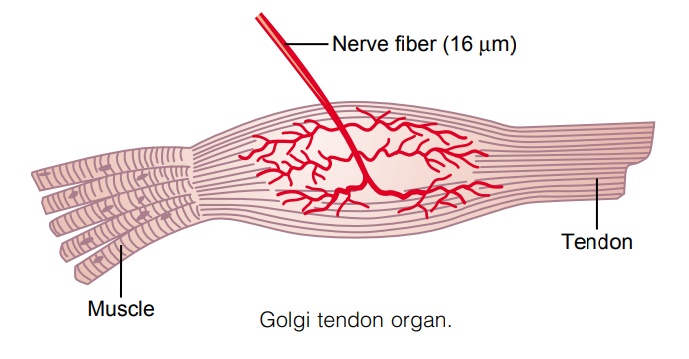 Golgi Tendon Organ Helps Control Muscle Tension. The Golgitendon organ, shown in Figure 54–7, is an encapsulated sensory receptor through which muscle tendon fibers pass. About 10 to 15 muscle fibers are usually con-nected to each Golgi tendon organ, and the organ is stimulated when this small bundle of muscle fibers is “tensed” by contracting or stretching the muscle. Thus, the major difference in excitation of the Golgi tendon organ versus the muscle spindle is that the spindledetects muscle length and changes in muscle length, whereas the tendon organ detects muscle tension as reflected by the tension in itself.

The tendon organ, like the primary receptor of the muscle spindle, has both a dynamic response and a static response, responding intensely when the muscletension suddenly increases (the dynamic response) but settling down within a fraction of a second to a lower level of steady-state firing that is almost directly proportional to the muscle tension (the static response). Thus, Golgi tendon organs provide the nervous system with instantaneous information on the degree of tension in each small segment of each muscle. 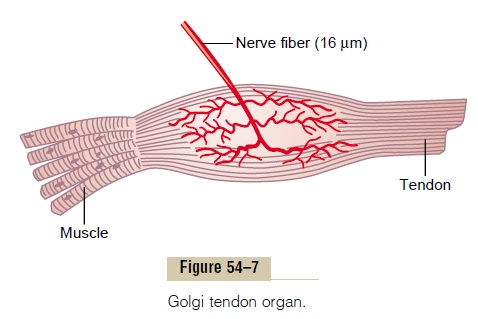 Transmission of Impulses from the Tendon Organ into the Central Nervous System. Signals from the tendon organare transmitted through large, rapidly conducting type Ib nerve fibers that average 16 micrometers in diame-ter, only slightly smaller than those from the primary endings of the muscle spindle. These fibers, like those from the primary spindle endings, transmit signals both into local areas of the cord and, after synapsing in a dorsal horn of the cord, through long fiber path-ways such as the spinocerebellar tracts into the cere-bellum and through still other tracts to the cerebral cortex. The local cord signal excites a single inhibitory interneuron that inhibits the anterior motor neuron. This local circuit directly inhibits the individual muscle without affecting adjacent muscles. The relation between signals to the brain and function of the cere-bellum and other parts of the brain for muscle control.

Inhibitory Nature of the Tendon Reflex and Its Importance

When the Golgi tendon organs of a muscle tendon are stimulated by increased tension in the connecting muscle, signals are transmitted to the spinal cord to cause reflex effects in the respective muscle. This reflex is entirely inhibitory. Thus, this reflex provides a nega-tive feedback mechanism that prevents the develop-ment of too much tension on the muscle.

When tension on the muscle and, therefore, on the tendon becomes extreme, the inhibitory effect from the tendon organ can be so great that it leads to a sudden reaction in the spinal cord that causes instan-taneous relaxation of the entire muscle. This effect is called the lengthening reaction; it is probably a pro-tective mechanism to prevent tearing of the muscle or avulsion of the tendon from its attachments to the bone. We know, for instance, that direct electrical stim-ulation of muscles in the laboratory, which cannot be opposed by this negative reflex, can occasionally cause such destructive effects.

Possible Role of the Tendon Reflex to Equalize Contractile Force Among the Muscle Fibers. Another likely functionof the Golgi tendon reflex is to equalize contractile forces of the separate muscle fibers.That is, those fibers that exert excess tension become inhibited by the reflex, whereas those that exert too little tension become more excited because of absence of reflex inhibition. This spreads the muscle load over all the fibers and prevents damage in isolated areas of a muscle where small numbers of fibers might be overloaded.