The simplest manifestation of muscle spindle function is the muscle stretch reflex.

The simplest manifestation of muscle spindle function is the muscle stretch reflex. Whenever a muscle is stretched suddenly, excitation of the spindles causes reflex contraction of the large skeletal muscle fibers of the stretched muscle and also of closely allied syner-gistic muscles. 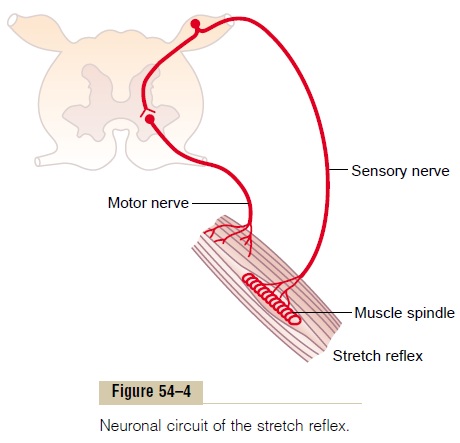 Neuronal Circuitry of the Stretch Reflex. Figure 54–4 demonstrates the basic circuit of the muscle spindle stretch reflex, showing a type Ia proprioceptor nerve fiber originating in a muscle spindle and entering a dorsal root of the spinal cord. A branch of this fiber then goes directly to the anterior horn of the cord gray matter and synapses with anterior motor neurons that send motor nerve fibers back to the same muscle from which the muscle spindle fiber originated. Thus, this is a monosynaptic pathway that allows a reflex signal to return with the shortest possible time delay back to the muscle after excitation of the spindle. Most type II fibers from the muscle spindle terminate on multiple interneurons in the cord gray matter, and these trans-mit delayed signals to the anterior motor neurons or serve other functions.

Dynamic Stretch Reflex and Static Stretch Reflexes. Thestretch reflex can be divided into two components: the dynamic stretch reflex and the static stretch reflex. The dynamic stretch reflex is elicited by the potent dynamic signal transmitted from the primary sensory endings of the muscle spindles, caused by rapid stretch or unstretch. That is, when a muscle is suddenly stretched or unstretched, a strong signal is transmitted to the spinal cord; this causes an instantaneous strong reflex contraction (or decrease in contraction) of the same muscle from which the signal originated. Thus, the reflex functions to oppose sudden changes in muscle length.

The dynamic stretch reflex is over within a fraction of a second after the muscle has been stretched (or unstretched) to its new length, but then a weaker staticstretch reflex continues for a prolonged period there-after. This reflex is elicited by the continuous static receptor signals transmitted by both primary and secondary endings.The importance of the static stretch reflex is that it causes the degree of muscle contraction to remain reasonably constant, except when the person’s nervous system specifically wills otherwise.

“Damping” Function of the Dynamic and Static Stretch Reflexes

An especially important function of the stretch reflex is its ability to prevent oscillation or jerkiness of body movements. This is adamping, or smoothing, function.

Signals from the spinal cord are often transmitted to a muscle in an unsmooth form, increasing in intensity for a few milliseconds, then decreasing in intensity, then changing to another intensity level, and so forth. When the muscle spindle apparatus is not functioning satis-factorily, the muscle contraction is jerky during the course of such a signal. This effect is demonstrated in Figure 54–5. In curve A, the muscle spindle reflex of the excited muscle is intact. Note that the contraction is relatively smooth, even though the motor nerve to the muscle is excited at a slow frequency of only 8 signals per second. Curve B illustrates the same exper-iment in an animal whose muscle spindle sensory nerves had been sectioned 3 months earlier. Note the unsmooth muscle contraction. Thus, curve A graphi-cally demonstrates the damping mechanism’s ability to smooth muscle contractions, even though the primary input signals to the muscle motor system may them-selves be jerky. This effect can also be called a signalaveraging function of the muscle spindle reflex. 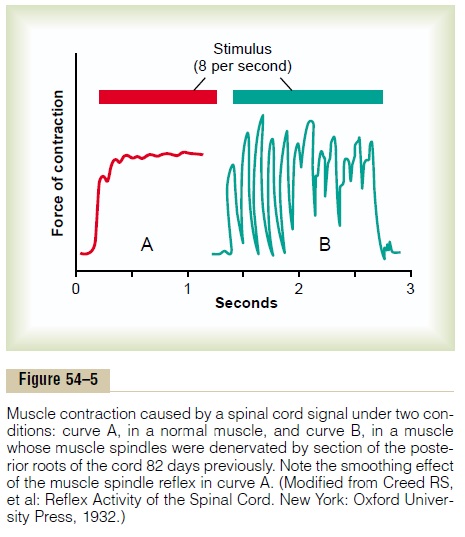