Flexor Reflex and the Withdrawal Reflexes

In the spinal or decerebrate animal, almost any type of cutaneous sensory stimulus from a limb is likely to cause the flexor muscles of the limb to contract, thereby withdrawing the limb from the stimulating object. This is called the flexor reflex.

Flexor Reflex and the Withdrawal Reflexes

In the spinal or decerebrate animal, almost any type of cutaneous sensory stimulus from a limb is likely to cause the flexor muscles of the limb to contract, thereby withdrawing the limb from the stimulating object. This is called the flexor reflex.

In its classic form, the flexor reflex is elicited most powerfully by stimulation of pain endings, such as by a pinprick, heat, or a wound, for which reason it is also called a nociceptive reflex, or simply a pain reflex. Stim-ulation of touch receptors can also elicit a weaker and less prolonged flexor reflex.

If some part of the body other than one of the limbs is painfully stimulated, that part will similarly be with-drawn from the stimulus,but the reflex may not be con- fined to flexor muscles, even though it is basically the same type of reflex. Therefore, the many patterns of these reflexes in the different areas of the body are called withdrawal reflexes.

Neuronal Mechanism of the Flexor Reflex. The left-handportion of Figure 54–8 shows the neuronal pathways for the flexor reflex. In this instance, a painful stimu-lus is applied to the hand; as a result, the flexor muscles of the upper arm become excited, thus withdrawing the hand from the painful stimulus. 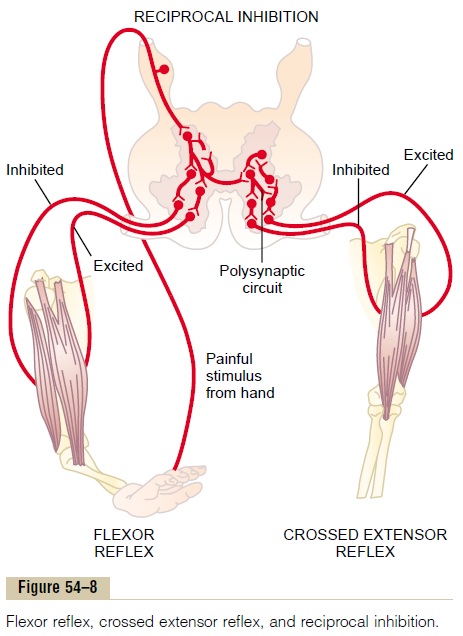 The pathways for eliciting the flexor reflex do not pass directly to the anterior motor neurons but instead pass first into the spinal cord interneuron pool of neurons and only secondarily to the motor neurons. The shortest possible circuit is a three- or four-neuron pathway; however, most of the signals of the reflex tra-verse many more neurons and involve the following basic types of circuits: (1) diverging circuits to spread the reflex to the necessary muscles for withdrawal; (2) circuits to inhibit the antagonist muscles, calledrecip-rocal inhibition circuits; and (3) circuits to cause after-discharge lasting many fractions of a second after thestimulus is over.

Figure 54–9 shows a typical myogram from a flexor muscle during a flexor reflex.Within a few milliseconds after a pain nerve begins to be stimulated, the flexor response appears. Then, in the next few seconds, the reflex begins to fatigue, which is characteristic of essen-tially all complex integrative reflexes of the spinal cord. Finally, after the stimulus is over, the contraction of the muscle returns toward the baseline, but because of afterdischarge, it takes many milliseconds for this to occur. The duration of afterdischarge depends on the intensity of the sensory stimulus that elicited the reflex; a weak tactile stimulus causes almost no after-discharge, but after a strong pain stimulus, the after-discharge may last for a second or more. 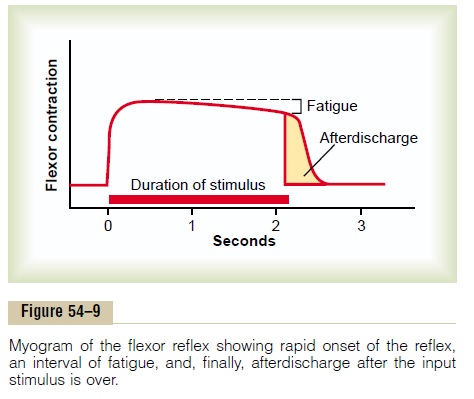 The afterdischarge that occurs in the flexor reflex almost certainly results from both types of repetitive discharge circuits. Electro-physiologic studies indicate that immediate afterdis-charge, lasting for about 6 to 8 milliseconds, results from repetitive firing of the excited interneurons themselves. Also, prolonged afterdischarge occurs after strong pain stimuli, almost certainly resulting from recurrent pathways that initiate oscillation in reverberating interneuron circuits. These, in turn, transmit impulses to the anterior motor neurons, sometimes for several seconds after the incoming sensory signal is over.

Thus, the flexor reflex is appropriately organized to withdraw a pained or otherwise irritated part of the body from a stimulus. Further, because of afterdis-charge, the reflex can hold the irritated part away from the stimulus for 0.1 to 3 seconds after the irritation is over. During this time, other reflexes and actions of the central nervous system can move the entire body away from the painful stimulus.

Pattern of Withdrawal. The pattern of withdrawal thatresults when the flexor reflex is elicited depends on which sensory nerve is stimulated. Thus, a pain stimu-lus on the inward side of the arm elicits not only contraction of the flexor muscles of the arm but also contraction of abductor muscles to pull the arm outward. In other words, the integrative centers of the cord cause those muscles to contract that can most effectively remove the pained part of the body away from the object causing the pain. Although this principle, called the principle of “local sign,” applies to any part of the body, it is especially applicable to the limbs because of their highly developed flexor reflexes.