First described in the mid-1980s by Kary Mullis, PCR is probably the most significant development in molecular biology since the advent of gene cloning.

First described in the mid-1980s by Kary Mullis, PCR is probably the most significant development in molecular biology since the advent of gene cloning. PCR allows us to amplify a specific section of a genome (for example a particular gene) millions of times from a tiny amount of starting material (theoretically a single molecule!). The impact of this powerful and highly specific process has been felt in all areas of biology and beyond. Medicine, forensic science and evolutionary studies are but three areas where PCR has opened up new possibilities over the last 15 years or so. To appre- ciate how PCR works, you will need to understand the role of the enzyme DNA polymerase in DNA replication. This is the enzyme, you’ll recall, that when provided with single-stranded DNA and a short primer, can direct the synthesis of a complementary second strand. Figure 12.14 illustrates the three steps in the PCR process: 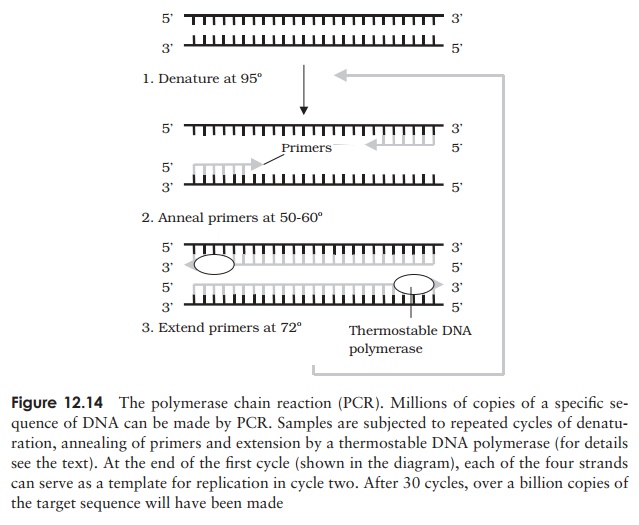 Denaturation: by heating to 95 ◦ C, the DNA is sepa rated into single strands, providing a template for the DNA polymerase.

Primer annealing: at a lower temperature (typically 50–60◦C, the exact value de-pends on the primer sequence), short single-stranded primers are allowed to attach. Primers are synthetic oligonucleotides with a sequence complementary to the regions flanking the region we wish to amplify. One primer anneals to each strand, at either side of the target sequence.

Polymerase extension: at around 72◦C, the DNA polymerase extends the primer byadding complementary nucleotides and so forms a second strand.

The net result of this process is that instead of one double-stranded molecule, we now have two. We now come to the key concept of PCR; if we raise the temperature to 95 ◦ C again to start another cycle, we will have not two, but four single-stranded templates to work on, each of which can be converted to the double-stranded form as before. After 20 such cycles we should have, in theory, over a million copies of our original molecule! Typical PCR protocols run for 30–35 cycles. All this can be achieved in just a couple of hours; the temperature cycling is carried out by a programmable microprocessor-controlled machine called a thermal cycler.

PCR has widespread applications in microbiology, as in other fields of biology, but in addition, microorganisms play a crucial role in the process itself. If you have read the above description of PCR carefully, something should have struck you as being not quite right: how can the DNA polymerase (a protein) tolerate being repeatedly heated to over 90 ◦ C, and what sort of an enzyme can work effectively at 72 ◦ C? The answer is that the DNA polymerase used in PCR comes from thermophilic bacteria such as Thermusaquaticus, a species found naturally in hot springs. The optimum temperature for Taq polymerase is 72 ◦ C, and it can tolerate being raised to values considerably higher than this for short periods. The availability of this enzyme meant that it was not necessary to add fresh enzyme after each cycle, and the whole process could be automated, a key factor in its subsequent phenomenal success.