A number of problems are associated with the expression of complex eucaryotic genes in bacterial cloning systems, some of which have just been outlined.

A number of problems are associated with the expression of complex eucaryotic genes in bacterial cloning systems, some of which have just been outlined. In order to avoid these, such genes may be expressed in eucaryotic cloning systems, the model system for which is the yeast Saccharomyces cerevisiae. This holds many attractions for the experimenter: 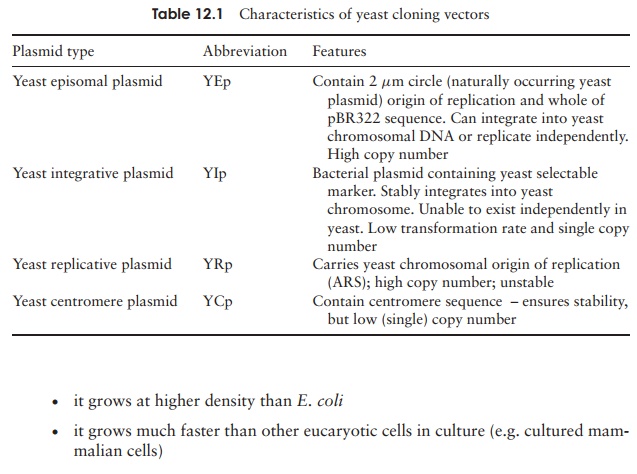 Several types of vector have been developed for use in yeasts. These are summarised in Table 12.1. The choice of which type to use will depend on the relative importance to a particular application of factors such as yield and long-term stability. Most yeast vectors are shuttle vectors, that is, vectors that can be replicated in more than one type of host cell (in this case, yeast and E. coli). Initial cloning is more easily done in E. coli, then the recombinant vector is transferred to yeast cells, which can carry out functions such as protein folding and glycosylation that are not possible in bacteria. Shuttle vectors must contain selectable markers and an origin of replication (or means of integration) for both cell types.

We saw earlier how the use of cosmid vectors extended the size of cloneable insert to around 45kb. Many eucaryotic genes, however, are bigger than this, and so cannot be cloned in a single sequence us-ing such a system. In addition, the ability to clone large DNA fragments is essential for the physical mapping of complex eucaryotic genomes such as that of humans (3 × 109bp). Yeast artificial chromosomes (YACs) have been developed to accommodate insert fragments of up to 1Mb (1000kb).

They contain key sequences from a yeast chromosome that ensure its stable replication; these include an origin of replica-tion (the autonomous replication sequence, ARS) the CEN sequence from around the centromere, and the telomeres at the end of the chromosome. When placed in S. cere-visiae cells, the presence of these sequences allows the YAC to replicate along with thenatural chromosomes.

The fragment to be cloned is inserted between the two arms of the YAC (Figure 12.12). Each arm carries a selectable marker; it is important to have two, to ensure that each construct comprises both a right and a left arm, and not two of the same. Insertional inactivation of a third selectable marker (situated around the point of insertion) allows the detection of recombinants. 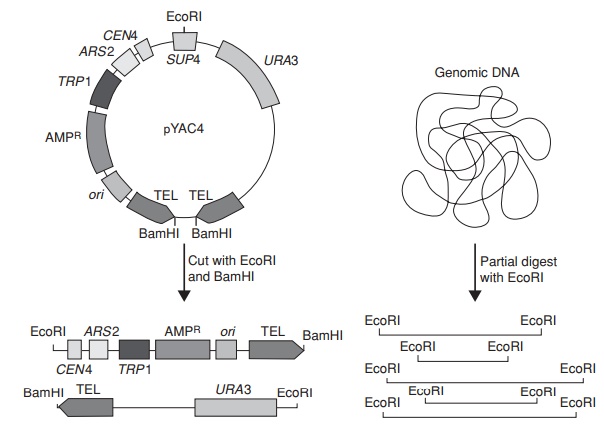 Bacterial artificial chromosomes (BACs) allow the cloning of fragments as large as300kb in length into E. coli host cells, although 100–150kb is more routinely used. They are based on the naturally occurring F plasmid of E. coli; recall from our description of bacterial conjugation  that the F plasmid can pick up considerable lengths of chromosomal DNA, when it becomes known as F’. BACs have the advantage over YACs that they are easier to manipulate, and inherently more stable.

Phage P1-derived artificial chromosomes (PACs) are another relatively recently de-veloped class of vector for use in E. coli, with a comparable capacity to that of BACs.

Viruses as vectors in eucaryotic systems

Several proteins of clinical or commercial interest are too complex to be expressed using microbial host cells, even eucaryotic ones, and are only properly produced in mammalian systems. Vectors based on animal viruses such as SV40, adenoviruses and vaccinia virus have been successfully developed for use in these. Vaccinia has been particularly valuable in the development of recombinant vaccines.

Viruses of humans such as adenoviruses and retroviruses have also been tested as vectors in the exciting new technique of gene therapy, which attempts to ameliorate the effects of genetic disorders by introducing the ‘correct’ form of the defective gene into the patient’s cells. Here it is important to ensure stable integration of the inserted DNA into the host chromosome.

A large virus that infects insects, the baculovirus, has been found to be a highly efficient vector for the large-scale expression of eucaryotic proteins in cultured in-sect cells. The rate of expression is much higher than in cultured mammalian cells, and the necessary protein folding and post-translational modifications are correctly executed.

The most important single tool for the genetic engineering of plants is the Ti plasmid. This is found naturally in the soil bacterium Agrobacterium tumefaciens, which infects plants at wound sites, and leads to a condition called crown gall disease. The impor-tant feature of this plasmid is that part of it, called the T-DNA, can integrate into the host plant’s chromosomes, and be expressed along with host genes (Figure 12.13). Ge-neticists were quick to spot the potential of the Ti plasmid, replacing tumour-forming genes with foreign genes, and having them expressed in plant tissues. The recombinant A. tumefaciens is used to infect protoplasts, which can be regenerated into a whole plant,every cell of which will contain the integrated foreign gene. The Ti plasmid system has been used in the successful transfer of genes for insect- and herbicide-resistance into economically significant crop plants. 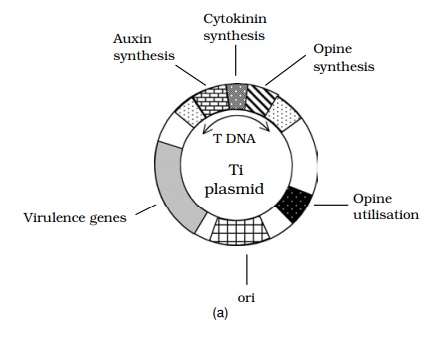 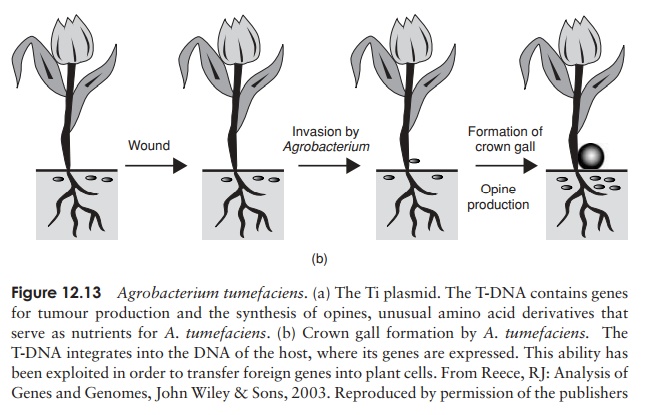 Plant viruses have very limited usefulness as vectors. Only the caulimoviruses and the geminiviruses have DNA rather than RNA as their genomic material, and a variety of problems, including instability of inserts and narrow host range, have been encountered with the use of these.

Destruction of crops by insect pests is a huge problem throughout the world, and the use of chemical insecticides is only partially successful in countering it. The drawbacks to the use of such chemicals are manifold:

·              they are often non-specific, so beneficial insects as well as harmful ones are killed

·              they are often non-biodegradable, so they can have lasting environmental ef-fects

A form of natural insecticide does exist; it is a crystalline protein produced during sporulation by Bacillus thuringiensis. This is highly toxic to insects when converted to its active form by the enzymes of the gut. This δ-endotoxin is relatively selective; different strains of B. thuringiensis produce different forms of the toxin, which are effective against the larvae of different insects. Surprising as it may seem, the use of the δ-endotoxin as an insecticide was patented a hundred years ago; however, the successof it has been limited due to a variety of practical considerations.

The development of genetic engineering techniques has meant that attention has turned in more recent times to introducing the genes for the δ-endotoxin into the crops themselves, so that they synthesise their own insecticide. This has been achieved with some success, but the problem of the insects building up resistance remains.

As a spin-off from the Human Genome Project, the genetic make-up of many microor-ganisms has been elucidated. One of these is Photorhabdus luminescens, which encodes a toxin lethal to the two species of mosquito responsible for the spread of malaria, and it is hoped that determining the sequence of the gene will lead to applications in insect control.