The most commonly used bacteriophage vectors are those based on phage Lambda (λ).

The most commonly used bacteriophage vectors are those based on phage Lambda (λ) (Figure 12.8). The genome of λ is 48.5kb in length; it was the first genome to have its entire sequence determined (1982). As drawn conventionally, the genome is linear, and contains 46 genes. At each 5 end of the double-stranded structure is a 12 base single-stranded sequence known as a cos site; these have a complementary base sequence (i.e. they are cohesive, or ‘sticky’ ends). They can join together to form a double-stranded, circular λ molecule, a conformation that is essential for insertion and integration into the host genome.

The naturally occurring phage is unsuitable as a vector, because being relatively large, it contains multiple copies of recognition sites for a number of REs. By using genetic manipulation techniques, however, unwanted sites can be removed, allowing the DNA to be ‘opened up’ at a single location, and fragments of foreign DNA with complementary sticky ends to be ligated.

A further limitation that must be overcome is that in this form, phage λ can only accommodate about another 3kb of DNA. This is because if the genome exceeds 52kb, it cannot be packaged properly into the protein head to produce viable phage particles. The arrangement of genes on the phage λ genome offers a solution to this problem. It is known that genes encoding specific functions are clustered together, with genes necessary for the lytic replication cycle being found at the ends of the map as it is conventionally drawn (Figure 12.8). It is possible, therefore, to remove much of the central part of the λ genome without affecting its ability to infect and lyse its bacterial host.

Insertion vectors have had some of this non-essential material removed, reducing theirgenome size to around 42kb, and thus allowing them to carry an insert of up to 10kb. A single-copy restriction site is opened up, and a fragment with complementary sticky ends inserted with the aid of DNA ligase. Vectors such as λZAPII have a multiple cloning site or polylinker, positioned so that it falls within the lacZ gene. This allows insertional inactivation with blue/white selection to be used for the detection of recombinants as described above for pUC plasmids. 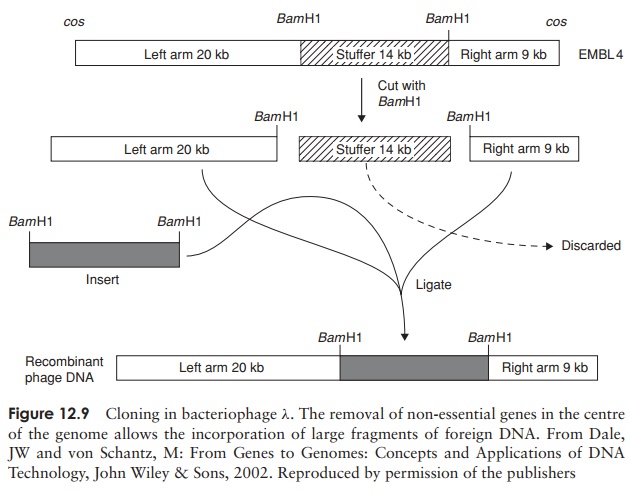 Replacement vectors (Figure 12.9) are able to accommodate larger inserts, becauseinstead of a single copy of a particular RE site, they have two, one situated either side of a disposable central section known as the ‘stuffer’ fragment. This can be removed by digestion with the appropriate RE and replaced by insert DNA. The vector λEMBL3, which can accommodate inserts of between 9 and 23kb, has two polylinker sequences containing sites for SalI, BamHI and EcoRI flanking the stuffer fragment, allowing a variety of restriction fragments to be inserted.

Recombinants in replacement vector systems can be detected by a method that ex-ploits the limitations in the phage’s ability to package DNA. Just as too big a genome cannot be packaged , neither can one that is too small (<37kb); consequently, constructs lacking an insert will not result in the formation of plaques.

Another naturally occurring bacteriophage of E. coli that has been adapted for use as a cloning vector is phage M13. This is a single-stranded phage that for part of its replication cycle inside the host cell exists as a double-stranded replicative form, which can be isolated and manipulated like a plasmid. Systems based on M13 have proved popular as a means of obtaining DNA in a single-stranded form for applications such as DNA sequencing using the dideoxy (Sanger) method. M13 vectors contain a multiple cloning site situated within the lacZ gene, allowing blue/white selection of recombinants. The cloning capacity is generally limited to fragments of less than 1.5kb, but hybrid M13/plasmid vectors (phagemids) have been developed that are able to take inserts of as much as 10kb.

As we have seen, a large collection of cloned DNA fragments is called a DNA library. If the original donor DNA comprised the entire genome of an organism, then the collection of clones, which between them contain an entire donor genome, is known as a genomiclibrary. We could create a library of the entire E. coli genome (total size 4.8×106bp)for example, by having just over 700 clones with an average insert size of 20kb. For a more complex genome, however, we would either need to have very many more clones, or to increase the average fragment size.

For this reason, further types of cloning vectors have been developed, to allow the cloning of larger fragments. Cosmids are entirely man-made creations, and have no naturally occurring counterpart. They incorporate beneficial features of both plasmids and phage vectors, and may be capable of accommodating insert fragments of more than 45kb. Cosmids are essentially plasmids that contain the cos sites from λ phage, with the plasmid supplying the necessary origin of replication, restriction sites and selectable marker. As we’ve seen, λ DNA will be packaged into phage heads if the cos sites are 37–52kb apart; however the only parts of the DNA recognised by the packaging enzymes are the cos sites, so any DNA can be used to fill the intervening sequence.

The recombinant DNA is packaged into phage particles by a process called in vitro packaging, and introduced into the host E. coli. Lacking phage genes, cosmids do not lead to lysis of the host cells and plaque production, but are instead replicated as if they were plasmids. Growth of host cells on a selective medium allows the detection of transformants, i.e. those that have taken up the cosmid. There is no need to select for recombinants, because non-recombinants are too small to be packaged into the phage heads.