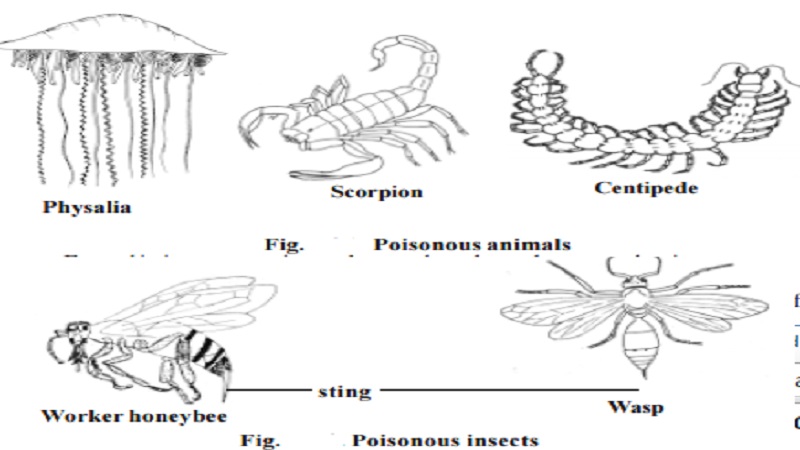 These are marine coelenterates. They are notorious for the painful sting they can inflict on unsuspecting swimmers who accidently brush against them. They attack using stinging cells on their trailing tentacles. Their powerful stings cause painful local inflammation and can even be fatal.

In scorpion the sting is attached to the posterior part of the last segment. It consists of bulbous base and a sharp curved barb that injects the venom. The venom is produced by a pair of oval glands. The scorpion raises the posterior abdomen over the body making it curved forward. A stabbing motion is used in stinging.

The venom of most scorpions is sufficiently toxic to kill a vertibrate. The venom of the scorpion Androctonus is equivalent in toxicity to cobra venom.

The neurotoxic venom of scorpions is very painful and may cause paralysis of the respiratory muscles or cardiac failure in fatal cases. Anti venoms are available for these species.

Centipedes are distributed throughout the world. They live in soil and humus and beneath stones. The largest centipede is the tropical AmericanScolopendra gigantea which may reach 26 cm in length. They have a large pair of poison claws sometimes called maxillipeds. Each claw bears a terminal pointed fang. The venom although painful is not sufficiently toxic to be lethal to man even to small children. However S. gigantea has been known to cause human death.

In worker honey bee (undeveloped females) the poisonous sting is situated at the hind end of the body. It is a pointed structure provided with minute hooks or barbs at its free end. On stinging the tip of sting gets detached. Hence a bee can sting only once.

Unlike the bee the wasp is able to withdraw its sting from the wound. Hence it can sting again. In wasp the sting is a modified ovipositor and once it has penetrated the skin of the victim poison is injected as in a hypodermic syringe. The wasp's poison is a histamine.

The sting by honey bees and wasps lead to pain and inflammation.

More than 700 species of fishes have poison glands. Venom in fishes is of two kinds. One kind of venom is produced by specialized glands which may occur in various parts of the body. In the second, the flesh itself may secrete some toxic substance and the fish becomes poisonous and inedible.

There are several poisonous cartilaginous fishes. The poison glands are usually associated with a spine or sting as in the case of sting ray. In the sting ray(Trygon), the poison glands lie along a lateral groove on each side of the spine on its tail. The spine causes pain and numbness in the flesh of victim.

The large Barracuda of Cuba and other tropical islands have poisonous flesh, which when eaten cause pain in joints and extremities, nausea, vomiting and general trembling.

The Puffer fish, (Tetrodon) is considered to be world's most dangerous fish. Its ovaries, intestine, kidneys, skin and eyes contain a neurotoxin calledTetradoxin. This toxin has no antidote. It is several times deadlier than cyanide. In a dilute form, tetradoxin is used as a pain killer for victims of neuralgia, arthritis and rheumatism 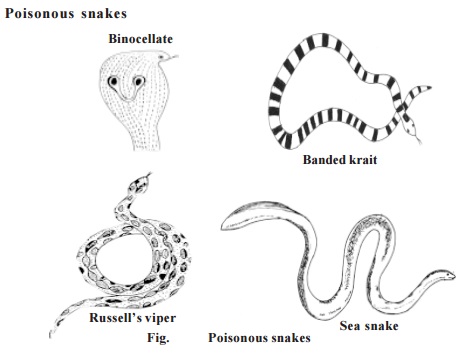