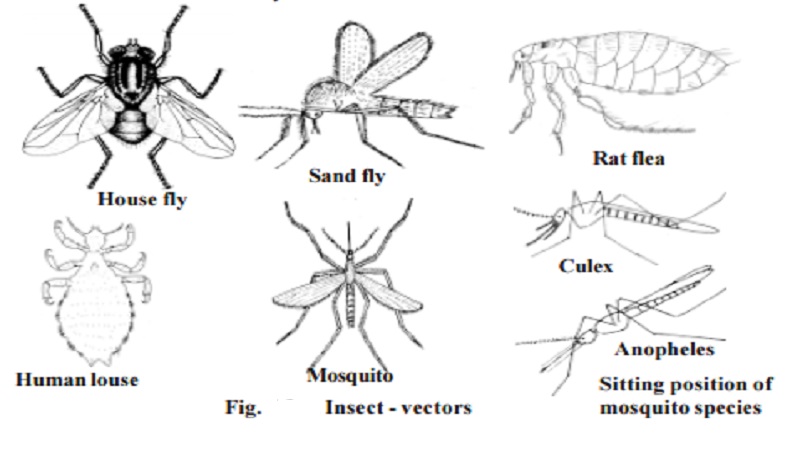 House flies are cosmopolitan in distribution. They are closely associ-ated with humans and thrive best where people are careless in the disposal of wastes. Adult flies are non-parastic.

They feed on all kinds of decaying and decomposing matter. It is an important mechanical vector in the transmission of diseases like typhoid (Salmonellatyphosa - a bactericum), dysentery (Entamoeba histolytica) and cholera (Vibrio sps.) The housefly cause diseases through food contaminations.

Control : Housefly control is normlly done in 3 different ways, namely sanitary, mechanical and chemical methods. Populations of houseflies can be controlled by proper disposal of manure, garbage, sewage, food waste, human excreta and other organic materials. Mechanical practices such as screening, using of traps or sticky paper or baits can be valuable in excluding houseflies. Insecticides may be used against larvae. Spraying with 2% malathion 1% chlordane or lindane, 0.5% tremephos are effective.

These flies are 4 mm long. Only the female possess piercing-sucking mouth parts and are haematophagous. The males are non parasitic, feeding on moisture. They are small slender insects with hairy bodies. Through biting this fly transmits the disease called kala-azar. The causative oraganisms isLeish-mania, a parasitic protozoan. During the day time the flies remain hiding. At night they come out to feed. The sand fly attacks during night times. The insect sucks the parasite from an infected person, along with blood. In side the body of the fly, the parasite undergoes changes. When an infected fly bites man, the parasites pass into the blood and fresh infection is effected. The parasites mostly concentrate in the capillaries of spleen, liver and bone mar-row. The disease is characterized by the symptoms like anaemia and emacia-tion.

Spraying of 5 % DDT / BHC easily kills the flies. The pyrethrum ointment used on exposed part of the body works as a repellent.

The insect parasite, Xenopsylla cheopis is commonly known as the Asiatic rat flea. Both male and female fleas take in the bacillus pasteurella pestis from infected rats during feeding. This rat - flea is responsible for the transmission of plague from man to man, or from rat to man. When this bacterium is introduced into the skin, the lymph glands become inflammed. This is known as bubonic plague. Frequently, the bacilli become established in the victims blood. The condition is then referred to as septicemic plague. If the victim's lungs become involved, it is referred to as pneumonic Plague

When the rat flea sucks the blood of man or a rat infected with plague, the bacilli enter into its stomach and grow there into large numbers. The flea thus heavily laden with the bacilli, may bite a healthy man and introduce the bacilli into the wound and cause infection. The bacilli are deposited by the flea on the skin along with the faeces. The bite of the flea causes scratchings and the bacilli are introduced into the blood when the skin is scratched.

Destruction of rats and other rodents is an effective method. Dusting of 1 to 2 % chloradane, or 2 % Y - BHC is very much effective in the elimination of fleas on the body of pet animals. Application of 5% DDT is recommended for spraying at the time of the spread of plague in all the areas.

Louse is a blood sucking ectoparasite of man. It is cosmopolitan in distribution .

Mosquitoes are cosmopolitan in distribution. They are nocturnal in habit and are found in abundance in damp, marshy lands near stagnant water. Only female mosquitoes are adapted to suck the blood of human beings and func-tion as carrier of viral, protozoan and nematode diseases.

Culex mosquitoes serve as the vectors for filariasis or elephantia-sis. This disease is caused by the nematode parasite, Wuchereria bancrofti. It is commonly known as filarial worm. It is found in the lymphatic vessels and lymph glands of man. The female worms give birth to living embryos known asmicrofilariae. The microfilariae normally circulate at night(10 to 2 am) in the peripheral blood. At that time they are ingested by the mosquito along with blood, the mosquito is not just a mechanical carrier of the parasite. Developmental changes take place in the body of the parasite. When the infected mosquito next bites another person, the larvae penetrate the superficial skin to find their way into the lymphatic vessels, and attain sexual maturity. In severe infection the adults cause blocking of lymphatic system which results in the enlargement of legs, arms, scrotum, and mammary glands. It is known aselephantiasis.

Another type of mosquito, Aedes transmits yellow fever through a