The study of the nature, causative agent, development and control of plant diseases is called plant pathology.

History proves us that plant diseases had caused severe famine in the early centuries as a result of which millions of people died and was forced to migrate out of their country. Plantations were wiped out and agro industries failed and shortage of food resulted due to microbial attack on plants.

Example: In 1840, late blight disease of potato has caused severe famine in Ireland

The various diseases caused on plants by micro organisms can be broadly grouped into the following kinds.

Most of the diseases of plants are caused by fungi. They exhaust all the nutrients from the plants and exhibit a wide variety of symptoms on leaves, stem and inflorescence. The common symptoms are given below.

It is a plant disease caused by the rust fungus of the class Uredinomycetes. Example: Puccinia sp. The leaves have characteristic spots or pustules which are rust colored, yellow or brown that bear spores of the infecting fungi.

This plant disease is caused by a fungus of the order Ustilaginales. The plant parts contain black, powdery masses of spores that appear as sooty smudges.

It is due to the deficiency of water in the foliage, which results in the death of shoots and large branches. Several fungi like Fusarium, Verticillium cause wilt by plugging up the xylem and phloem vessels of the plant.

This disease is characterised by the formation of downy growth (covered with soft, fine hairs) on the undersurface of the leaves with a corresponding yellowish patch on the top of the leaves. The causative fungus belongs to the order Perenosporales

The other fungal diseases of plants include Powdery mildews, Rots, Damping off, Leaf spots (Figure 11.13) and Blights. 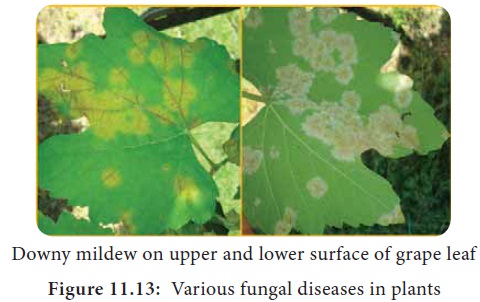 Plants that are infected with bacterial leaf spot will develop dark-colored, water-soaked spots that are accompanied by encasing yellowing halos.

Continuous rain and moisture will cause the coalescence of the spots. Severely infected leaves will defoliate prematurely. Bacterial leaf spot is a common nuisance of citrus (Figure 11.14) and stone fruit trees and vegetables, as well as other indoor and outdoor foliage plants.

Crown gall is a root and stem disease that is most commonly found on woody plants. Infected plants will develop smooth, light-colored galls on its roots and stems. These formations inhibit the plant’s ability to transport nutrients and water throughout the plant.

This results in loss of vigor of plant which is also accompanied by growth stunt and dieback of branch and twigs (Figure 11.15) Crown gall disease is a soil-borne bacterial disease caused by Agrobacterium sp. 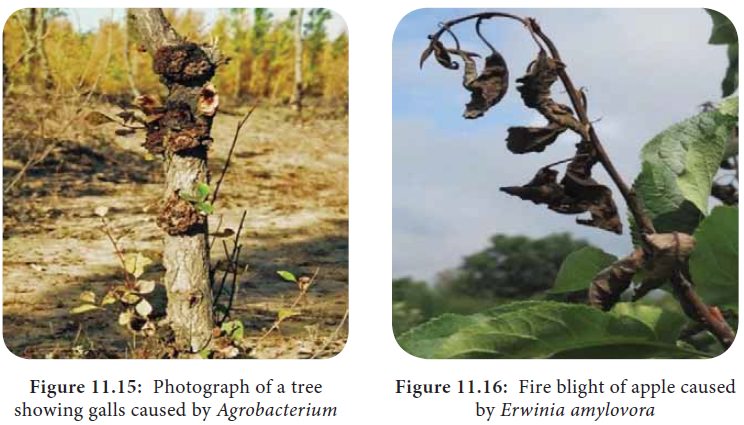 Fire blight is a destructive bacterial disease that is especially threatening to rosebushes and pome fruit trees like apple and pear. Trees and plants that are infected with fire blight will display tan-colored, bacterial ooze near the points of infection (Figure 11.16) The infected areas become necrotic, turn black, wilt and become deformed.

Viruses are obligate parasites and require a wound to gain entrance to a plant cell. In nature, they depend primarily on biological agents such as nematodes, insects and man for their dissemination. Once duplication starts, the virus is translocated from cell to cell through the plasmodesmata and to distant plant parts by the phloem. Some viral diseases are very host specific, and others are general, over many hosts. Symptoms include stunting, mosaic, ring spots, color breaks, and distortion. 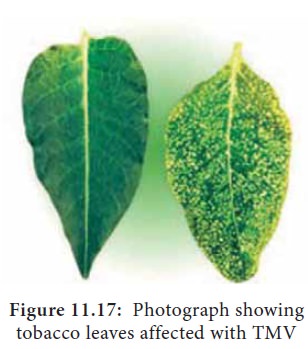 Late blight is the disease that triggered the Irish potato famine of the 1840s which resulted in the death and starvation of 1 million people. It also was the first plant disease for which a microorganism was proved to be the causal agent, leading to the birth of plant pathology as a science (Figure 11.18) 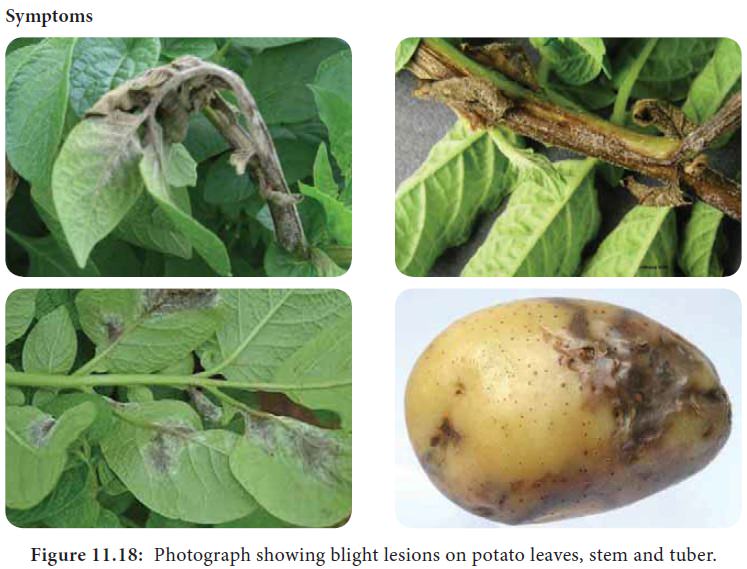 Phytophthora infestans is a member of the oomycetes, a group of organisms sometimes referred to as the “water molds”. During asexual reproduction, Phytophthora infestans produces sporangia on sporangiophores. In cool, wet conditions, zoospores will form and emerge from the sporangia after about two hours. In warmer conditions, sporangia may function as a single spore and germinate directly. Zoospores are biflagellate (have two flagella) with one tinsel flagellum directed anteriorly and one whiplash flagellum directed posteriorly. 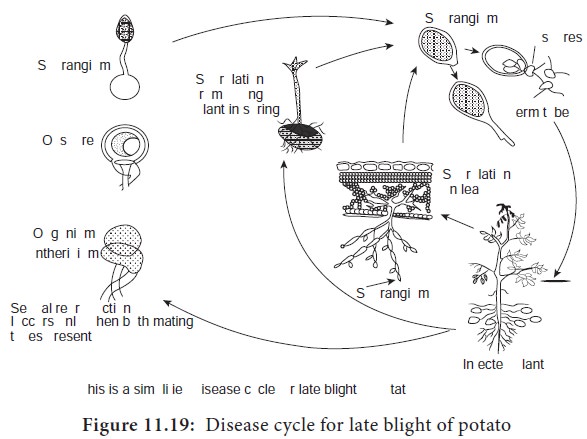 After swimming on the surface of the host plant surface, zoospores encyst and infect the plant. During sexual reproduction, mating between opposite mating types happen. A nucleus from the antheridium (Male) enters the oogonium (female). Following karyogamy (the fusion of two nuclei), a thick-walled, diploid oospore is formed. From oospore, sporangium develops and the life cycle (Figure 11.19) continues.

Lesions on stems and leaves

Late blight of potato is identified by black/ brown lesions on leaves and stems that may be small at first and appear water soaked or have chlorotic borders, but soon expand rapidly and become necrotic. In humid conditions, Phytophthora infestans produces sporangia and sporangiophores on the surface of infected tissue.

This sporulation results in a visible white growth at the leading edge of lesions on abaxial (lower) surfaces of leaves. As many lesions accumulate, the entire plant can be destroyed in only a few days after the first lesions are observed

Tuber infection symptoms are a darker brown sometimes purplish area on the tuber surface. The internal rot is a reddish brown granular rot which can remain close to the surface or progress to the centre of the tuber. Rot development is irregular and sometimes threadlike through the tuber flesh. Late blight causes skin damage which allows opportunistic bacteria to invade and cause soft rotting.

Temperature and moisture are the most important environmental factors affecting late blight development. Sporangia are formed on the lower leaf surfaces and infected stems when relative humidity is < 90%. Sporulation can occur from 3-26°C, but the optimum range is 18-22°C. Sporangia germinate directly via a germ tube at 21-26°C.

Fungicide applications are an important means of late blight management, particularly in humid areas. They must be applied before plants are exposed to spores. Copper hydroxide (2g/lit), chlorothalonil (2g/lit) and mancozeb (2.5g/lit) fungicides are the standard protectants used for control. they are usually applied every seven to ten days for best protection.