Biofertilizers can act as a renewable supplement to chemical fertilizers and organic manures.

Nitrogen fixation by leguminous and other crops is reported to be 44 million metric tons per annum. The appropriate strain of Rhizobium can increase the crop yield up to 10-35%. Also, residual N is beneficial for the next crops grown in the same field.

It has been estimated that 40-250 kg N / hectare(ha) / year is fixed by different legume crops by the microbial activities of Rhizobium.

1.     They reduce the need for chemical fertilizers.

2.     They provide the plant with certain vitamins, plant growth promoting substances and increase the vigour of the plant.

Based on the nutrients that they provide, biofertilizers are of the following types

Rhizobium – legume symbiosis is a well studied plant microbe interaction and Rhizobium is the most extensively used nitrogenous biofertilizer in India. 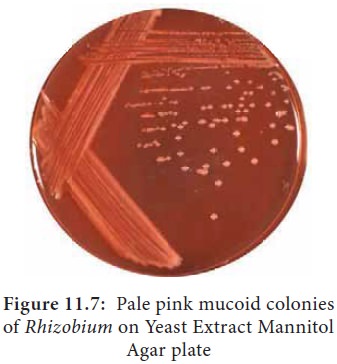 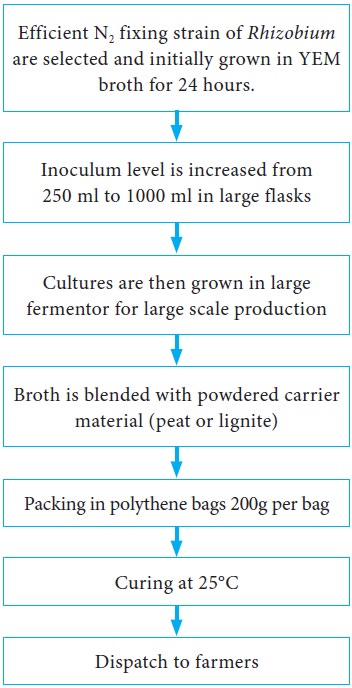 Method of application of Rhizobium to plants

Carrier based Rhizobium inoculants are mixed with water to form slurry to which the seeds of plants are added (Figure 11.8). The coated seeds are dried in shade and used for sowing.

For mass cultivation and inoculant preparation, the cultures are grown in Pikovaskaya broth for 7-18 days and mixed in suitable carrier like peat or lignite. After curing for a week, the inoculants are packed and made ready for use in a similar manner as Rhizobium inoculants.

Mycorrhiza means fungus root. It describes the symbiotic association between plant and fungus. Vesicular Arbuscular Mycorrhiza (VAM) is an endomycorrhiza which is used as a fungal biofertilizer. They mobilize the soluble phosphates in the root zone of plants and satisfy the phosphorus nutrition of plants.

VAM is an example of endomycorrhiza meaning, the storage organelles of phosphates like vesicles and arbuscles are seen intracellularly. Vesicle is a globose structure and arbuscle is a tree like branching structure present in the root cortical cells (Figure 11.9). VAM fungi are naturally most prevalent in angiosperms. gymnosperms, pteridophytes and bryophytes. 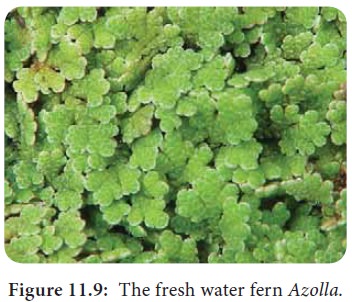 Root based inoculum is used for preparing VAM biofertilizer (Figure 11.10). The selected spores of VAM fungi are allowed to infect plants like onion, sorghum and other grasses. After 3-4 months, the roots along with the soil are macerated or pelleted with an inert material and packed in polythene pouches which can be used as biofertilizer. 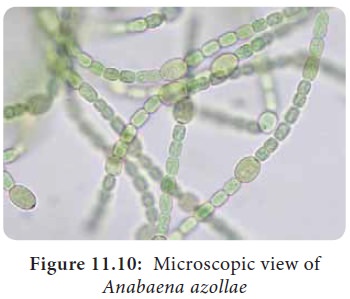 Most of the filamentous forms have specialized large, thick walled cells called heterocysts which are sites of nitrogen fixation.

Example: Nostoc, Anabaena is examples for filamentous BGA. Gleocapsa is an example of unicellular BGA. Some of the filamentous forms do not possess heterocysts but still fix atmospheric nitrogen. Since they need standing water for their growth, BGA can effectively colonize paddy fields and enrich the soil with nitrogen.

Applying BGA to paddy fields can reduce the amount of chemical nitrogenous fertilizer applied for the growth of paddy crop. Therefore cultivation of BGA in large quantities is necessary. Mass cultivation of BGA has the following steps.

BGA can be isolated from soil or paddy fields. Appropriate dilutions from serially diluted algal sample are inoculated in the liquid flasks containing algal media like BG-11 or Pringsheim’s media. After several weeks of incubation at 28°C, the individual colonies are picked up, identified and stored. This can be used as starter culture for mass cultivation. Mass culture can be done in 2 ways.

The dried algal flakes around 10kg/ha can be applied in paddy fields after transplantation. 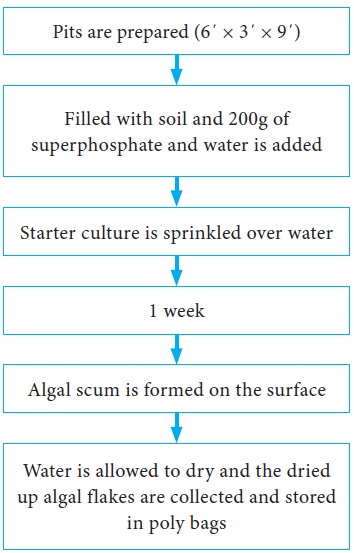 Azolla is a floating freshwater fern. The plant has a branched stem, deeply bilobed leaves which are arranged alternately on the stem and each leaf has a dorsal and ventral lobe (Figure 11.9). The dorsal lobe houses the cyanobacterial symbiont Anabaena azollae (Figure 11.10). The fern and the cyanobacteria exhibit symbiotic relationship in which Anabaena provides the fern with fixed nitrogen and fern provides niche for the cyanobacteria free from competition from other microorganisms.

Azolla can be used as a nitrogenous biofertilizer for paddy crop. When applied into the paddy fields, Azolla provides nitrogen nutrition to standing rice crop and can reduce the need for synthetic fertilizers. 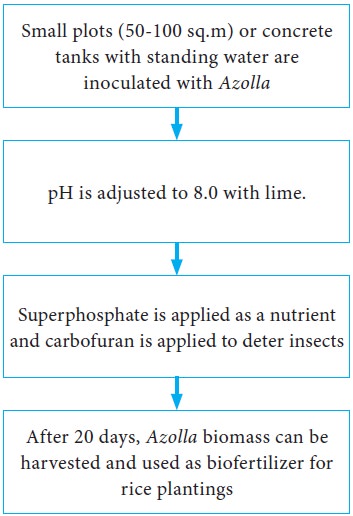 Method of application of Azolla in rice fields

Azolla is grown on the flooded rice fields prior to planting for 2-3weeks. Then water is drained and Azolla is incorporated into the soil followed by rice transplantation within a week’s time.