Pests are insects that damage crop plants and stored products.

Pests are insects that damage crop plants and stored products. They feed on leaves and roots or suck the sap of the plants causing severe crop losses. Chemical pesticides sprayed on plants can be detrimental to ecosystem if the usage is prolonged and pests may develop resistance to the pesticides.

The term biopesticides refers to compounds that are used to manage agricultural pests by means of specific biological effects. It refers to products containing biocontrol agents like natural substances such as plants, certain minerals, animals, micro organisms including their genes or metabolites.

They are an important part of Integrated Pest Management (IPM) strategy in controlling the pest.

They are less toxic to humans and environment and they do not leave harmful residues.

They affect only the target pest.

They cause long term suppression of pest populations since they persist in the environment.

Microbial biopesticides are of three kinds

Bacteria like Bacillus thuringiensis, Bacillus papillae and Bacillus lentimorbus have the potential to kill certain insect pests and are entomopathogenic.

Mode of action of Bt

The Bt cells sprayed on the leaves have to be ingested by the larval forms of the insects in order to exert its action. This is because the Bt toxin gets activated in the insect gut at a specific pH. 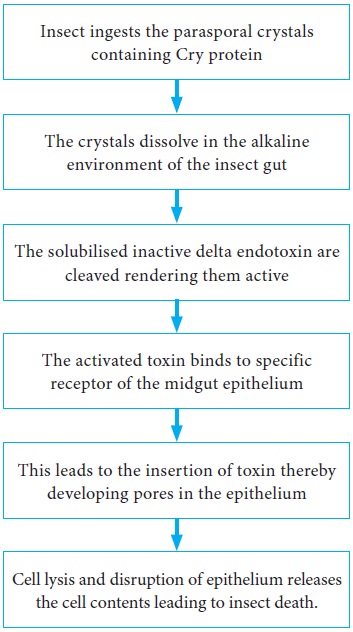 These entomopathogenic fungi attack insects and cause diseases in insect body which lead to insect death. Two prominent fungi used as mycopesticide are

Mode of action of Beauveria bassiana 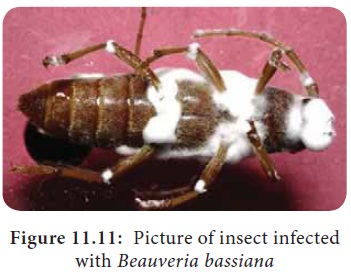 This fungus invades the haemocoel of insects through spores. Once the spores attach to the cuticle, it germinates and the hyphae penetrates the insect cuticle (cuticle is the outer membrane of insects) Penetration is aided by formation of appresorium and penetration peg. The fungi secrete chitinases, lipases and proteases which can dissolve the cuticle. The hyphae enter the haemolymph and proliferate and colonise the entire insect and release blastospores. Insect death occurs due to nutrient depletion of the haemolymph or by toxaemia by secretion of toxic metabolites.

Viral insecticides are pathogens that attack insects and other arthropods. Viral pesticides are used to control Lepidopteran larvae like Helicoverpa, Spodoptera sp on Cotton, Corn, Sorghum, tomatoes. Baculoviruses are the commonly used viral biopesticide. They are extremely small and are composed of double stranded DNA. The genus Baculoviruses contains 3 subgroups.

Mode of action of NPV

The virus enters the insect body via ingestion by insects and infects the midgut cells by membrane fusion. The NPV uncoat within the nucleus of cells and pass through the intestinal epithelium (Figure 11.12) and establish a systemic infection of the haemocoel. 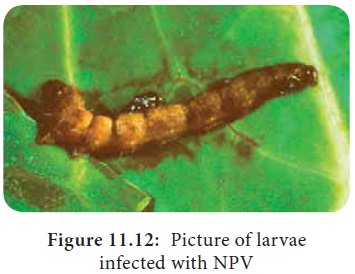 ·        Decomposition or softening of larvae

NPV are mass produced in laboratory using suitable larval hosts. The fifth stage larvae are fed with food infected with

NPV. After 4-5 days, the dead larvae are collected and macerated. The liquid is centrifuged and the pellet containing the viruses is suspended in sterile distilled water. This viral suspension can be used for spraying in the fields.