Biogeochemical cycling is defined as the movement and conversions of materials by biochemical activities throughout air, water and soil.

Most macro elemental components of living organisms like Carbon, Nitrogen, Sulphur, Oxygen, Phosphorus and Hydrogen are cycled most intensely and other elements like Copper, Chromium, Iron, Zinc, Nickel are cycled less intensely.

Carbon is a macro element present in all living cells. In microorganisms, they are present in all macromolecules like cell wall, cytoplasmic membrane, proteins and nucleic acids.

Reservoirs are the storage places of nutrients that are present in nature. They store nutrients in large amounts for longer periods of time. 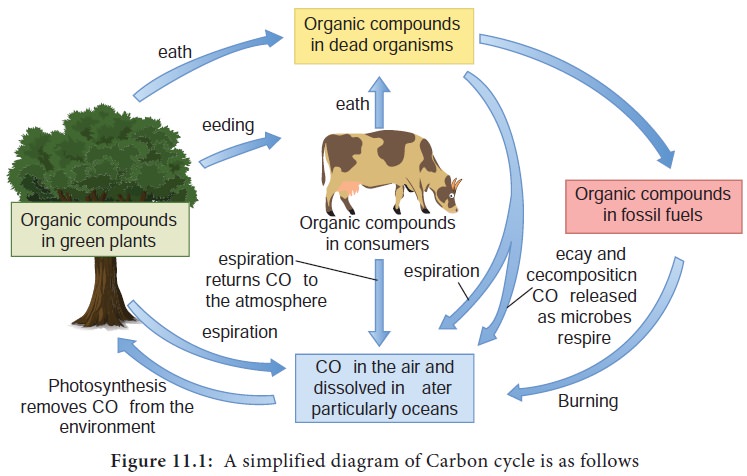 The different stages or processes involved in carbon cycle are

It is a process where atmospheric CO2 is converted to organic carbon (CH2O)n. This is carried out by higher plants, photosynthetic bacteria, cyanobacteria and algae using radiant energy from the sun. This can be explained by the equation,

where (CH2O)n represents the organic form of carbon (Example: Carbohydrates) which gets incorporated into the photosynthetic organisms. This organic carbon serves as food for herbivores and in turn for carnivores.

The organic matter fixed as a result of photosynthesis is eventually degraded by microorganisms to CO2 during processes like respiration and decomposition. When aerobic and anaerobic organisms respire, CO2 is released into the atmosphere. Much of the CO2 is released when dead organisms decompose in the soil predominantly by the activities of soil microorganisms. Burning of fossil fuels also release CO2 into the atmosphere.

It is an anaerobic process where CO2 gets converted to CH4 (methane) by strict anaerobes like methanogens (Example: Methanobacterium). Methanogens are a group of Archaebacteria found in anaerobic environments like swamps, marshes, rumen of ruminants, paddy fields and gut of termites.

Methane is converted back to carbondioxide by a process called Methylotrophy.

The element Nitrogen (N) is a key constituent in microbial cell. Nitrogen is needed for the formation of proteins, amino acids, nucleotides and is present in a number of oxidation states inside the cell. Nitrogen is cycled between atmosphere, organic compounds in living things, soil and sediments.

The processes that are involved in Nitrogen cycle are

Nitrogen is present as N2 (N

N) in air (78% N2). The triple bonded state of nitrogen makes it very stable and nitrogen in its gaseous state cannot be assimilated by plants or animals for their metabolism. Only few groups of prokaryotes are capable of breaking the triple bond and use it for building up their proteins and aminoacids. The process of reduction of gaseous nitrogen (N2) to ammonia (NH4) is called Nitrogen fixation. This process is carried out by a group of prokaryotes called diazotrophs.

Cyanobacteria, Rhizobium and Frankia are some of the examples of diazotrophs that can fix atmospheric nitrogen. The fixed ammonia gets incorporated into proteins and amino acids, thus building up organic nitrogen. 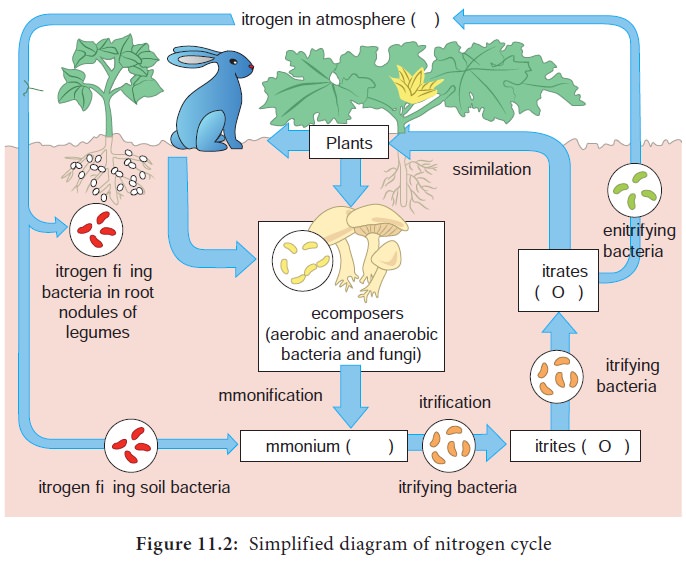 Bacteria like Bacillus, Clostridium, Pseudomonas and fungi like Aspergillus, Mucor and Penicillium are few examples of micro organisms that can ammonify.

The oxidation of ammonia (NH3) to nitrate (NO3) is called nitrification. It is carried out by nitrifying bacteria. It is a two step process where ammonia is first converted to nitrite (NO2) and then to nitrate (NO3).

The above given oxidation reaction is the first step that produces nitrite. This reaction provides energy and is carried out by Nitrosomonas and Nitrosococcus.

In the second step, the nitrite is oxidized to nitrate

This reaction is carried out by Nitrobacter.

Nitrates are readily assimilated by plants but are very water soluble and rapidly leached from soil.

The reduction of NO3- from soils by denitrifying bacteria to gaseous nitrogen is called denitrification. In this process, carried out by bacteria like Pseudomonas,

One of the most significant biological process taking places on the Earth is biological nitrogen fixation (BNF). This fixation of atmospheric nitrogen carried out by few prokaryotes is cost efficient because industrial production of ammonia by Haber’s Bosch process is very expensive.

Organisms carry out BNF in a free living state in soil or they can establish symbiotic association with other plants or micro organisms and fix N2.

Organisms capable of BNF are 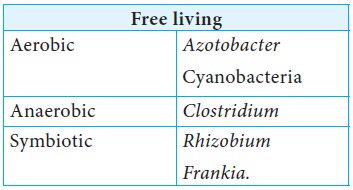 BNF by Rhizobium in leguminous plants

Leguminous plants belong to the family Leguminaceae and bear seeds in pods. Example: Black gram, Green peas, Soyabean, Subabul. The bacteria belonging to the genus Rhizobium which can exist in free living state in soil but can enter into symbiosis with legume plants and carry out nitrogen fixation.

It consists of the following steps

N to NH4 in root nodules

Rhizobium recognises and attaches to the root hairs of legume plant. It invades the root hairs and secretion of certain nod factors result in root hair curling typically called Shepherd’s crook symptom which leads to the formation of infection thread. Infection thread is a cellulosic tube like structure through which Rhizobium moves into the cortex from root hairs. 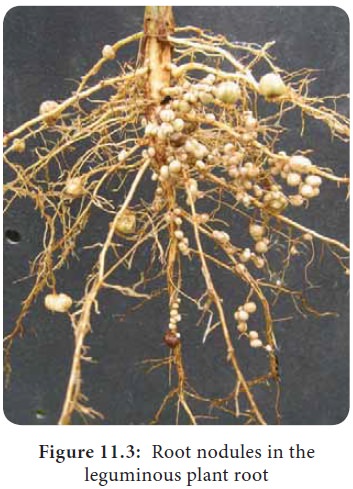 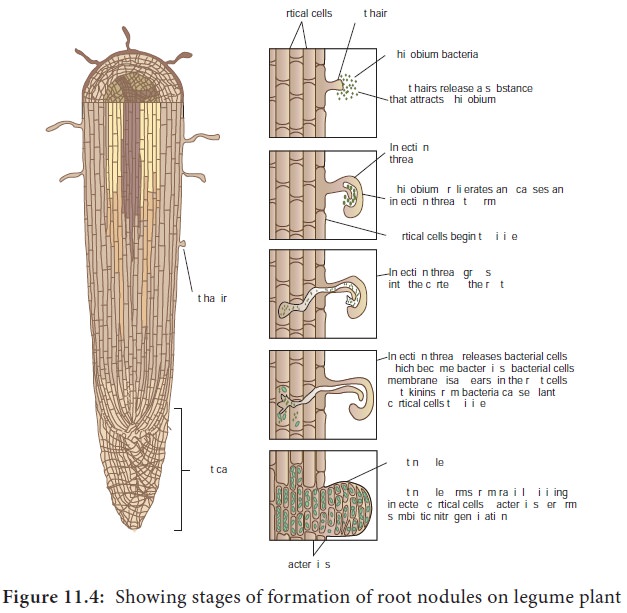 3. Reduction of N≡N to ammonia in root nodules

This biochemical process is catalysed by an enzyme called Nitrogenase present in bacteroids and happens under diminished O2 levels. The O2 levels in the nodules are controlled by an oxygen binding protein called leghemoglobin. This is a red, iron containing protein which can keep the nodule environment free of oxygen.

N thus reducing it to NH4. This reduction needs 16 ATP, ferredoxin and cytochromes.

3. Dissolved phosphates in soils and waters 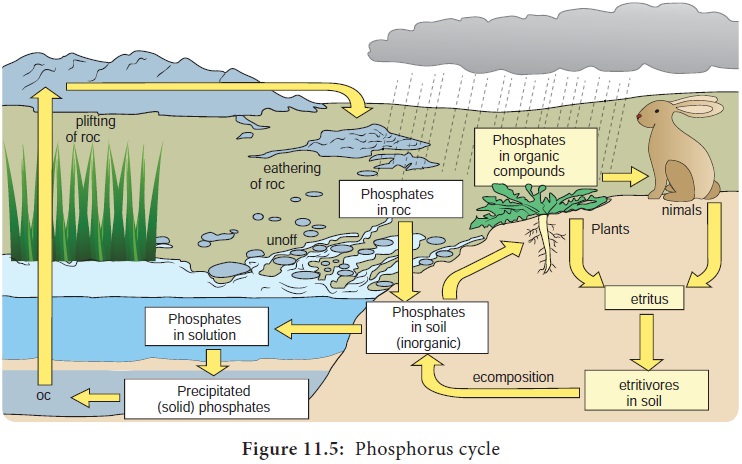 Most of phosphates occur in combination with Calcium, Iron, Magnesium and Aluminium (inorganic P) and thus are insoluble and unavailable to plants and micro organisms. Some micro organisms solubilize those insoluble phosphates by producing organic acids. Example: Thiobacillus, Bacillus thus enabling the plants to utilize it.

Plants and micro organisms can readily assimilate soluble forms of inorganic phosphates like H2PO4-, HPO4-2 and HPO4-3 and incorporate them as organic forms of phosphates like ATP, nucleic acids.

Sulphur is present in sulphur containing aminoacids. The sulphur cycle involves oxidation – reduction reaction between Sulphate (SO4), Elemental S and H2S and hence there is change in the valence states of sulphur from -2 to +6.

The basic steps involved in sulphur cycle are

If light is available, H2S can be used as electron donor to carry out photosynthesis under anoxic conditions by phototrophic sulphur bacteria like Chromatium and Chlorobium.

When sulphate is present in habitats, different groups of microorganisms are capable of carrying out sulphate reduction.

Beijerinck described the use of sulphate (SO42-) as a terminal electron acceptor during anaerobic respiration to form sulphide (H2S). This process is called Dissimilatory Sulphate Reduction(DSR). The anerobic bacteria capable of carrying out DSR are Desulfovibrio, Desulfococcus, Desulfotomaculum (Figure 11.6) This reaction by sulphate reducers requires organic carbon sources like pyruvate or lactate. H2S accumulated in such habitats by the action of sulphate reducers is toxic to aerobic organisms.

The reduction of sulphate to H2S, for building up aminoacids and proteins 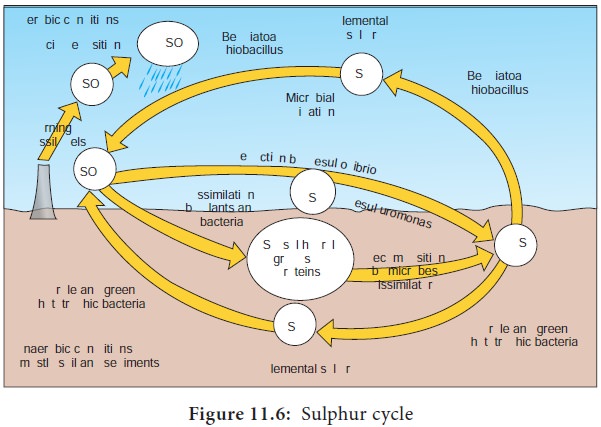 is called as assimilatory sulphate reduction. The H2S thus produced is immediately incorporated into organic compounds.

The dissimilative sulphur reducing bacteria can reduce elemental sulphur to hydrogen sulphide. Example: Desulfuromonas, an obligate anaerobe. Under aerobic conditions, organisms like Pseudomonas, Proteus and Salmonella are also capable of performing this reaction.

Organic sulphur compounds like dimethyl sulphide can be used as carbon and energy source for many microorganisms.

It is a process where organic sulphur compounds are used up by microorganisms for energy to produce H2S.