Microbial Infections of the Human Body

Medical microbiology is the branch of microbiology which deals with prevention, diagnosis and treatment of infectious diseases.

Microbial Infections of the Human Body

Medical microbiology is the branch of microbiology which deals with prevention, diagnosis and treatment of infectious diseases. There are four kinds of microorganisms that cause infectious diseases. They are bacteria, fungi, parasites and viruses. Any disease that spreads from one host to another, either directly or indirectly is said to be a communicable disease. Chicken pox, measles, genital herpes, typhoid fever and tuberculosis are examples of such diseases, that are easily spread from one person to another.

A non communicable disease does not spread from one host to another. For example, Clostridium tetani, a soil inhabitant, produces Tetanus when it is introduced into a wound or an abrasion. Tetanus is thus an infectious disease, but not communicable.

There are various ways in which microorganisms enters into the host are explained below.

Infection may be acquired by contact which may be direct or indirect. Sexually transmitted diseases such as syphilis and gonorrhea spread by direct contact. Indirect contact may be through the agency of inanimate objects such as clothing, pencils or toys which may be contaminated by a pathogen from one person to another. Pencils shared by school children may act as fomites in the transmission of diphtheria, and face towels in trachoma.

Respiratory infections such as influenza and tuberculosis are transmitted by inhalation of the pathogen in droplet and droplet nuclei that are shed by the patients during sneezing, speaking or coughing. Common cold virus, Adenovirus is some of the virus producing respiratory infections.

Intestinal infections are generally acquired by the ingestion of food or drinks contaminated by pathogens. Infection transmitted by ingestion may be waterborne (cholera), food borne (typhoid) or fecal-oral route (dysentery).

Pathogens, in some instances, may be inoculated directly into the tissues of the host. Tetanus spores implanted in the depth of wounds, rabies virus deposited subcutaneously by dog bites, inoculation through unsterile syringes and surgical equipments are examples that enter through direct inoculation.

Some pathogens are able to cross the placental barrier and infect the fetus in uterus. Bacteria like Treponema pallidum, viruses like Rubella, Cytomegalovirus parasite like Toxoplasma gondi are some of the organisms that enter through placenta and cause disease in the newborn.

Infections may be classified in various ways. Initial infection with a parasite in a host is called a primary infection. Subsequent infections by the same parasite in the host are termed reinfections. When a new parasite sets up an infection in a host whose resistance is lowered by a preexisting infectious disease, this is termed secondary infection.

When in a patient already suffering from a disease, a new infection is setup from another host or other external sources it is termed cross infection. Cross infections occurring in hospitals are called nosocomial infections. Iatrogenic infection refers to physician induced infections resulting from investigative, therapeutic or other procedures.

Depending on whether the source of infection is from the host’s own body or from external sources, infections are classified as endogenous or exogenous, respectively.

Endogenous infections are acquired from the host himself from the normal flora of the body.

Microorganisms are present in certain areas of the body in all human beings. They are called normal flora. The common areas are Nose, Mouth, Teeth, Throat, Intestine, Urethra, Vagina and Skin (Figure 12.1). 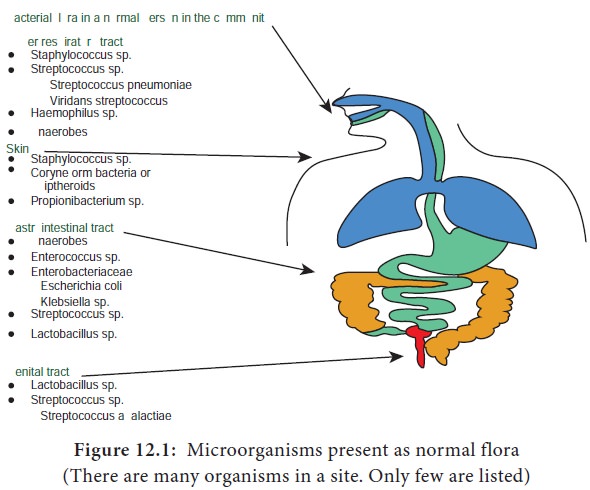 1.     When the skin is breached normal flora enters the tissues.

2.     When the urethral organisms ascend, they cause urinary tract infection

3.     When a patient is treated with antibiotics, normal flora is eliminated and replaced by potential pathogens

4.     When the intestine is perforated, normal flora enter the previously sterile body parts

5.     Similarly when the pH of the vagina increases potential pathogens occupy the space.

Animals: Many pathogens are able to infect both human beings and animals. Infectious disease transmitted from animals to human beings are called zoonoses. Zoonotic diseases may be bacterial (Example: plague from rats) or viral (Example: rabies from dogs).

Transmission may be mechanical or biological. Mechanical transmission is the passive transport of the pathogens on the insects feet or other body parts. Example: Houseflies can transfer the pathogens of Typhoid fever and Bacillary dysentery (shigellosis) from feces of infected people to food. Such vectors are called mechanical vectors.

Soil: Some pathogens are able to survive in the soil for very long periods. Spores of tetatus bacilli may remain viable in the soil for several decades and serve as the source of infection.

Water: Water may act as the source of infection due to contamination with pathogenic microorganisms. Example: Cholera causing Vibrio cholerae.

Food: Contaminated food materials may act as source of infection. The presence of pathogens in food may be due to external contamination. Example: Food contaminated by Staphylococcus.

Infectious diseases may be localised or generalised.

Generalised infections: An infection that has spread to several regions or areas in the body of the host. This involves the spread of the infecting agent from the site of entry through tissue spaces or channels, along the lymphatics or through the bloodstream.

Circulation of bacteria in the blood is known as Bacteremia. Septicemia is the condition where bacteria circulate and multiply in the blood, form toxic products and cause high fever. Pyemia is a condition where pyogenic bacteria produce septicemia with multiple abscesses in the internal organs such as the spleen, liver and kidney.

Occurrence of a disease

Depending on the spread of infectious disease in the community, they may be classified into different types.

·        Endemic diseases are those which are constantly present in a particular area. Typhoid fever is endemic in most parts of India.

·        Epidemic disease is one that spreads rapidly, involving many persons in an area at the same time. Example: Epidemic of Dengue in 2017.

·        A pandemic is an epidemic that spreads through many areas of the world involving very large numbers of persons within a short period. Example: H1N1 Influenza outbreak in 2009. Ebola outbreak in 2014-2016 in West Africa was the largest in history and first ever epidemic, affecting multiple countries.

·        If a particular disease occurs only occasionally, it is called a sporadic disease. The most commonly occurring sporadic diseases in India are Diphtheria and Hepatitis A and E.

Severity or duration of a disease

·        Another useful way of defining the scope of a disease is in terms of its severity or duration.

·        An acute disease is one that develops rapidly but lasts for a short time.

·        A chronic disease develops more slowly, and the body’s reactions may be less severe, but the disease is likely to be continual or recurrent for long periods.

·        A disease that is intermediate between acute and chronic is described as a subacute disease.

Interaction between Microbes and Host

Pathogen is a microorganism which causes disease.

Pathogenecity is the ability of a pathogen to produce disease.

Virulence is the degree of pathogenecity of a microorganism. Virulence is not generally attributable to a single property but depends on several parameters related to the organism, the host and their interaction.

Microorganisms first enter the body, survive, multiply and elaborate many factors and produce the disease.

Adhesion: The initial event in the pathogenesis of many infections is the attachment of the bacteria to body surfaces. Adhesions may occur as organized structures, such as fimbriae and pili. Adhesions serve as virulence factors.

Capsule: It is an envelope or slime layer surrounding the cell wall of certain microorganisms. Capsule plays important roles in immune evasion as it inhibit’s phagocytosis, as well as protecting the bacteria while outside the host.

Toxins: Toxins are specific chemical products of microbes, plants and some animals that are poisonous to other organisms. Toxigenicty is the power to produce toxins.

A toxin molecule secreted by a living bacterial cell into the infected tissue is an exotoxin. A toxin that is not actively secreted but is shed from the outer membrane is an endotoxin. the difference between exotoxin and endotoxin were given in Table 12.1.

Some enzymes like proteases, DNAases and phospholipases are produced and they help in destruction of the cell structure and to hydrolyse host tissues.

Microorganisms evade the host immune responses by changing their surface antigens. Antigenic drift and antigenic shift are common in influenza viruses. The distinction between the commensal and the organism associated with disease.

Specific diagnosis is important for better patient care, use of appropriate antibiotics and to initiate appropriate preventive measures. The diagnostic cycle begins when the clinician takes a microbiological sample and ends when a clinician receives the laboratory report and uses the information to manage the condition (Figure 12.3). 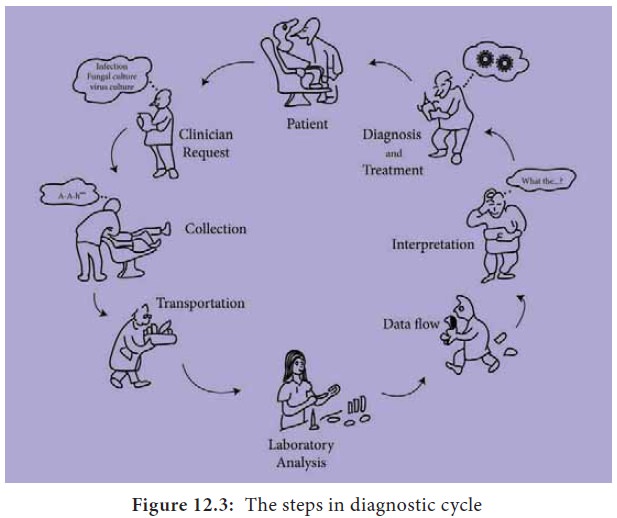 The steps in diagnostic cycle are

2.     Collection and transport of appropriate specimens.

4.     Interpretation of microbiology report and use of the information.

Specimen Collection and transport: It is important to collect the specimen appropriately and protect it from contamination. Transport media are used that are compatible with the organism believed to be present in the clinical sample. Quality of patient specimens and their transport to the laboratory is important.

Direct   diagnosis:   It   is    the demonstration  of  the  presence  of  an infectious agent, antigen or nucleic acids

Indirect diagnosis: It is the demonstration of presence of antibodies to a particular infectious agent, cytopathic effects, haemagglutination, inclusion bodies and neutralization.

The different approaches for diagnosis or identification of infectious agents are shown in Figure 12.4. 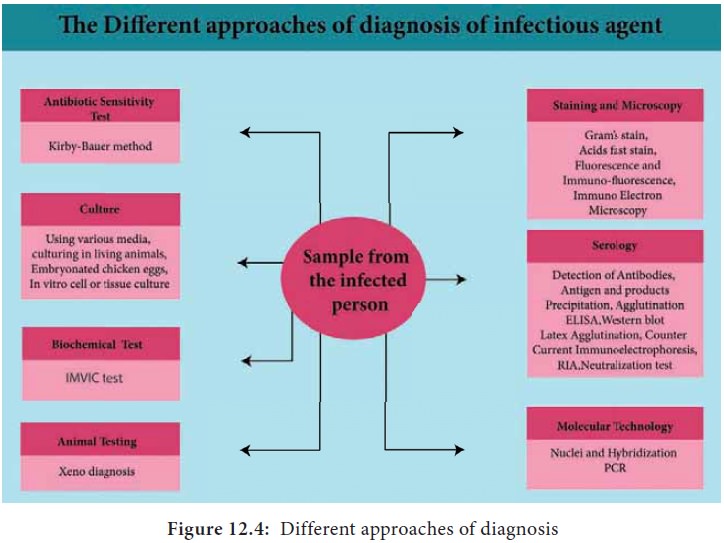