Human systems function by the energy produced from the digested food molecules.

Human systems function by the energy produced from the digested food molecules. The food is swallowed through mouth and digested in the gastro intestinal tract. The food we consumed should be free of contaminations. The contaminated food causes gastrointestinal infections.

Through contaminated food and water the pathogens are ingested and they enter the GIT. In the small intestine they initiate an infection. Many times the pathogens that cause intestinal infections multiply in the GIT and produce their pathogenic effect in the intestine itself. Example: Shigellosis, Cholera. 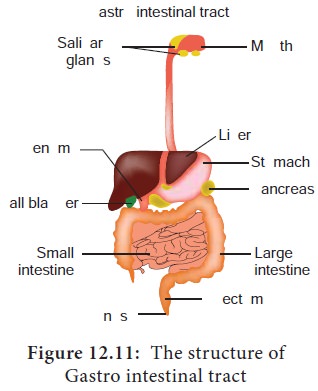 Difference between infection and intoxication

Microbial diseases of digestive system are typically transmitted by a fecal oral route. Most such diseases result from the ingestion of food or water contaminated with pathogenic microorganisms or their toxins. These pathogens usually enter the food or water supply after being shed in the feces of people or animals infected with them.

After ingestion of pathogenic microorganisms, localization and multiplication of organisms takes place in the GIT and is called infection. Microorganisms may penetrate into intestinal mucosa and grow there or they may penetrate to other organs. Gastroenteritis is usually classified as either infection or intoxication. Food borne diseases can arise from either infection or intoxication. In both cases, bacterial toxins are typically responsible for producing disease signs and symptoms. In a food infection the microbial agent ingested colonise in the gut and then produces toxins that damage host cells.

In case of food intoxication the toxins produced by bacteria in the food are ingested. Infection and intoxication differ in their onset of symptoms. Infections are characterized by a delay in the appearance of gastrointestinal disturbance until the pathogen increases in number or affects invaded tissue. Infection is correlated with onset of fever, one of the basic body’s general responses to an infective organism. In case of intoxication, the symptoms are characterized by sudden appearance of gastrointestinal disturbances like cramping, nausea, vomiting or diarrhoea.

The stomach and gastrointestinal tract are not sterile and are colonized by the organisms that perform functions beneficial to the host, including the manufacture of essential vitamins. Escherichia coli found in the intestine help the body to produce vitamin K and Bifodobacteria can synthesizes vitamins such as vitamin B12, folate, and riboflavin. Humans cannot produce these vitamins. The normal flora changes according to the diet, age, cultural conditions and the use of antibiotics (Table 12.4).

High  acidic nature of stomach  acts as  natural defensive mechanism. It eliminates potentially pathogenic microorganisms. Many bacteria like Eschericha coli and Salmonella survive in the acidic environment of stomach for an hour. Nitric oxide produced in the stomach by oxidation of ingested nitrates combines with the stomach acids and kills the bacteria in less than an hour. Lysozyme of saliva has antimicrobial properties. Small intestine contains important antimicrobial defences like specialized granule filled cells called paneth cells. These cells are able to phagocytose bacteria and also produce antibacterial proteins called defensins. 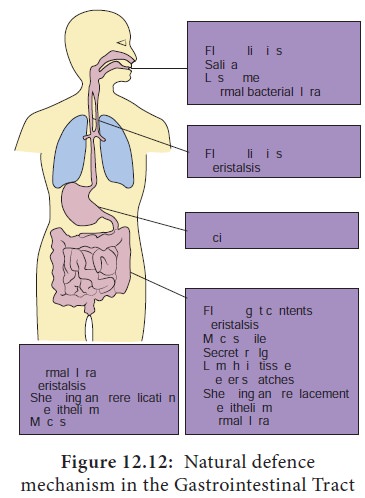 Gastroenteritis: Inflammation of lining of stomach and intestine. It is a syndrome characterized by nausea, vomiting, diarrhea, abdominal discomfort.

Diarrhea: Condition in which feces, are discharged from the bowels frequently and in a liquid form.

Dysentery: Inflammatory disorder of the GIT associated with pus and blood in feces.

Gastritis: Inflammation of the stomach lining that results in swelling.

Enteritis: Inflammation of the intestinal mucosa

Colitis: Inflammation of the colon

Hepatitis: Inflammation of the liver

Enterocolitis: Inflamation involving the mucosa of both large and small intestine.

Peritonitis: Inflammation of peritoneum (it is the serous membrane that forms the lining of the abdominal cavity). Infections of digestive system are listed in Table 12.5. 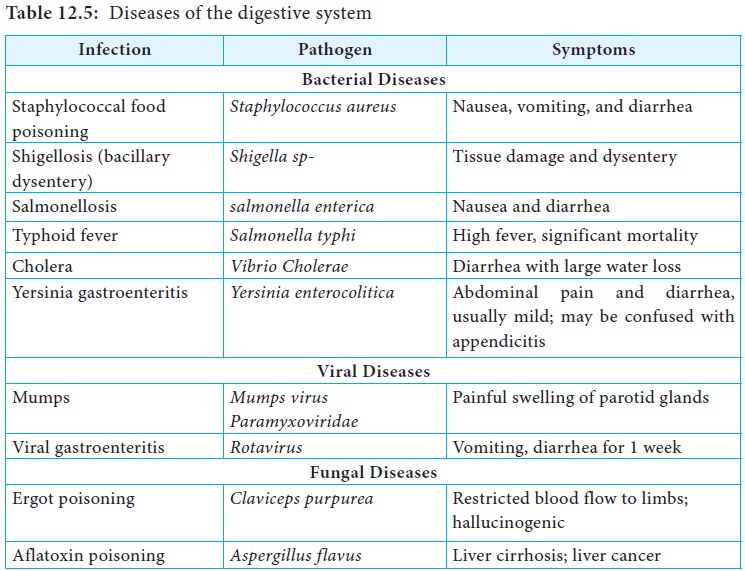