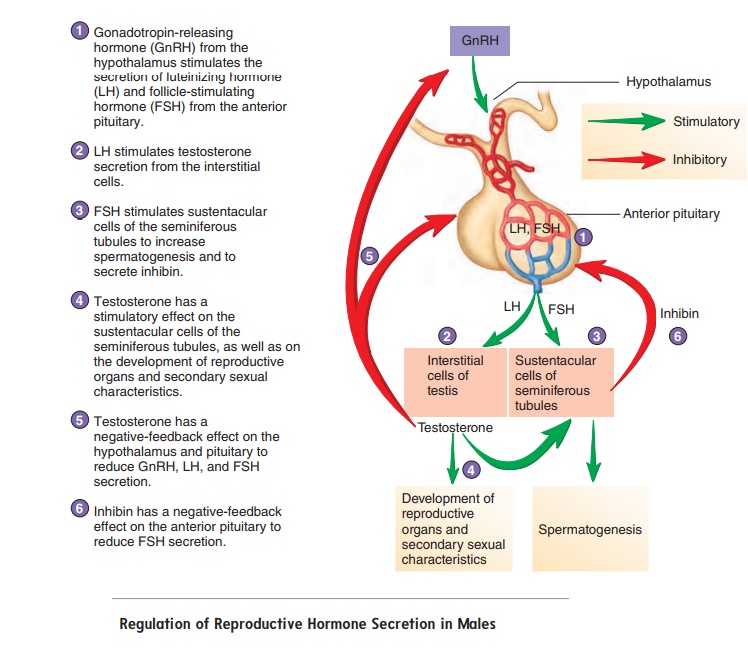 A. List the hormones that influence the male reproductive system, and describe their functions. B. Describe the changes that occur in males during puberty. C.Explain the events that occur during the male sexual act.

The male reproductive system depends on both hormonal and neu-ral mechanisms to function normally. Hormones control the devel-opment of reproductive structures, the development of secondary sexual characteristics, spermatogenesis, and some aspects of sexual behavior. The mature neural mechanisms are primarily involved in controlling the sexual act and in the expression of sexual behavior. 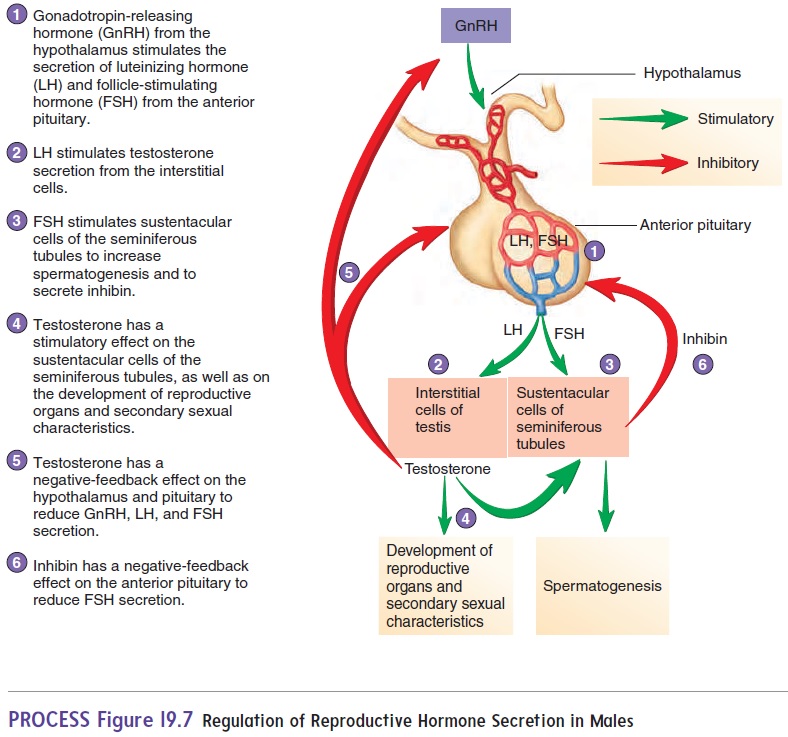 LH binds to the interstitial cells in the testes and causes them to secrete testosterone. FSH binds primarily to sustentacular cells in the seminiferous tubules and promotes sperm cell development. It also increases the secretion of a hormone called inhibin (in-hib′ in; to inhibit). 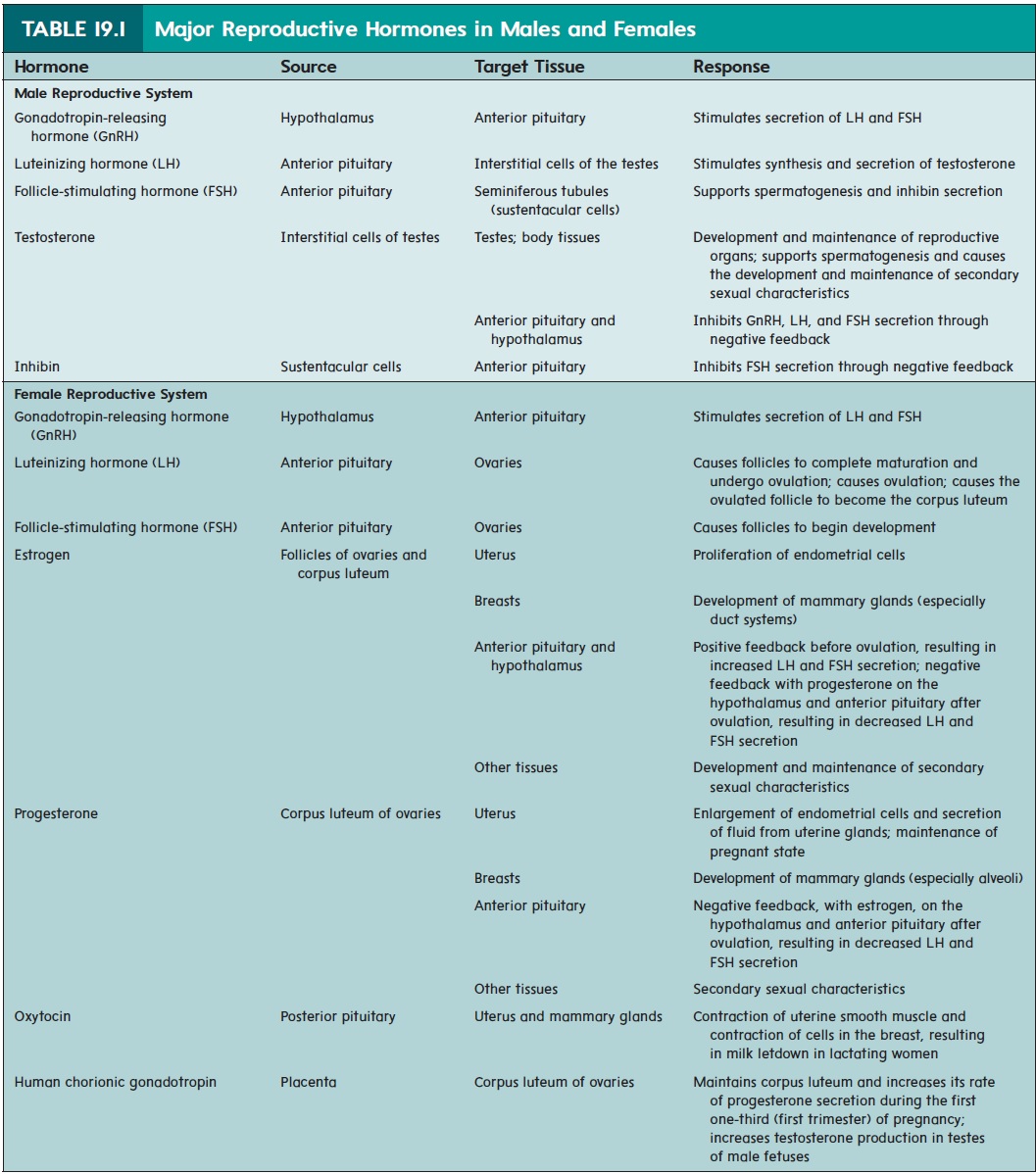 For GnRH to stimulate LH and FSH release, the pituitary gland must be exposed to a series of brief increases and decreases in GnRH. If GnRH is maintained at a high level in the blood for days or weeks, the anterior pituitary cells become insensitive to it. GnRH can be produced synthetically and is useful in treating some people who are infertile. Synthetic GnRH must be administered in small amounts in frequent pulses or surges. GnRH can also inhibit reproduction because long-term administration of GnRH can sufficiently reduce LH and FSH levels to prevent sperm cell production in males or ovulation in females.

Puberty (p̄u′ber-t̄e) is the sequence of events by which a child istransformed into a young adult. The reproductive system matures and assumes its adult functions, and the structural differences between adult males and females become more apparent.

In boys, puberty commonly begins between the ages of 12 and 14 and is largely completed by age 18. Before puberty, small amounts of testosterone, secreted by the testes and the adrenal cortex, inhibit GnRH, LH, and FSH secretion. Beginning just before puberty and continuing throughout puberty, developmental changes in the hypothalamus cause the hypothalamus and the anterior pituitary gland to become much less sensitive to the inhibitory effect of tes-tosterone, and the rate of GnRH, LH, and FSH secretion increases. Consequently, elevated FSH levels promote spermatogenesis, and elevated LH levels cause the interstitial cells to secrete larger amounts of testosterone. Testosterone still has a negative-feedback effect on the hypothalamus and anterior pituitary gland, but GnRH, LH, and FSH secretion occurs at substantially higher levels.

Testosterone (tes′tos′t̆e-r̄on) is the major male hormone secretedby the testes. Testosterone influences reproductive organs and nonreproductive structures (table 19.2). During puberty, testoster-one causes the enlargement and differentiation of the male genitals and the reproductive duct system. It is necessary for spermatogen-esis and for the development of male secondary sexual character-istics. The secondary sexual characteristics are those structural and behavioral changes, other than in the reproductive organs, that develop at puberty and distinguish males from females.

Testosterone is required for normal sexual behavior. Testosterone enters certain cells within the brain, especially within the hypo-thalamus, and influences their functions. The blood levels of testosterone remain relatively constant throughout the lifetime of a male, from puberty until about 40 years of age. Thereafter, the levels slowly decline to approximately 20% of this value by 80 years of age, causing a slow decrease in sex drive and fertility.

The male sex act is a complex series of reflexes that result in erection of the penis, secretion of mucus into the urethra, emission, and ejaculation. Emission (̄e -mish′ ̆u n) is the movement of sperm cells, mucus, prostatic secretions, and seminal vesicle secretions into the prostatic, membranous, and spongy urethra. Ejaculation (̄e -jak′ ̄u -l̄a ′ sh̆u n) is the forceful expulsion of the secretions that have accumulated in the urethra to the exterior.

Sensations, normally interpreted as pleasurable, occur during the male sex act and result in an intense sensation called an orgasm (̄o r′ gazm), or climax. In males, orgasm is closely associated with ejaculation, although they are separate functions and do not always occur simultaneously. A phase called resolution occurs after ejaculation. During resolution, the penis becomes flaccid, an overall feeling of satisfaction exists, and the male is unable to achieve erection and a second ejaculation.

Psychological stimuli, such as sight, sound, odor, or thoughts, have a major effect on male sexual reflexes. Ejaculation while sleep-ing (nocturnal emission) is a relatively common event in young males and is thought to be triggered by psychological stimuli associ-ated with dreaming.

Erection is the first major component of the male sex act.Parasympathetic action potentials from the sacral region of the spinal cord cause the arteries that supply blood to the erectile tissues to dilate. Blood then fills small venous sinuses called sinusoids in the erectile tissue and compresses the veins, which reduces blood flow from the penis. The increased blood pressure in the sinusoids causes the erectile tissue to become inflated and rigid. Parasympathetic action potentials also cause the mucous glands within the urethra and the bulbourethral glands to secrete mucus.

Failure to achieve erections, or erectile dysfunction (ED), sometimes called impotence, can be a major source of frustration. The inability to achieve erections can be due to reduced testoster-one secretion resulting from hypothalamic, pituitary, or testicularcomplications. In other cases, ED can be due to defective stimula-tion of the erectile tissue by nerve fibers or reduced response of the blood vessels to neural stimulation. Some men can achieve erections by taking oral medications, such as sildenafil (Viagra), tadalafil (Cialis), or verdenafil (Livitra), or by having specific drugs injected into the base of the penis. These drugs increase blood flow into the erectile tissue of the penis, resulting in erection for many minutes.

Emission is stimulated by sympathetic action potentials that originate in the lumbar region of the spinal cord. Action potentials cause the reproductive ducts to contract and stimulate the seminal vesicles and the prostate gland to release secretions. Consequently, semen accumulates in the urethra.

Ejaculation results from the contraction of smooth muscle in the wall of the urethra and skeletal muscles surrounding the base of the penis. Just before ejaculation, action potentials are sent to the skeletal muscles that surround the base of the penis. Rhythmic contractions are produced that force the semen out of the urethra, resulting in ejaculation. In addition, muscle tension increases throughout the body.

Infertility (in-fer-til′i-t̄e) is reduced or diminished fertility. Themost common cause of infertility in males is a low sperm cell count. If the sperm cell count drops to below 20 million sperm cells per milliliter, the male is usually sterile.

The sperm cell count can decrease because of damage to the testes as a result of trauma, radiation, cryptorchidism (See Clinical Impact “Descent of the Testes”), or infections, such as mumps, which block the ducts in the epididymis. Reduced sperm cell counts can also result from inadequate secretion of luteinizing hormone and follicle-stimulating hormone, which can be caused by hypothyroidism, trauma to the hypothalamus, infarctions of the hypothalamus or anterior pituitary gland, or tumors. Decreased testosterone secretion reduces the sperm cell count as well.

Even when the sperm cell count is normal, fertility can be reduced if sperm cell structure is abnormal, as occurs due to chromo-somal abnormalities caused by genetic factors. Reduced sperm cellmotility also results in infertility. A major cause of reduced sperm cell motility is the presence of antisperm antibodies, which are produced by the immune system and bind to sperm cells.

In cases of infertility due to low sperm cell count or reduced motility, fertility can sometimes be achieved by collecting several ejaculations, concentrating the sperm cells, and inserting them into the female’s reproductive tract, a process called artificialinsemination (in-sem-i-nā′sh̆un).