The initial change that results in puberty is most likely matura-tion of the hypothalamus. In girls, puberty, which typically begins between ages 11 and 13 and is largely completed by age 16, is marked by the first episode of menstrual bleeding, which is called menarche (me-nar′ kē;me¯n,month+arche¯,beginning). Duringpuberty, the vagina, uterus, uterine tubes, and external genitalia begin to enlarge. Adipose tissue is deposited in the breasts and around the hips, causing them to enlarge and assume an adult form. In addition, pubic and axillary hair grows. The development of sexual drive is also associated with puberty.

The term menstrual (men′ stroo-ăl) cycle refers to the series of changes that occur in sexually mature, nonpregnant females and that culminate in menses. Menses (men′ sēz; month) is a period of mild hemorrhage, during which part of the endometrium is sloughed and expelled from the uterus. Typically, the menstrual cycle is about 28 days long, although it can be as short as 18 days or as long as 40 days (figure 19.14 and table 19.3). The menstrual cycle results from the cyclical changes that occur in the endome-trium of the uterus. These changes, in turn, result from the cyclical changes that occur in the ovary and are controlled by the secretions of FSH and LH from the anterior pituitary gland. 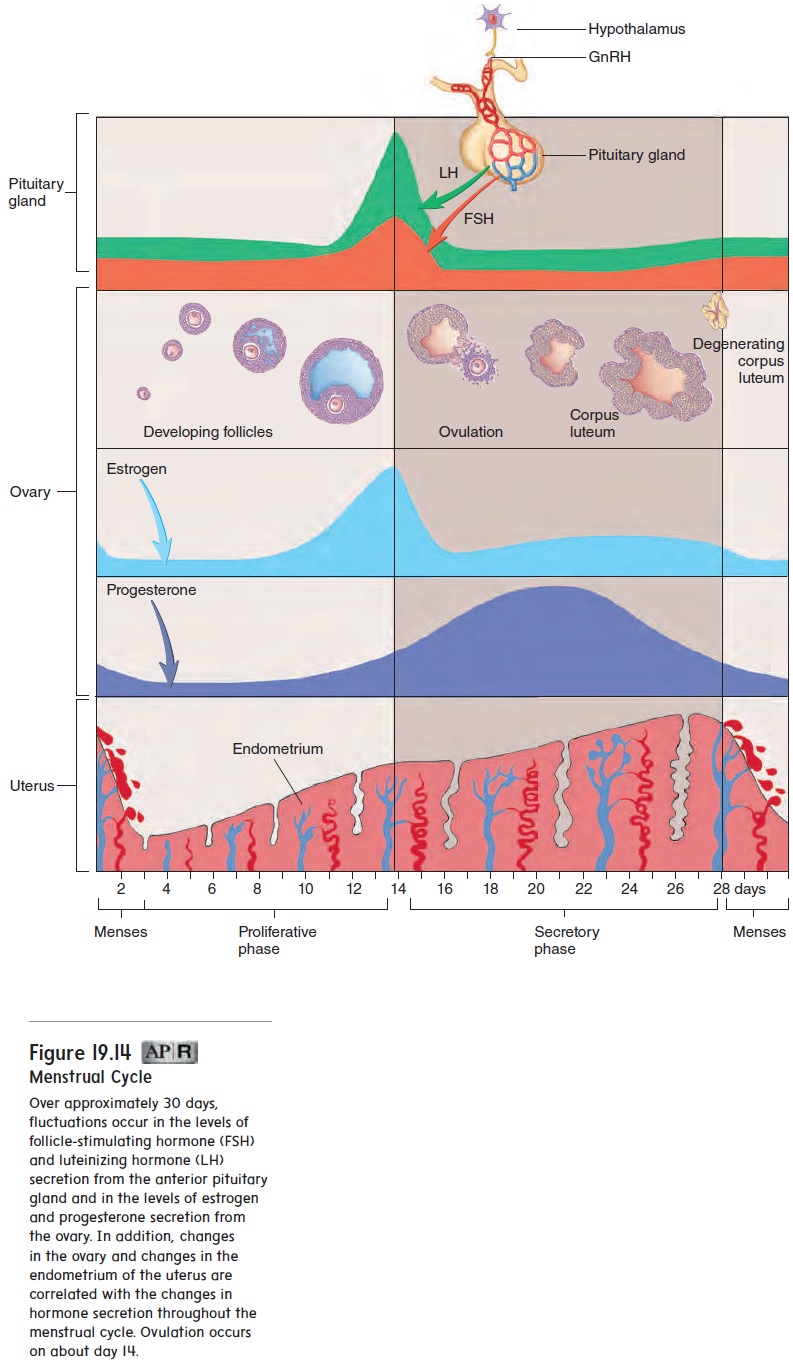 The first day of menstrual bleeding (menses), when the endo-metrium sloughs off, is considered day 1 of the menstrual cycle. Sloughing of the endometrium is inhibited by progesterone butstimulated by estrogen. Menses typically lasts 4 or 5 days and can be accompanied by strong uterine contractions, called men-strual cramps, that are extremely uncomfortable in some women. Menstrual cramps are the result of forceful myometrial contractions that occur before and during menstruation. The cramps can result from excessive secretion of prostaglandins. As the endometrium of the uterus sloughs off, it becomes inflamed, and prostaglandins are produced as part of the inflammation. Many women can alleviate painful cramps by taking medications, such as aspirin-like drugs, that inhibit prostaglandin biosynthesis just before the onset of menstruation. These medications, however, are not effective in treating all painful menstruation, especially when the cause of the pain, such as that experienced by women who have tumors of the myometrium, is not due to the inflammatory response. 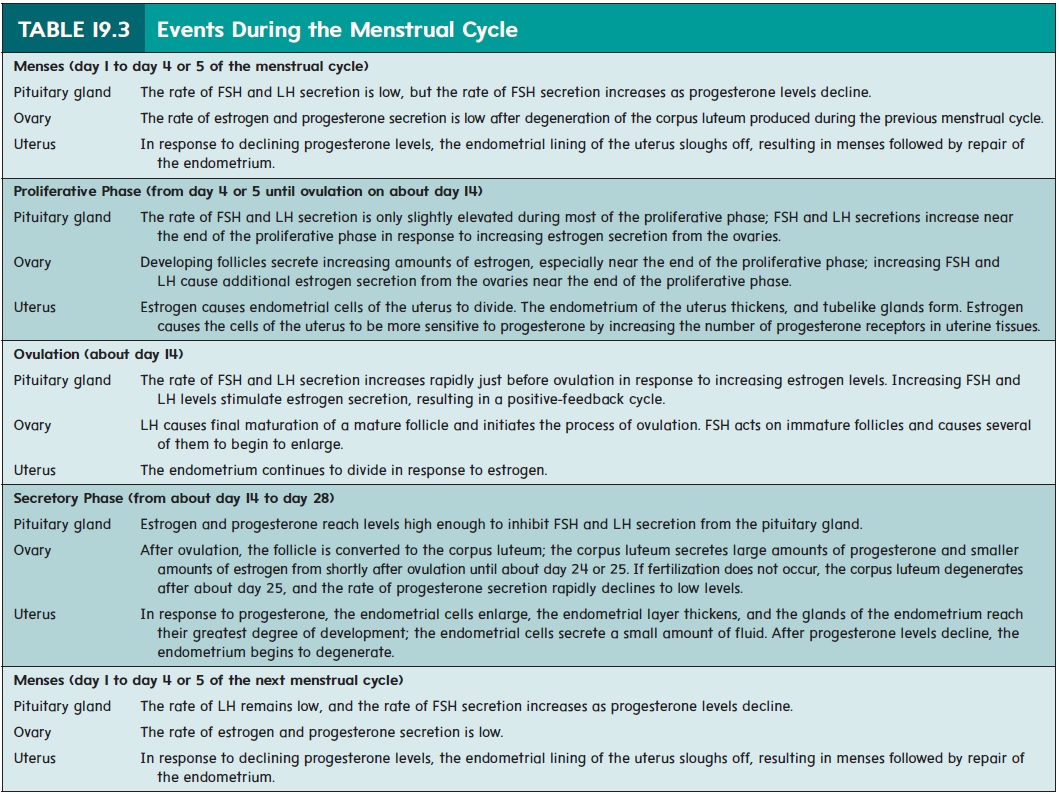 Ovulation occurs on about day 14 of the menstrual cycle, although the timing of ovulation varies from individual to individual and can vary within an individual from one menstrual cycle to the next. To avoid or optimize contraception, it is critical to predict ovulation; however, there is no single reliable method that can pre-dict its exact timing. The simplest method of predicting ovulation is looking for a drop in basal body temperature preceding ovulation, but it is the least reliable method.

The sustained increase of estrogen secreted by the developing follicles stimulates GnRH secretion from the hypothalamus. GnRH, in turn, triggers FSH and LH secretion from the anterior pituitary gland. FSH stimulates estrogen secretion at an increasing rate from the developing follicles. This positive-feedback loop produces a series of larger and larger surges of FSH and LH secretion. Ovulation occurs in response to the large increases in LH levels that normally occur on about day 14 of the menstrual cycle. This large increase in LH is also responsible for the development of the corpus luteum.

Following ovulation, the corpus luteum begins to secrete pro-gesterone and smaller amounts of estrogen. Progesterone acts on the uterus, causing the cells of the endometrium to become larger and to secrete a small amount of fluid. Together, progesterone and estrogen act on the hypothalamus and anterior pituitary gland to inhibit GnRH, LH, and FSH secretion. Thus, LH and FSH levels decline after ovulation.

Between ovulation and the next menses is the secretoryphase of the menstrual cycle, called this because of the smallamount of fluid secreted by the cells of the endometrium. During the secretory phase, the lining of the uterus reaches its greatest degree of development.

When a woman is 40–50 years old, the menstrual cycles become less regular, and ovulation does not occur consistently during each cycle. Eventually, the cycles stop completely. The cessation of menstrual cycles is called menopause (men′ ō -pawz; me¯n, month + pausis, cessation), and the whole time period from the onset of irregular cycles to their complete cessation is called the female climacteric (klı̄-mak′ter-ik).

The major cause of menopause is age-related changes in the ovaries. The number of follicles remaining in the ovaries of menopausal women is small. In addition, the follicles that remain become less sensitive to stimulation by FSH and LH, and therefore fewer mature follicles and corpora lutea are produced.

Older women experience gradual changes in response to the reduced amount of estrogen and progesterone produced by the ovaries (table 19.4). For example, during the climacteric, some women experience sudden episodes of uncomfortable sweating (hot flashes), fatigue, anxiety, temporary decrease in libido, and occasionally emotional disturbances. Many of these symptoms can be treated successfully with hormone replacement therapy (HRT), which usually consists of small amounts of estrogen and progester-one. HRT has been linked to a slightly increased risk of developing breast cancer, uterine cancer, heart attack, stroke, or blood clots. On the positive side, HRT slows the decrease in bone density that can become severe in some women after menopause, and it decreases the risk of developing colorectal cancer.

Sexual drive in females, like sexual drive in males, is dependent on hormones. Testosterone-like hormones, and possibly estrogen, affect brain cells (especially in the area of the hypothalamus) and influence sexual behavior. Testosterone-like hormones are produced primarily in the adrenal cortex. Psychological factors also play a role in sexual behavior. The sensory and motor neural pathways involved in control-ling female sexual responses are similar to those found in the male.

During sexual excitement, erectile tissue within the clitoris and around the vaginal opening becomes engorged with blood. The mucous glands within the vestibule, especially the greater vestibular glands, secrete small amounts of mucus. Larger amounts of mucus-like fluid are also extruded into the vagina through its wall. These secretions provide lubrication to allow easy entry and movement of the penis in the vagina during intercourse. Tactile stimulation of the female’s genitals during sexual intercourse and psychological stim-uli normally trigger an orgasm, or climax. The vaginal and uterine smooth muscle, as well as the surrounding skeletal muscles, con-tract rhythmically, and muscle tension increases throughout much of the body. After the sex act, there is a period of resolution, which is characterized by an overall sense of satisfaction and relaxation. Females are sometimes receptive to further immediate stimulation, however, and can experience successive orgasms. Orgasm is not necessary for fertilization to occur. Ovulation results from hormonal stimuli and is not dependent on the female sex act.