Physiological Transition of the Fetus at Birth

The most profound adaptive changes at birth involve the circulatory and respiratory systems.

PHYSIOLOGICAL TRANSITION OF THE FETUS AT BIRTH

The most profound adaptive changes at birth involve the circulatory and respiratory systems. Failure to make this transition successfully results in fetal death or permanent neurological damage.

At term, the fetal lungs are developed but contain about 90 mL of a plasma ultrafiltrate. During expul-sion of the fetus at delivery, this fluid is normally squeezed from the lungs by the forces of the pelvic muscles and the vagina acting on the baby (the vagi-nal squeeze). Any remaining fluid is reabsorbed by the pulmonary capillaries and lymphatics. Small (pre-term) neonates and neonates delivered via cesarean section do not benefit from the vaginal squeeze and thus typically have greater difficulty in maintaining respirations (transient tachypnea of the newborn). Respiratory efforts are normally initiated within 30 s after birth and become sustained within 90 s. Mild hypoxia and acidosis as well as sensory stimulation— cord clamping, pain, touch, and noise—help initiate and sustain respirations, whereas the outward recoil of the chest at delivery aids in filling the lungs with air.

Lung expansion increases both alveolar and arterial oxygen tensions and decreases pulmonary vascular resistance. The increase in oxygen tension is a potent stimulus for pulmonary arterial vasodi-lation. The resultant increase in pulmonary blood flow and augmented flow to the left heart elevates left atrial pressure and functionally closes the fora-men ovale. The increase in arterial oxygen tension also causes the ductus arteriosus to contract and functionally close. Other chemical mediators that may play a role in ductal closure include acetylcho-line, bradykinin, and prostaglandins. The overall result is elimination of right-to-left shunting and establishment of the adult circulation (Figure 40–5). Anatomic closure of the ductus arteriosus does not usually occur until about 2–3 weeks, whereas closure of the foramen ovale takes months if it occurs at all. 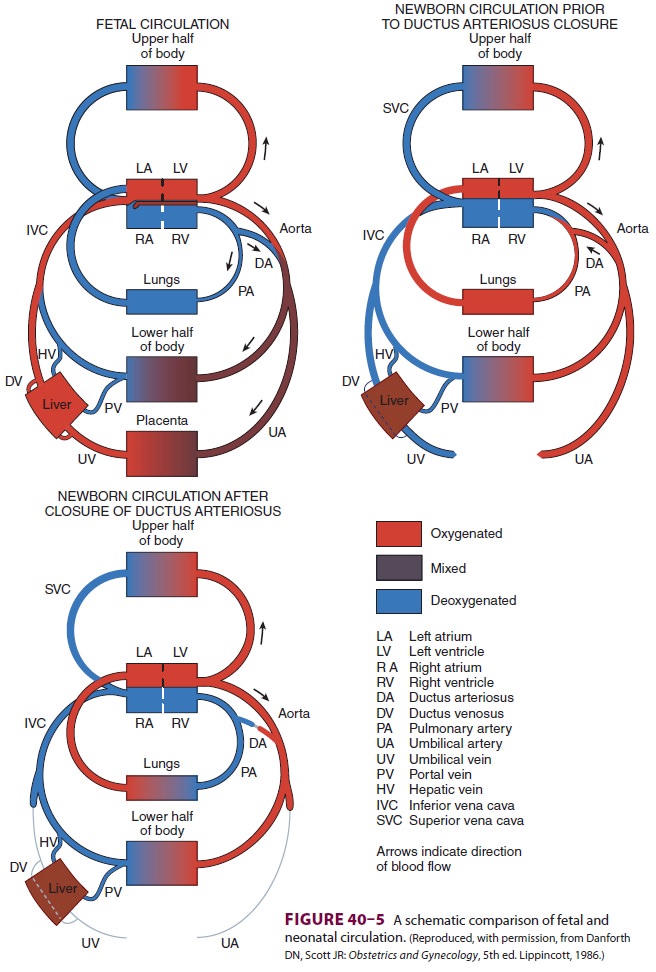 Hypoxia or acidosis during the first few days of life can prevent or reverse these physiological changes, resulting in persistence of (or return to) the fetal circulation, or persistent pulmonary hyper-tension of the newborn. A vicious circle is estab-lished where the right-to-left shunting promotes hypoxemia and acidosis, which in turn promote more shunting (Figure 40–6). Right-to-left shunting may occur across the foramen ovale, the ductus arte-riosus, or both. Unless this circle is broken, neonatal demise can occur rapidly.