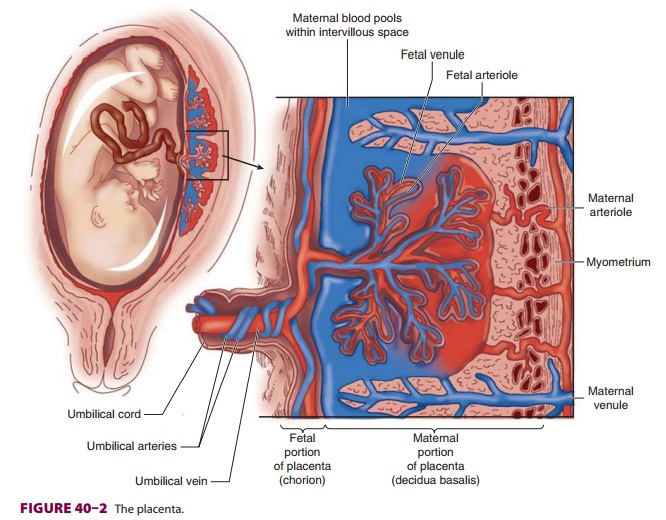 A normal uteroplacental circulation ( Figure 40–1) is critical in the development and maintenance of a healthy fetus.

A normal uteroplacental circulation ( Figure 40–1) is critical in the development and maintenance of a healthy fetus. Uteroplacental insufficiency is an important cause of intrauterine fetal growth retarda-tion, and when severe, can result in fetal demise. The integrity of this circulation is, in turn, dependent on both adequate uterine blood flow and normal pla-cental function. 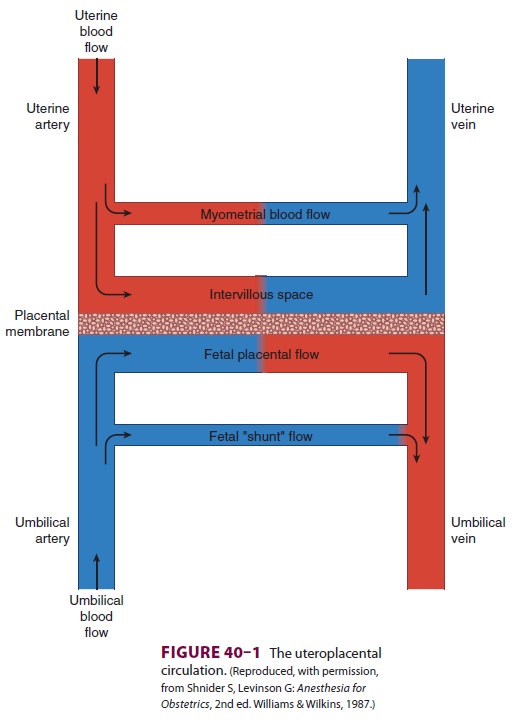 flow by vasoconstriction. Ephedrine, whichhas considerable β-adrenergic activity, has traditionally been considered the vasopressor of choice for hypotension during pregnancy. However, clinical studies suggest that α-adrenergic agonists such as phenylephrine and metaraminol are just as effective in treating hypotension in pregnant patients and are associated with less fetal acidosis than ephedrine.Paradoxically, hypertensive disorders are often associated with decreased uterine blood flow due to generalized vasoconstriction. Uterine contractions decrease uterine blood flow by elevating uterine venous pressure and compressing arterial ves-sels as they traverse the myometrium. Hypertonic contractions during labor or during oxytocin infu-sions can critically compromise uterine blood flow.

The fetus is dependent on the placenta for respira-tory gas exchange, nutrition, and waste elimination. The placenta is formed by both maternal and fetal tissues and derives a blood supply from each. The resulting exchange membrane has a functional area of about 1.8 m2.

The placenta (Figure 40–2) is composed of projec-tions of fetal tissue (villi) that lie in maternal vascular spaces (intervillous spaces). As a result of this arrange-ment, the fetal capillaries within villi readily exchange substances with the maternal blood that bathes them. Maternal blood in the intervillous spaces is derived from spiral branches of the uterine artery and drains into the uterine veins. Fetal blood within villi is derived from the umbilical cord via two umbilical arteries and returns to the fetus via a single umbilical vein. 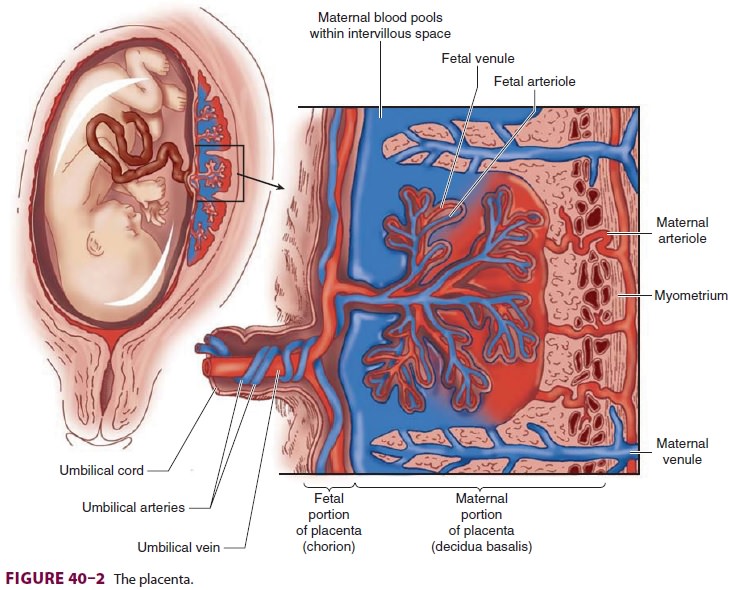 Placental exchange can occur by one of six mecha-nisms:

·        Diffusion—Respiratory gases and small ionsare transported by diffusion. Most drugs used in anesthesia have molecular weights well under 1000 and consequently can readily diffuse across the placenta.

·        Facilitated diffusion—Glucose enters the fetalcirculation down the concentration gradient (no energy is consumed) facilitated by a specific trans-porter molecule.

·        Active transport—Amino acids, vitamin B12, fattyacids, and some ions (calcium and phosphate) uti-lize this mechanism.

·        Iron enters the fetal circulation in this way, facili-tated by ferritin and transferrin.

At term, fetal oxygen consumption averages about 7 mL/min per kilogram of fetal body weight. Fortunately, because of multiple adaptive mecha-nisms, the normal fetus at term can survive 10 min or longer instead of the expected 2 min in a state of total oxygen deprivation. Partial or complete oxygen deprivation can result from umbilical cord compression, umbilical cord prolapse, placental abruption, severe maternal hypoxemia, or hypoten-sion. Compensatory fetal mechanisms include redis-tribution of blood flow primarily to the brain, heart, placenta, and adrenal gland; decreased oxygen con-sumption; and anaerobic metabolism.

Transfer of oxygen across the placenta is depen-dent on the ratio of maternal uterine blood flow to fetal umbilical blood flow. The reserve for oxygen transfer is small even during normal pregnancy. Normal fetal blood from the placenta has a Pao2 of only 30–35 mm Hg. To aid oxygen transfer, the fetal hemoglobin oxygen dissociation curve is shifted to the left such that fetal hemoglobin has greater affinity for oxygen than does maternal hemoglobin (whose curve is already shifted to the right; see the section on Respiratory Effects). In addition, fetal hemoglo-bin concentration is usually 15 g/dL (compared with approximately 12 g/dL in the mother).

Carbon dioxide readily diffuses across the pla-centa. Maternal hyperventilation (see the section on Respiratory Effects) increases the gradient for the transfer of carbon dioxide from the fetus into the maternal circulation. Fetal hemoglobin has less affin-ity for carbon dioxide than do adult forms of hemo-globin. Carbon monoxide readily diffuses across the placenta, and fetal hemoglobin has greater affinity for carbon monoxide than do adult forms.

Transfer of a drug across the placenta is reflected by the ratio of its fetal umbilical vein to maternal venous concentrations (UV/MV), whereas its uptake by fetal tissues can be correlated with the ratio of its fetal umbilical artery to umbilical vein concentra-tions (UA/UV). Fetal effects of drugs administered to parturients depend on multiple factors, including route of administration (oral, intramuscular, intra-venous, epidural, or intrathecal), dose, timing of administration (both relative to delivery as well as contractions), and maturity of the fetal organs (brain and liver). Thus, a drug given hours before delivery or as a single intravenous bolus during a uterine contraction just prior to delivery (when uterine blood flow is maximally reduced) is unlikely to pro-duce high fetal levels. Fortunately, current anesthetic techniques for labor and delivery generally have minimal fetal effects despite significant placental transfer of anesthetic agents and adjuncts.

All inhalational agents and most intravenous agents freely cross the placenta. Inhalational agentsgenerally produce little fetal depression when they are given in limited doses (<1 MAC) and delivery occurs within 10 min of induction. Ketamine, pro-pofol, and benzodiazepines readily cross the pla-centa and can be detected in the fetal circulation. Fortunately, when these agents (with the excep-tion of benzodiazepines) are administered in usual induction doses, drug distribution, metabolism, and possibly placental uptake may limit fetal effects. Although most opiates readily cross the placenta, their effects on neonates at delivery vary consider-ably. Newborns appear to be more sensitive to the respiratory depressant effect of morphine compared with other opioids. Although meperidine produces respiratory depression, peaking 1–3 h after admin-istration, it produces less than morphine; butorpha-nol and nalbuphine produce even less respiratory depression but still may have significant neurobe-havioral depressant effects. Although fentanyl read-ily crosses the placenta, it appears to have minimal neonatal effects unless larger intravenous doses (>1 mcg/kg) are given immediately before delivery. Epidural or intrathecal fentanyl, sufentanil, and, to a lesser extent, morphine, generally produce minimal neonatal effects. Alfentanil causes neonatal depres-sion similar to meperidine. Remifentanil also readily crosses the placenta and has the potential to produce respiratory depression in newborns. Fetal blood con-centrations of remifentanil are generally about half those of the mother just prior to delivery. The UA/ UV ratio is about 30%, suggesting fairly rapid metab-olism of remifentanil in the neonate. The highly ion-ized nature of muscle relaxants impedes placental transfer, resulting in minimal effects on the fetus.

Local anesthetics are weakly basic drugs that are principally bound to α1-acid glycoprotein. Placental transfer depends on three factors: (1) pKa , (2) maternal and fetal pH, anddegree of protein binding. Except for chloropro-caine, fetal acidosis increases fetal-to-maternal drug ratios because binding of hydrogen ions to the non-ionized form causes trapping of the local anestheticin the fetal circulation. Highly protein-bound agents diffuse slowly across the placenta; thus, greater pro-tein binding of bupivacaine and ropivacaine, com-pared with that of lidocaine, likely accounts for their lower fetal blood levels. Chloroprocaine has the least placental transfer because it is rapidly broken down by plasma cholinesterase in the maternal circulation.

Most commonly used anesthetic adjuncts also readily cross the placenta. Thus, maternally admin-istered ephedrine, β-adrenergic blockers (such as labetalol and esmolol), vasodilators, phenothiazines, antihistamines (H1 and H2), and metoclopramide are transferred to the fetus. Atropine and scopolamine, but not glycopyrrolate, cross the placenta; the latter’s quaternary ammonium (ionized) structure results in only limited transfer.

Intravenous anesthetic agents have variable effects on uteroplacental blood flow. Propofol and barbitu-rates are typically associated with small reductions in uterine blood flow due to mild to moderate, dose-dependent decreases in maternal blood pressure. A small induction dose, however, can produce greater reductions in blood flow as a result of sympathoad-renal activation (due to light anesthesia). Ketamine in doses of less than 1.5 mg/kg does not appreciably alter uteroplacental blood flow; its hypertensive effect typically counteracts any vasoconstriction. Uterine hypertonus may occur with ketamine at doses of more than 2 mg/kg. Etomidate likely has minimal effects, but its actions on uteroplacental cir-culation have not been well-described.

Volatile  inhalational  anesthetics  decrease blood pressure and, potentially, uteroplacental blood flow. In concentrations of less than 1 MAC, however, their effects are generally minor, consist-ing of dose-dependent uterine relaxation and minorreductions in uterine blood flow. Nitrous oxide has minimal effects on uterine blood flow when adminis-tered with a volatile agent. In animal studies, nitrousoxide alone can vasoconstrict the uterine arteries. High blood levels of local anesthetics—particularly lidocaine—cause uterine arterial vasocon-striction. Such levels are seen only with unintentional intravascular injections and occasionally following paracervical blocks (in which the injection site is in close proximity to the uterine arteries), and local absorption or injection into these vessels cannot be ruled out). Spinal and epidural anesthesia typically do not decrease uterine blood flow except when arte-rial hypotension occurs. Moreover, uterine blood flow during labor may actually improve in preeclamp-tic patients following epidural anesthesia; a reduc-tion in circulating endogenous catecholamines likely decreases uterine vasoconstriction. The addition of dilute concentrations of epinephrine to local anes-thetic solutions does not appreciably alter uterine blood flow. Intravascular uptake of the epinephrine from the epidural space may result in only minor sys-temic β-adrenergic effects.