Although the majority of women of childbearing age are healthy and would be considered to be at mini-mal operative risk, pregnancy, certain maternalâ€“ fetal factors, and preexisting medical conditions significantly increase surgical and obstetric risks.

Although the majority of women of childbearing age are healthy and would be considered to be at mini-mal operative risk, pregnancy, certain maternalâ€“ fetal factors, and preexisting medical conditions significantly increase surgical and obstetric risks.

Maternal mortality is usually presented as the number of women who die while pregnant (or within 42 days of pregnancy termination) after excluding accidents and unrelated causes. This number is often indexed to the total number of live births. The maternal mortality index has decreased nearly 100-fold since 1900. Likely due to better reporting, it rose slightly in the United States to 21 deaths per 100,000 live births in 2010. The world average is 400 deaths per 100,000 live births. Of all maternal deaths worldwide, 99% occur in Africa, Asia, Latin America, and the Caribbean.

In the United States, overall mortality risk is greater for women older than 35 years of age, black women, and women who do not receive prenatal care. The leading causes of death associated with a live birth in 2010 were cardiovascular diseases (13.5%), cardiomyopathy (12.6%), hemorrhage (11.9%), noncardiovascular diseases (11.8%), hyper-tensive disorders of pregnancy (11.1%), infection/ sepsis (11.1%), thrombotic pulmonary embolism (5.6%), amniotic fluid embolism (5.6%), cerebro-vascular accidents (5.3%) and anesthesia compli-cations (0.6%) Of all maternal deaths, only 34% of patients died within 24 h of delivery, whereas 55% died between 1 and 42 days, and another 11% died between 43 days and 1 year. Direct causes of mater-nal deaths are more clearly detailed from Canadian data, which show that, in addition to pulmonary embolism and preeclampsia/pregnancy-induced hypertension (PIH), amniotic fluid embolism and intracranial hemorrhage emerge as important addi-tional causes of death.

Severe obstetric morbidity may be a more sensi-tive measure of outcome than maternal mortality. Data from the United Kingdom suggest that inci-dence of severe obstetric morbidity is 12 per 1000 deliveries, 100 times more common than mortality. Risk factors include age greater than 34 years, non-white ethnic group, multiple pregnancy, history of hypertension, previous postpartum hemorrhage, and emergency cesarean delivery. Table 41â€“1 lists the estimated incidence of the most common causes of severe morbidity; thromboembolic disease was deliberately excluded because of the difficulty

In making the diagnosis in nonfatal cases. By far the most common morbidities encountered in obstetrics are severe hemorrhage and severe preeclampsia. 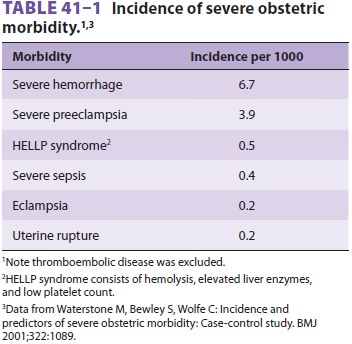 Anesthesia accidents and mishaps account for approximately 2â€“3% of maternal deaths. Data col-lected between 1985 and 1990 suggested a maternal mortality of 32 deaths per 1,000,000 live births due to general anesthesia and 1.9 deaths per 1,000,000 live births due to regional anesthesia. More recent data between 1998 and 2005 suggest a lower over-all maternal mortality from anesthesia (about 1.2 % of live births), possibly due to greater use of regional anesthesia for labor and cesarean delivery. Most deaths occur during or after cesarean section. Moreover, the risk of an adverse outcome appears to be much greater with emergent than with elective cesarean sections.

Obstetric anesthesia care accounts for approx-imately 12% of the American Society of Anesthesiologists (ASA) Closed Claims database claims. A comparison of obstetric anesthesia claims from 1990 to 2003 or with pre-1990 claims shows a decrease in maternal deaths, as well as a decrease in respiratory-damaging events (aspi-ration, difficult intubation, esophageal intuba-tion, and inadequate oxygenation/ventilation). Although newborn deaths and brain damage also decreased over this period, they remained a leading cause of obstetric anesthesia malpractice claims. Maternal nerve injury was more common in claims reported after 1990 compared with ear-lier years.