Figure 6–1 shows the organization of skeletal muscle, demonstrating that all skeletal muscles are composed of numerous fibers ranging from 10 to 80 micrometers in diameter.

Figure 6–1 shows the organization of skeletal muscle, demonstrating that all skeletal muscles are composed of numerous fibers ranging from 10 to 80 micrometers in diameter. Each of these fibers is made up of successively smaller subunits, also shown in Figure 6–1 and described in subsequent paragraphs. 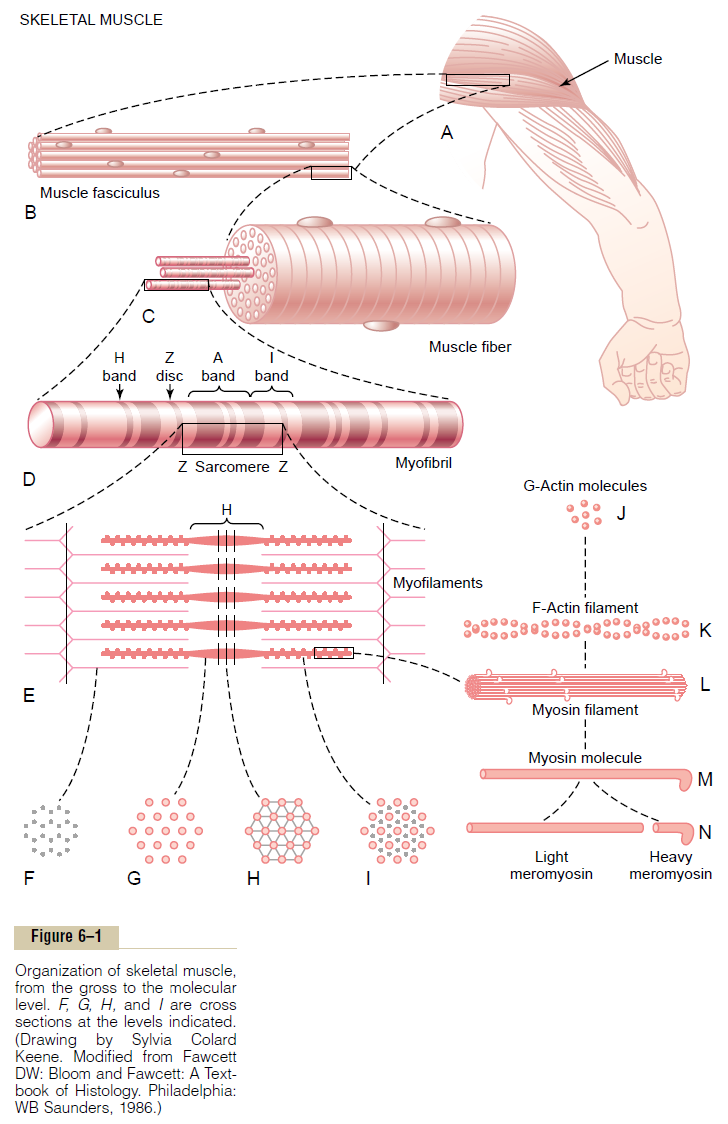 In most skeletal muscles, each fiber extends the entire length of the muscle. Except for about 2 per cent of the fibers, each fiber is usually innervated by only one nerve ending, located near the middle of the fiber.

Sarcolemma. The sarcolemma is the cell membrane of the muscle fiber. The sar-colemma consists of a true cell membrane, called the plasma membrane,and an outer coat made up of a thin layer of polysaccharide material that contains numerous thin collagen fibrils. At each end of the muscle fiber, this surface layer of the sarcolemma fuses with a tendon fiber, and the tendon fibers in turn collect into bundles to form the muscle tendons that then insert into the bones.

Myofibrils; Actin and Myosin Filaments. Each muscle fiber contains several hundredto several thousand myofibrils, which are demonstrated by the many small open dots in the cross-sectional view of Figure 6–1C. Each myofibril (Figure 6–1D and E) is composed of about 1500 adjacent myosin filamentsand 3000 actin fil-aments, which are large polymerized protein molecules that are responsible forthe actual muscle contraction.These can be seen in longitudinal view in the elec-tron micrograph of Figure 6–2 and are represented diagrammatically in Figure 6–1, parts E through L. The thick filaments in the diagrams are myosin, and the thin filaments are actin.

Figure 6–1E also shows that the ends of the actin filaments are attached to a so-called Z disc. From this disc, these filaments extend in both directions to 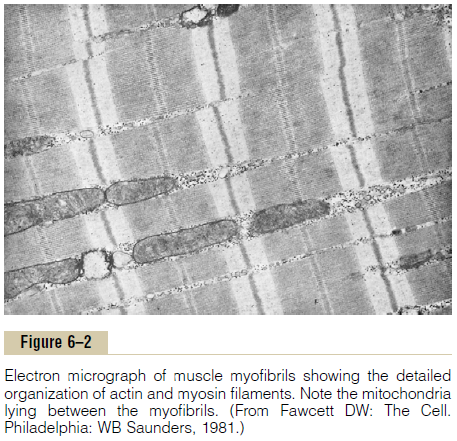 interdigitate with the myosin filaments. The Z disc, which itself is composed of filamentous proteins dif-ferent from the actin and myosin filaments, passes crosswise across the myofibril and also crosswise from myofibril to myofibril, attaching the myofibrils to one another all the way across the muscle fiber. Therefore, the entire muscle fiber has light and dark bands, as do the individual myofibrils.These bands give skeletal and cardiac muscle their striated appearance.

The portion of the myofibril (or of the whole muscle fiber) that lies between two successive Z discs is called a sarcomere. When the muscle fiber is contracted, as shown at the bottom of Figure 6–4, the length of the sarcomere is about 2 micrometers. At this length, the actin filaments completely overlap the myosin filaments, and the tips of the actin filaments are just beginning to overlap one another. We will see later that, at this length, the muscle is capable of generating its greatest force of contraction. 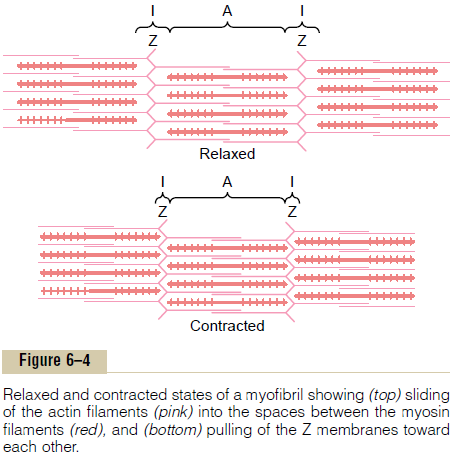 What Keeps the Myosin and Actin Filaments in Place?

Titin Filamentous Molecules. The side-by-side rela-tionship between the myosin and actin filaments is dif-ficult to maintain. This is achieved by a large number of filamentous molecules of a protein called titin. Each titin molecule has a molecular weight of about 3 million, which makes it one of the largest protein mol-ecules in the body. Also, because it is filamentous, it is very springy. These springy titin molecules act as aframework that holds the myosin and actin filaments in place so that the contractile machinery of the sar-comere will work. There is reason to believe that the titin molecule itself acts as template for initial forma-tion of portions of the contractile filaments of the sarcomere, especially the myosin filaments.

Sarcoplasm. The many myofibrils of each muscle fiberare suspended side by side in the muscle fiber. The spaces between the myofibrils are filled with intracel-lular fluid called sarcoplasm, containing large quanti-ties of potassium, magnesium, and phosphate, plus multiple protein enzymes. Also present are tremen-dous numbers of mitochondria that lie parallel to the myofibrils. These supply the contracting myofibrils with large amounts of energy in the form of adenosine triphosphate (ATP) formed by the mitochondria. 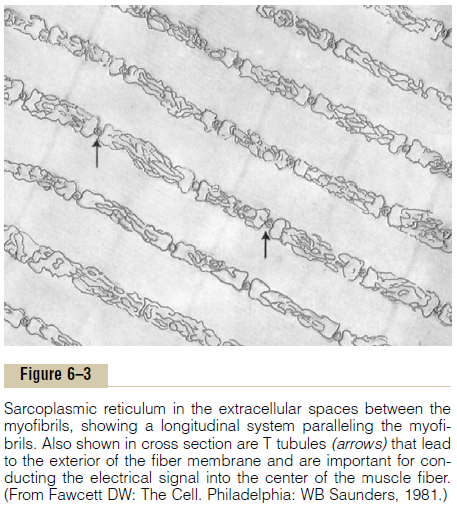