Many features of muscle contraction can be demonstrated by eliciting single muscle twitches.

Many features of muscle contraction can be demonstrated by eliciting single muscle twitches. This can be accomplished by instantaneous electrical excitation of the nerve to a muscle or by passing a short electrical stimulus through the muscle itself, giving rise to a single, sudden contraction lasting for a fraction of a second. 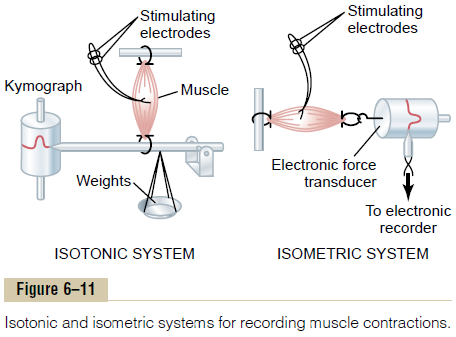 In the isometric system, the muscle contracts against a force transducer without decreasing the muscle length, as shown on the right in Figure 6–11. In the iso-tonic system, the muscle shortens against a fixed load; this is illustrated on the left in the figure, showing a muscle lifting a pan of weights. The characteristics of isotonic contraction depend on the load against which the muscle contracts, as well as the inertia of the load. However, the isometric system records strictly changes in force of muscle contraction itself. Therefore, the iso-metric system is most often used when comparing the functional characteristics of different muscle types.

Muscles. The human body has many sizes of skeletalmuscles—from the very small stapedius muscle in the middle ear, measuring only a few millimeters long and a millimeter or so in diameter, up to the very large quadriceps muscle, a half million times as large as the stapedius. 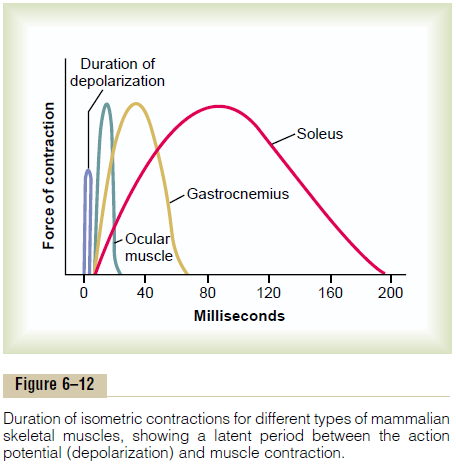 Fast Versus Slow Muscle Fibers. As we discuss on sports physiology, every muscle of the body is composed of a mixture of so-called fast andslow muscle fibers, with still other fibers gradated between these two extremes. The muscles that react rapidly are composed mainly of “fast” fibers with only small numbers of the slow variety. Conversely, the muscles that respond slowly but with prolonged contraction are composed mainly of “slow” fibers. The differences between these two types of fibers are as follows.