Home | | Medical Physiology | Effect of Amount of Actin and Myosin Filament Overlap on Tension Developed by the Contracting Muscle
Posted On :  26.07.2017 03:22 pm

Effect of Muscle Length on Force of Contraction in the Whole Intact Muscle. 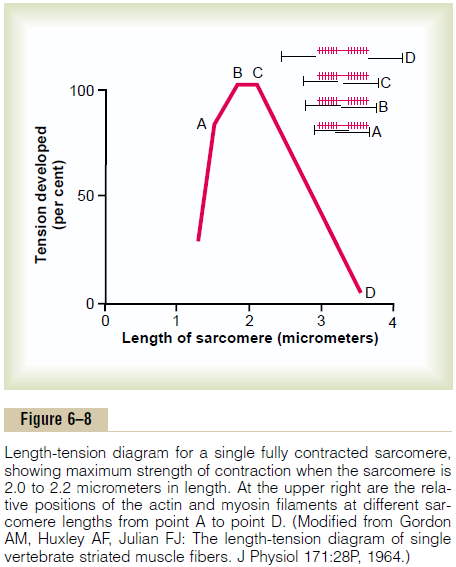 Effect of Muscle Length on Force of Contraction in the Whole Intact Muscle. The top curve of Figure 6–9 is similar tothat in Figure 6–8, but the curve in Figure 6–9 depicts tension of the intact, whole muscle rather than of a single muscle fiber. The whole muscle has a large amount of connective tissue in it; also, the sarcomeres in different parts of the muscle do not always contract the same amount. Therefore, the curve has somewhat different dimensions from those shown for the individual muscle fiber, but it exhibits the same general form for the slope in the normal range of contraction, as noted in Figure 6–9. 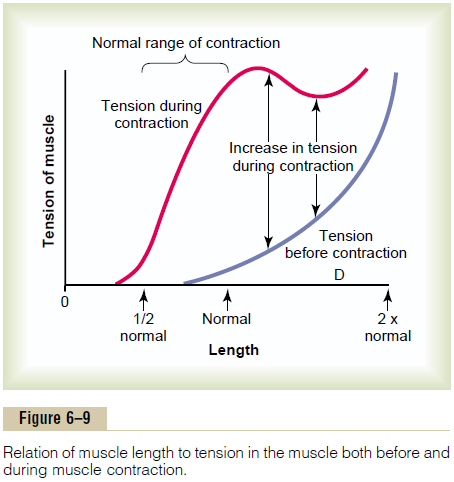 Note in Figure 6–9 that when the muscle is at its normal resting length, which is at a sarcomere length of about 2 micrometers, it contracts upon activation with the approximate maximum force of contraction.

However, the increase in tension that occurs during contraction, called active tension, decreases as the muscle is stretched beyond its normal length—that is, to a sarcomere length greater than about 2.2 microm-eters. This is demonstrated by the decreased length of the arrow in the figure at greater than normal muscle length.