The effects of training depend on the metabolic path-ways used during training.

The effects of training depend on the metabolic path-ways used during training. Hence, the type of train-ing should be geared to activating the metabolic pathway primarily used by the activity in which the person is involved. Figure 4.16 shows the energy pathways used for different types of exercises. 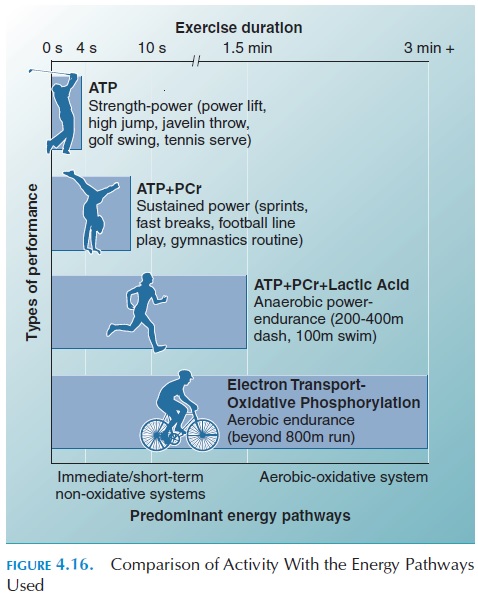 Altering training duration, frequency, and inten-sity in such a way to overload the muscle results in a training response. The response is specific to the type of overload imposed.

For example, if swimming is the mode of training, the greater response would be seen when tested by swimming. This is because adapta-tions take place in the specifically trained muscles. Figure 4.16 shows the energy pathways used for dif-ferent types of exercises.

The training response varies among individuals. For example, the individual’s genetic make-up and relative fitness at the beginning of training play an important part. Therefore, exercise programs should be designed for the specific individual.

Unfortunately, the adaptations that occur with training decrease rapidly when training stops. Within 1 to 2 weeks of detraining, the physiologic adapta-tions significantly reduce and many of the improve-ments are lost within 1 to 2 months.

As mentioned, the adaptation to training depends on the energy pathways used during training. When a person uses activities that involve stressing the anaer-obic metabolism, as in sprint-power training, the lev-els of ATP, creatine phosphate, free creatine, and glycogen are increased in individual muscle fibers of those muscles used in training. The levels of enzymes and myoglobin used in this metabolic pathway are also increased. There is also an increased capacity to generate lactate.

When aerobic training is used, the adaptations oc-cur to improve transport and use of oxygen. The mus-cle fibers in trained muscles contain larger and more mitochondria and enzymes used in aerobic metabo-lism than those in untrained muscle. The capacity to use fat for energy is also increased. This is of benefit because it helps conserve glycogen stores. There is also an increase in the capacity to use carbohydrates during exercise. The changes occurring in the fiber type vary according to the overload used. The mus-cles used in training hypertrophy. Hypertrophy de-notes an increase in fiber size; the number of muscle fibers does not increase. As a result of the presence of testosterone, hypertrophy is more prevalent in men than in women. Training for power combined with a high protein diet speeds the process of hypertrophy.

The cardiovascular adaptations resulting in im-proved oxygen delivery to the muscle are summa-rized in Figure 4.17. 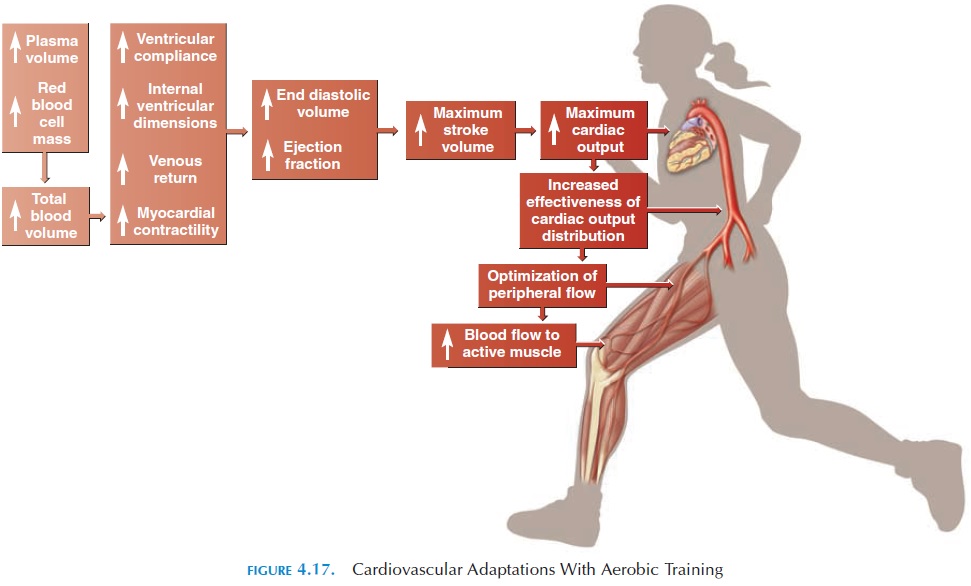 There is a decrease in resting and exercise heart rate and an increase in stroke volume and maximal cardiac output. The drop in heart rate is attributed to increased parasympathetic activity and decreased sympathetic activity. The change in stroke volume is a result of in-creased left ventricular volume, greater compliance (capacity to stretch) of the heart tissue, longer time be-tween contractions that increase diastolic filling, and a general improvement in the contractility of the heart. The change in maximal cardiac output is directly re-lated to the changes in stroke volume.

There is a marked increase in plasma volume soon after the beginning of training. This increase con-tributes to the increase in stroke volume, end-diastolic volume, oxygen transport, and temperature regulation during exercise.

There is an improvement in the capacity of trained muscles to extract oxygen from the blood. The blood flow to the trained muscles and distribution of car-diac output is also altered. There is decreased blood flow to the kidney and gastrointestinal tract and in-creased cutaneous blood flow. The latter facilitates the dissipation of heat produced during exercise. There is an increase in total muscle blood flow as a result of increased cardiac output, increased cross-sectional areas of blood vessels and number of capil-laries per gram of muscle tissue.

The blood flow to the heart muscle is also modified with training. There is an increase in cross-sectional area of coronory blood vessels, recruitment of collat-eral vessels, and number of capillaries. This con-tributes to better oxygen supply to the myocardium.

Training has the capacity to reduce both systolic and diastolic blood pressure during rest and exercise.

Changes in the blood lactate concentrations have also been observed with training. There is a decrease in the rate of formation and clearance of lactate dur-ing exercise. Trained individuals also tolerate a more acidic pH than untrained counterparts. This implies that the body’s capacity to regulate acid-base balance is improved with training.

One significant adaptation is the improvement in breathing efficiency. Changes in the respiratory mus-cles result in reduced use of oxygen for respiration. This, in turn, reduces the fatiguing effects of exercise on the respiratory muscles and frees oxygen for use by the active muscles. In trained individuals, the res-piratory rate is decreased during exercise and the tidal volume (volume of air breathed in per breath) is increased. This is advantageous because it allows for a longer time for oxygen extraction from the inspired air. It must be noted that these adaptive changes are specific to the type of exercises used and type of train-ing (i.e., observed when the specifically trained mus-cles are used).

A number of factors affect the magnitude of adapta-tional changes described above. The initial level ofaerobic fitness has a bearing on the improvementsseen with training. As expected, those at a lower fit-ness level can expect greater improvements. With en-durance training, the average improvement ranges from 5% to 25%.

A major factor that affects improvement is exerciseintensity. Exercise intensity can be measured in manyways. The energy expended per unit time, the per-centage of maximal oxygen capacity (VO2 max), power output, lactate levels, exercise heart rate or percentage of maximum heart rate, metabolic rate, and rating of perceived exertion are some measures used (the details of these measures are beyond the scope of this book). In general, physiologic improve-ments are seen when the exercise intensity increases the heart rate to 55% to 70% of maximal heart rate. An approximation of maximal heart rate can be cal-culated by subtracting the individual’s age in yearsfrom 220 (HRmax=220-age [yr]).

Twenty to 30 minutes of continuous exercise at 70% HRmax have been shown to produce optimum training effects. Shorter duration of training—as low as 3 to 5 minutes daily—have produced effects in poorly conditioned individuals. Longer exercise du-ration at a lower intensity has been shown to be ben-eficial as well. Higher intensity training of shorter duration also shows significant improvement.

The effect of different training frequency (i.e., 2- or 5-day training) is controversial. In general, more fre-quency is beneficial when lower intensity is used or weight loss is desired. To produce weight loss, each exercise session should last at least 60 minutes and it should be at an intensity that uses 300 kcal or more.

In terms of exercise type, it has been found that the effects are similar as long as the exercise involves large muscle groups. Bicycling, running, walking, climbing stairs, rowing, in-line skating, and skipping rope are examples of exercises that involve large mus-cle groups and provide sufficient overload to improve aerobic capacity. The adaptation to exercise may be seen within a few weeks and excessive exercise does not speed improvement. It has been shown that the frequency and duration of exercise may be reduced to maintain a level of improvement. However, the inten-sity of exercise must be maintained.

Another factor that affects the physiologic re-sponses is genetic endowment. Although the propor-tion of slow and fast muscle fibers in a specific mus-cle is genetically determined, fibers can change to intermediate type by activity.

The method of training should match the type of ac-tivity. For activities, such as football or weightlifting, in which the body relies on energy derived from ATP and phosphocreatine, the muscles in question must be engaged in repeated 5–10 second maximal bursts of exercise.

If the activity extends beyond 10 seconds, the body relies on energy derived by glycolysis and with resul-tant production of lactic acid. For such activities, the individual may have to train in bouts of about 1-minute maximum exercise with a short rest in be-tween.

In interval training, high intensity exercise and short rest are alternated. In this way, a person is able to perform a large amount of high intensity exercise. An impossible feat if they had to do the exercise con-tinuously. Physiologically, interval training results in less build up of lactate and muscle fatigue. The in-tensity, duration of exercise, and rest will depend on the improvements desired.

Many athletes experience the syndrome of overtrain-ing. Here, the athlete fails to adapt to training, with deterioration of normal performance. The athlete has difficulty recovering completely after a workout. Muscle soreness and stiffness; increased susceptibil-ity to infection; gastrointestinal disturbances; sleep disturbances; loss of appetite; overuse injuries; fa-tigue; altered reproductive function; and mood changes such as apathy, depression, and irritability are some other symptoms. These changes are attrib-uted to biologic and psychological influences.

Overtraining syndrome is described as two clinical forms: sympathetic (less common) and parasympa-thetic (more common). The sympathetic form mayreflect a perpetual stimulation of the sympathetic sys-tem as a result of the interaction of increased train-ing, competition, and other stresses of day-to-day liv-ing. The parasympathetic form is characterized by overstimulation of the parasympathetic system dur-ing rest and exercise. It may result from interactions between overload of the neuromuscular, endocrine, nervous, psychological, immunologic, and metabolic (glycogen depletion, amino acid imbalances) factors. There are changes in the function and relationship between the hypothalamus, pituitary, gonads, and adrenal glands.

Overtraining may be prevented by adequate rest and recovery between training and proper nutrition and hydration during training. Athletes with over-training syndrome may require weeks and sometimes even months of rest to recover.

A number of women exercise during pregnancy. It has been found that the physiologic changes in the maternal cardiovascular system follow normal re-sponse patterns. The stress on the mother offered by moderate exercise is mainly a result of the additional weight gain. There is no evidence to show that exer-cise during pregnancy increases the risk of fetal death or low–birth-weight. Fetal hypoxia, fetal hy-pothermia, and low fetal glucose supply are potential risks of intensive maternal training.

Muscles that are not used extensively reduce in size. This process is known as atrophy. Both tone and mass are lost if the muscle is not regularly stimulated by motor nerves. Atrophy is seen in those individuals paralyzed by spinal injuries (denervation atrophy). It can occur even if the nerves are intact. For exam-ple, disuse atrophyoccurs in limbs that have been in a cast.