Although the contractile mechanism is the same, muscle characteristics are modified in many ways to enable the body to adjust force and speed of contrac-tion and direction and range of motion.

Although the contractile mechanism is the same, muscle characteristics are modified in many ways to enable the body to adjust force and speed of contraction and direction and range of motion. At the microscopic level, variations in contraction duration exist between muscles. Macroscopically, variations in fascicle arrangement and size of motor units are present. Together, structural and functional variations allow us to execute both crude and intricate, movements.

The ultimate force transmitted to bone across joints depends, to a large extent, on the way muscle fibers are organized (e.g., the direction of fiber arrangement, where the muscle originates and inserts—closer or further from the joint—and in which direction they pull). Of course, the range of motion in a joint also de-pends on the articular surface, the pliability of structures around the joint, such as ligaments and tendons,and the relaxation of muscles that oppose the move-ment. The therapist must keep all these factors inmind when caring for a client with reduced mobility.

Some factors that affect the speed, direction, and force of contraction of muscle are:

The contraction phase is the period when the ten-sion rises to a peak as the crossbridges react with the active sites of the actin filaments (Figure 4.7). The re-laxation phase is the period when the crossbridgesdetach and the muscle reaches its original state. The duration of the muscle twitch, produced by a single impulse, varies individually according to function. For example, eye muscles have a short twitch (per-haps 10 ms). This is important because fast eye movements must occur for the eyes to be able to fol-low an object. However, the twitch of muscles such as the soleus lasts for about 100 ms. 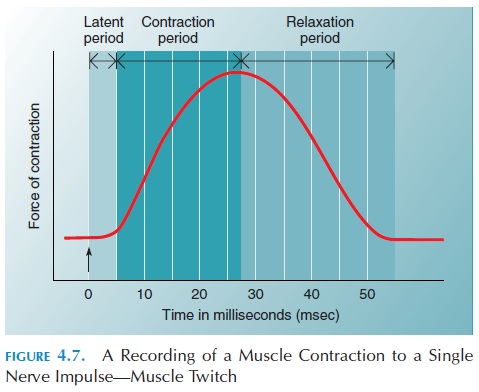 Role of Initial Length of Muscle on Tension Developed

In the game of tug-of-war, the tension produced on one side is proportional to the number of people pulling on the rope. Similarly, the tension produced in individual muscle fibers is proportional to the number of myosin heads interacting with the actin in all the sarcomeres in all of the myofibrils in the mus-cle fiber. The interaction largely depends on the amount of overlap between myosin and actin myofil-aments before contraction begins.

When a muscle is stimulated, only the myosin heads within the zone of overlap can bind to active sites on actin and produce tension. If the sarcomere is as short as possible, the myosin heads are jammed into the adjacent Z lines, pivoting cannot occur and no tension is produced. Also, the actin (thin) fila-ments on each side of the sarcomere slide over and cover each other, reducing the active sites exposed to myosin. In this situation, only a little tension is pro-duced when the muscle fiber is stimulated.

The highest tension is produced when the maxi-mum number of myosin-actin interactions can occur (see Figure 4.8). If the sarcomere length is increased even further, the overlap between actin and myosin decreases and tension is reduced. If the length is in-creased until there is no overlap at all, no tension can be produced. In the body, the length of the resting muscle is close to its optimal length. It is prevented from stretching too much by ligaments, other mus-cles, and surrounding organs. When this muscle is stimulated, maximal tension can be produced. For example, the biceps brachii is close to its optimal length when the elbow is extended. Maximal tension, therefore, can be achieved when it is stimulated in this state. Of course, force of movement will be af-fected by the state of the joint across which the muscle acts and also the manner in which the contracting muscle is attached to the bone (Refer to the lever ac-tion of muscle). 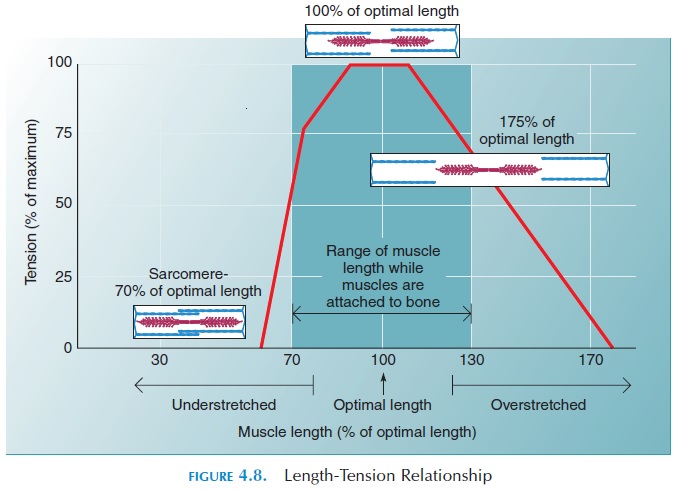 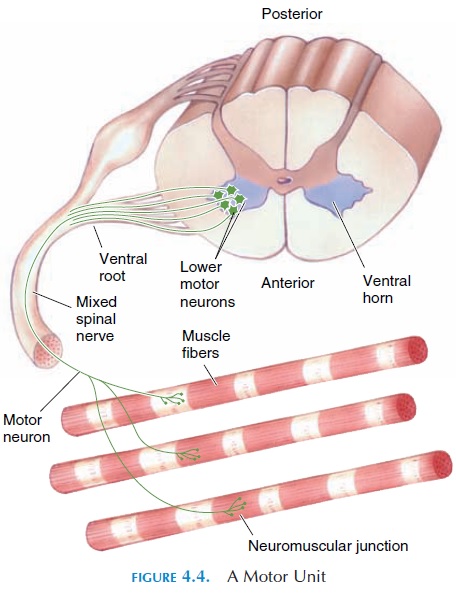 The body also alters tension by altering the frequency of stimulation sent down the nerve. It has been shown that the force of muscle contraction increases up to a point if the frequency of stimulation is in-creased. This has been explained by the availability of calcium in the sarcoplasm. In each muscle fiber, the calcium released from the sarcoplasmic reticulum during the first impulse is still available in the sar-coplasm if the next impulse arrives soon after. That is, the next impulse arrives before calcium can be pumped back into the reticulum. 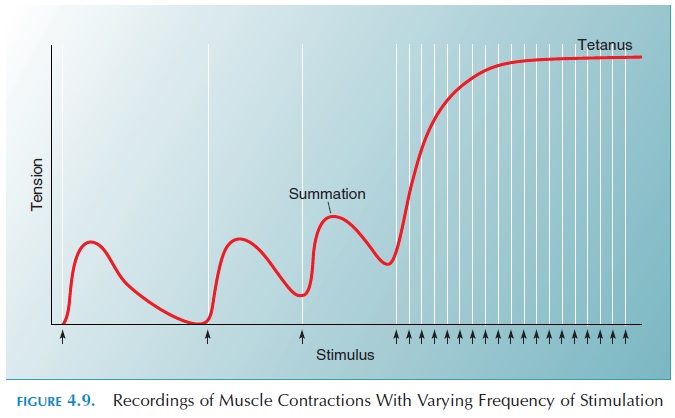 Wave summation is the increase in tension seen insuccessive contractions. Because the muscle tension increases in a steplike manner (and, if recorded, ap-pears like stairs), it is called the treppe, or staircasephenomenon. If the impulse frequency is rapid, thecontraction phase of subsequent contractions fuse and the muscle exhibits sustained contraction known as tetanization or tetanus (see Figure 4.9).

Organization of the Muscle Fibers

Muscle fiber arrangement and direction are impor-tant in the tension produced, direction of movement, and range of motion across joints.

The muscle fibers are bundled together as fascicles. The arrangement of fascicles in relation to each other and to the tendon where they are attached varies from one muscle to another. Five different fascicular arrangement patterns have been identified—parallel,convergent (triangular), pennate, fusiform, and circular (see Figure 4.10). 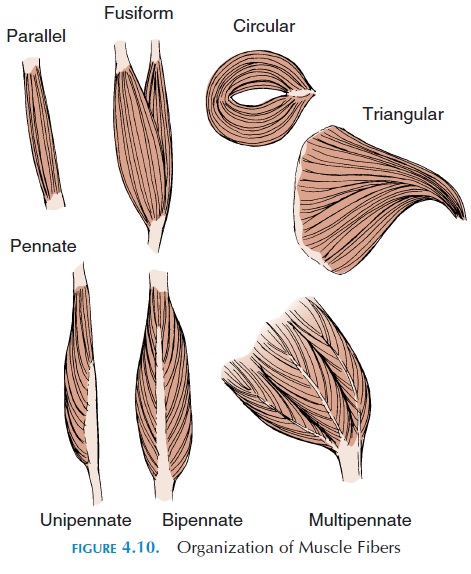 These muscles have fibers that run parallel to each other along the long axis of the muscle. Most mus-cles of the body are parallel, some flat and some cylindrical with tendons on one or both ends. In muscles with tendons on both ends, the muscle ap-pears spindle-shaped, with a central body, gaster or belly (gaster,meaning stomach). The biceps brachii,the muscle which produces the bulge in front of the upper arm, is a typical example of a muscle with a belly. When parallel muscles contract, the entire muscle shortens equally, as all the muscle fibers are parallel. The force of contraction, of course, will de-pend upon the number of muscle fibers that have been stimulated. An example of parallel muscle fiber is the stylohyoid muscle.

The convergent muscles have a broad base but attach at a common site. The muscle fibers are arranged like a fan. The muscle may pull at a tendon or a connective tissue sheet. A typical example is the pectoralis muscle located in the front of the upper chest. Because the fibers are not parallel, convergent muscles can be ma-nipulated to pull at different directions by stimulating specific groups of cell fibers at any given moment. If all the fibers contract at the same time, however, the force exerted is not as high as that of the parallel muscle with equivalent number of muscle fibers because, in convergent muscles, muscle fibers pulling on opposite sides of the tendon are pulling in different directions.

These muscles are feather-shaped (penna, meaning feather). The fascicles are arranged obliquely, forming a common angle with a central tendon that may extend along almost the entire length of the muscle. Because the fascicles pull on the tendon at an angle, they do not move the tendon as far as a parallel muscle with equiv-alent muscle fibers. However, this arrangement facili-tates the accommodation of more muscle fibers in a unit area compared with a parallel muscle, making it possible for a pennate muscle to exert more force than a parallel muscle of equal size. If all of the fascicles are on the same side of the tendon, the muscle is termed unipennate. An example of unipennate muscle is the extensor digitorum, a muscle that extends the fingers.

Here, fascicles that are almost parallel, end in flat ten-dons. The digastric muscle is an example.

In circular muscles, the fibers are arranged in a circle around an opening. Contraction of a circular muscle, therefore, closes or reduces the size of the opening and relaxation opens it or makes the opening wider. These muscles guard entrances and exits of internal pas-sages. The muscles around the mouth (orbicularis oris) and the anus (sphincter ani) are typical examples.

The force, speed, and distance of movement are mod-ified by the site of muscle connection to the bone, the lever. A lever is a rigid structure that moves on a fixedpoint, thefulcrum. A good example of a lever system is a seesaw. The seesaw moves on a central, fixed point—the fulcrum. To move one end of the seesaw— the resistance—power must be exerted on the other side—the effort, or force.

In the body, the bone is the lever and the joint is the fulcrum; effort, or force, is provided by the con-traction of the muscle (see Figure 4.11). The presence of the lever can change the direction of the applied force, the distance and speed of movement of the ap-plied force, and the effective strength of the force.

Look at the three types of levers we use in everyday life to make our jobs easier. Our bodies do the same thing.

The first-class lever (Figure 4.11A) has the ful-crum in the center, and the effort and resistance are located on either side. There are not many muscles at-tached this way in the body. The muscles of the neck are examples in which the head balances on the cer-vical vertebrae (the fulcrum), and the muscles in the back of the neck (effort) extend the head (resistance).

The second-class lever (Figure 4.11B) has the re-sistance in the middle. A good example is the wheel-barrow in which the handle is lifted (effort) to move the weight of the wheelbarrow (resistance) on the front wheel (the fulcrum). In this type of lever, a smaller force is able to lift a larger force. However, the handle is moved up a greater distance, with a greater speed than the actual weight.

Muscles at-tached to bones in this manner are able to lift greater weights at the expense of distance and speed. An ex-ample of such an attachment in the body is the calf muscle when standing on your toes; the calf muscle (effort) lifts the body and the bodyweight passes through the ankle (resistance) on the stationary toes (fulcrum).

Third-class levers (Figure 4.11C), the most com-mon, have the effort applied to the center. Flex your arm: the biceps muscle is attached to the bone in the forearm, the lever; the elbow is the fulcrum. Contrac- tion of the biceps attached to the middle of your fore-arm raises your hand. In this arrangement, force is compromised; however, the speed and distance moved are increased.

For a mathematical example, when the biceps con-tracts, it must exert about 180 kg (397 lb) tension to support a 30 kg (66 lb) weight held in the hand (the distance of the hand with the resistance is 6 times further away from the fulcrum than the attachment of the biceps). However, the hand moves 45 cm (18 in) when the site of attachment of the biceps moves only 7.5 cm (3 in). Therefore, the force exerted is six times the weight supported, but the distance the weight moves is six times the distance moved by the insertion point of the muscle. This example gives an idea of how speed and force can be altered by the site where the muscle is attached on a bone.

The proportion of fast twitch, slow twitch, and inter-mediate fibers also determines the characteristic of muscle contraction. This is considered in detail in the section on muscle performance.

Availability of Nutrients and Oxygen

The availability of nutrients and oxygen also affect the characteristics of muscle contraction. To a large extent, this is determined by the blood flow to the muscle and the capacity of the muscle to use nutri-ents and oxygen. The presence of myoglobin and glycogen storage in the muscle also plays a part.