Home | | The Massage Connection ANATOMY AND PHYSIOLOGY | Myofilament: the Specialized proteins of Myofibrils
Posted On :  31.07.2017 02:10 pm

Myofilament: the Specialized proteins of Myofibrils

Each myofibril is made up of myofilaments, which are regular arrangements of protein filaments.

THE MYOFILAMENT: THE SPECIALIZED PROTEINS OF MYOFIBRILS

Each myofibril is made up of myofilaments, which are regular arrangements of protein filaments (Figure 4.3). Myofilaments, unlike the myofibrils, do not run the entire length of the muscle fiber, but are arranged in smaller sections called sarcomeres. The sarcom-ere is the functional unit (the smallest structure(s) of an organ that can perform the function) of the mus-cle, and it is the activity at the level of the sarcomere that causes muscle to contract. 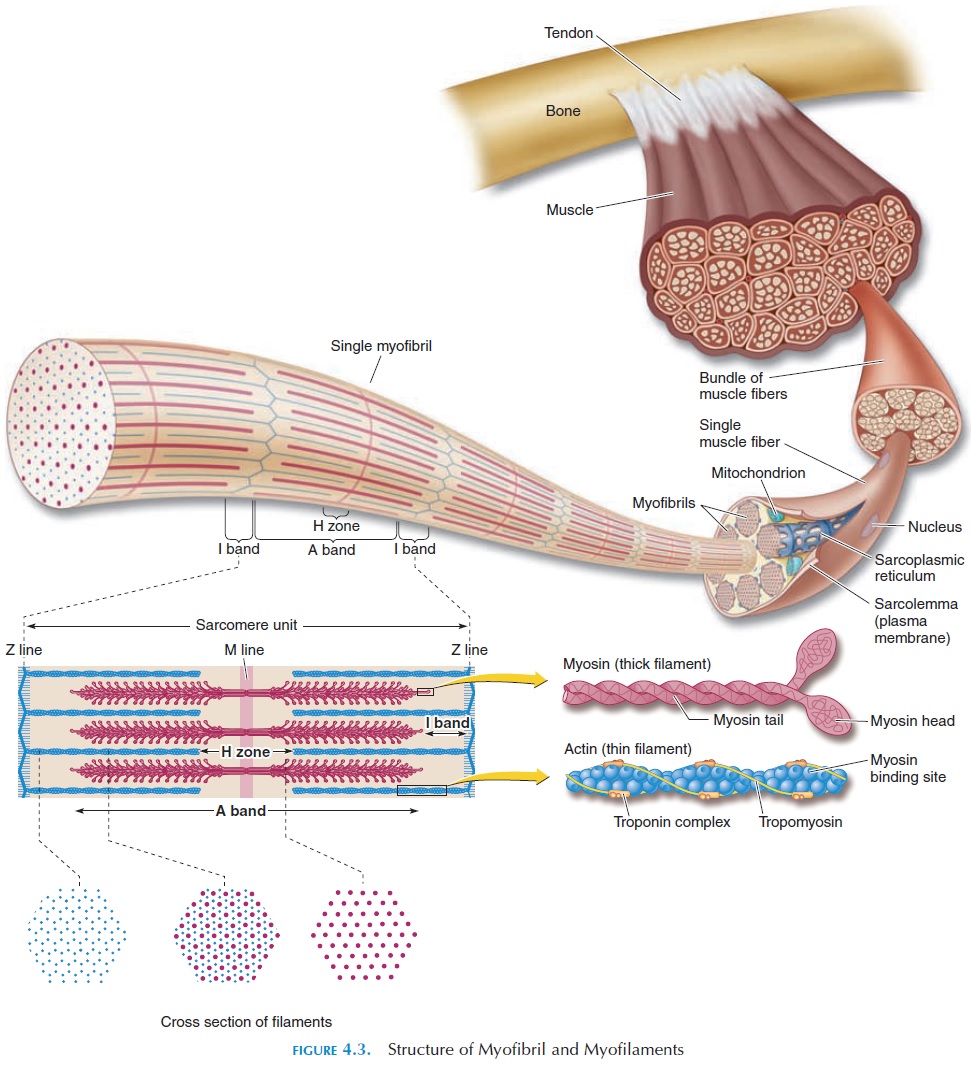 Arrangement of Thick and Thin Filaments

The thin, actin filament consists of three types of pro-teins that play a key role in muscle contraction (Fig-ure 4.3).

Actin is actually twisted strands of globular pro-teins. An analogy would be two strings of pearls twisted together. Each globular molecule has a site that has an affinity for myosin filament. These sites (active sites or myosin-binding sites) are covered by tropomyosin, another strand of protein. Tropomyosinin this position prevents actin-myosin interaction.

A third type of protein (troponin) is located at reg-ular intervals on the tropomyosin. Troponin holds the tropomyosin in position. It also carries a site; how-ever, this site has an affinity for calcium.

Each thick filament consists of many (approximately 300) myosin molecules. Each myosin molecule re-sembles two hockey sticks that have the shafts wound together, with a long arm (tail) and an angulated base (head). The myosin molecules are arranged with all the heads directed outward. Therefore, the heads project toward adjacent actin molecules. All tails face the M line, so that there are some heads to the right and some to the left of the M line.

The heads of the myosin molecules have a site that has an affinity for actin. Because the heads interact with the actin during contraction, they are also known ascrossbridges. The head has the ability to move forward and backward on the tail, as if there was a hinge at the junction of the head and the tail. It is the movement of the heads that results in reduc-tion in muscle size during contraction.

Other than actin and myosin, many other proteins help secure the myofilaments in place and provide the elasticity and extensibility of myofibrils.

To understand this section, familiarity with the de-tailed structure of the muscle fiber is crucial. If nec-essary, review the details and the Figures.

The actual process of muscle contraction can be explained by the sliding filament theory.