The proton-substrate-co-transport results in very high concentrations of sucrose and amino acids in the sieve tubes.

The proton-substrate-co-transport results in very high concentrations of sucrose and amino acids in the sieve tubes. Depending on the plant and on growth conditions, the concentration of sucrose in the phloem sap amounts to 0.6 to 1.5 mol/L, that of polyols 0.5 mol/L and the sum of the amino acids ranges from 0.05 to 0.5 mol/L. Aphids turned out to be useful helpers for obtaining phloem sap samples for such analyses. An aphid, after some attempts, can insert its stylet exactly into a sieve tube. As the phloem sap is under pressure, it flows through the tube of the stylet and is consumed by the aphid (Fig. 13.4). The aphid takes up more sucrose than it can metabolize and excretes the surplus as honeydew, which is a sticky sugary layer e.g., covering aphid-infested house plants. When the stylet of a feed-ing aphid is severed by a laser beam, the phloem sap exudes from the sieve tube through the stump of the stylet. Although only very small amounts of phloem sap can be obtained (0.05–0.1×10 -6 L/h), it is sufficient for quan-titative assays using modern technology. 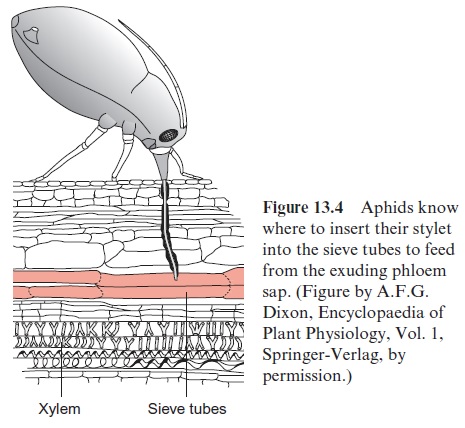 In plants performing photosynthesis in the presence of radioactively labeled CO2, phloem transport velocities of 30 to 150 cm/h have been meas-ured. This rapid transport proceeds by mass flow, driven by very efficient pumping of sucrose, polyols and amino acids into the sieve tubes and by their withdrawal at the sites of consumption. This mass flow is driven by many transversal osmotic gradients. The surge of this mass flow carries along com-pounds present at low concentrations, such as phytohormones. The direction of mass flow is governed entirely by the consumption of the phloem contents. Depending on what is required, phloem transport can proceed in an upward direction (e.g., from the mature leaf to the growing shoot or flower) or down-wards into the roots or storage tubers. Since the phloem sap is under high pressure and the phloem is highly branched, wounding the vascular tissue might result in the phloem sap “bleeding”. Protective mechanisms prevent this. Due to the presence of substrates in the phloem sap and the enzymes of sucrose synthase and callose synthase, which are probably membrane-bound, the sieve pores of damaged sieve tubes are sealed by the formation of callose , and damaged sieve tubes are disconnected. Sieve tubes are also rapidly sealed by the so-called P proteins.