Parent drugs or their phase I metabolites that contain suitable chemical groups often undergo coupling or conjugation reactions with an endogenous substance to yield drug conjugates (Table 4–3). In general, conjugates are polar molecules that are readily excreted and often inactive. Conjugate formation involves high-energy intermediates and specific transfer enzymes. Such enzymes (transferases) may be located in microsomes or in the cytosol. Of these, uridine 5′-diphosphate (UDP)-glucuronosyl transferases (UGTs) are the most dominant enzymes (Figure 4–4). These microsomal enzymes catalyze the coupling of an activated endogenous substance (such as the UDP derivative of glucuronic acid) with a drug (or endogenous compound such as bilirubin, the end product of heme metabolism). Nineteen UGT genes (UGTA1and UGT2) encode UGT proteins involved in the metabolism of drugs and xenobiotics. Similarly, 11 human sulfotransferases (SULTs) catalyze the sulfation of substrates using 3′-phosphoadenosine 5´-phosphosulfate (PAPS) as the endogenous sulfate donor. Cytosolic and microsomal glutathione (GSH) trans-ferases (GSTs) are also engaged in the metabolism of drugs and xenobiotics, and in that of leukotrienes and prostaglandins, respectively. Chemicals containing an aromatic amine or a hydra-zine moiety (eg, isoniazid) are substrates of cytosolic N-acetyltransferases(NATs), encoded by NAT1 and NAT2 genes,which utilize acetyl-CoA as the endogenous cofactor. 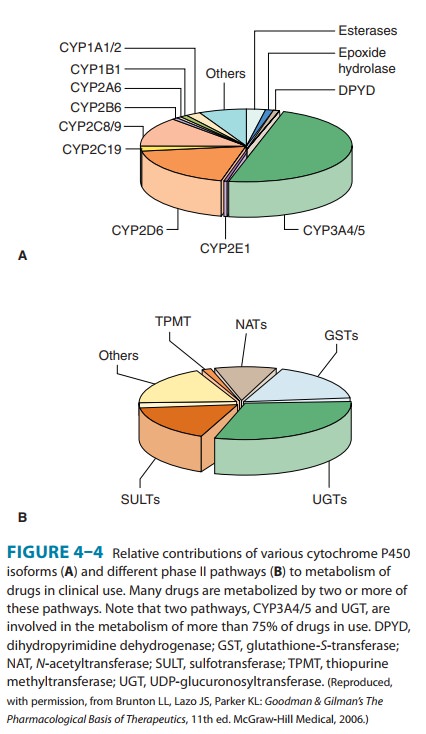 S-Adenosyl-L-methionine (SAMe; AdoMet)-mediated O-, N-,and S-methylation of drugs and xenobiotics by methyltransferases (MTs) also occurs. Finally, endobiotic, drug, and xenobiotic epoxides generated via P450-catalyzed oxidations can also be hydrolyzed by microsomal or cytosolic epoxide hydrolases (EHs). Conjugation of an activated drug such as the S-CoA derivative of benzoic acid, with an endogenous substrate, such as glycine, also occurs. Because the endogenous substrates originate in the diet, nutrition plays a critical role in the regulation of drug conjugations. 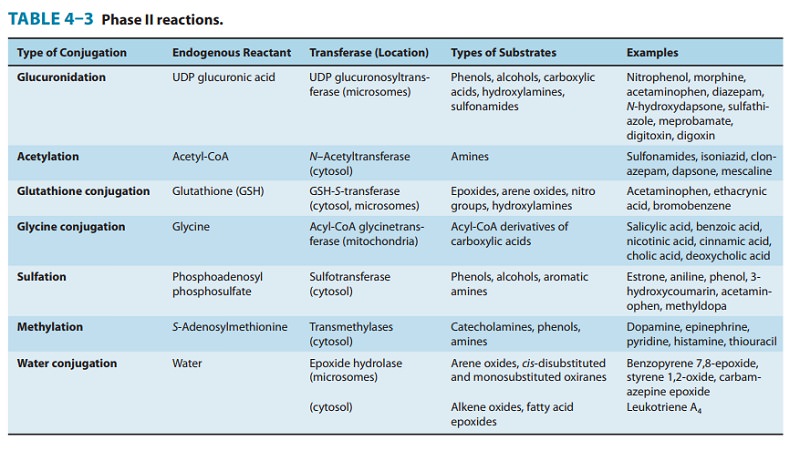 Drug conjugations were once believed to represent terminal inactivation events and as such have been viewed as “true detoxi-fication” reactions. However, this concept must be modified, because it is now known that certain conjugation reactions (acyl glucuronidation of nonsteroidal anti-inflammatory drugs, O-sulfation of N-hydroxyacetylaminofluorene, and N-acetylationof isoniazid) may lead to the formation of reactive species respon-sible for the toxicity of the drugs. Furthermore, sulfation is known to activate the orally active prodrug minoxidil into a very effica-cious vasodilator, and morphine-6-glucuronide is more potent than morphine itself.