Metabolism of Drugs to Toxic Products

Metabolism of drugs and other foreign chemicals may not always be an innocuous biochemical event leading to detoxification and elimination of the compound.

METABOLISM OF DRUGS TO TOXIC PRODUCTS

Metabolism of drugs and other foreign chemicals may not always be an innocuous biochemical event leading to detoxification and elimination of the compound. Indeed, as previously noted, several compounds have been shown to be metabolically transformed to reactive intermediates that are toxic to various organs. Such toxic reactions may not be apparent at low levels of exposure to parent compounds when alternative detoxification mechanisms are not yet overwhelmed or compromised and when the availability of endog-enous detoxifying cosubstrates (GSH, glucuronic acid, sulfate) is not limited. However, when these resources are exhausted, the toxic pathway may prevail, resulting in overt organ toxicity or carcinogenesis. The number of specific examples of such drug-induced toxicity is expanding rapidly. An example is acetamino-phen (paracetamol)-induced hepatotoxicity (Figure 4–5). Acetaminophen, an analgesic antipyretic drug, is quite safe in therapeutic doses (1.2 g/d for an adult). It normally undergoes glucuronidation and sulfation to the corresponding conjugates, which together make up 95% of the total excreted metabolites. The alternative P450-dependent GSH conjugation pathway 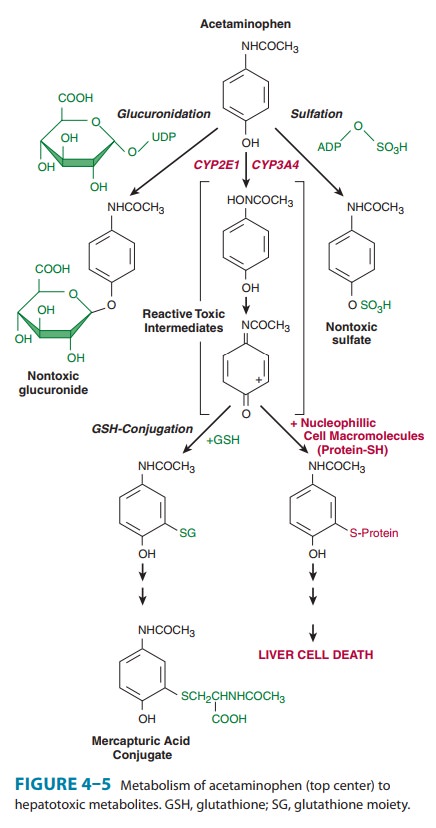 accounts for the remaining 5%. When acetaminophen intake far exceeds therapeutic doses, the glucuronidation and sulfation path-ways are saturated, and the P450-dependent pathway becomes increasingly important. Little or no hepatotoxicity results as long as hepatic GSH is available for conjugation. However, with time, hepatic GSH is depleted faster than it can be regenerated, and a reactive, toxic metabolite accumulates. In the absence of intracel-lular nucleophiles such as GSH, this reactive metabolite (N-acetylbenzoiminoquinone) reacts with nucleophilic groups of cellular proteins, resulting in hepatotoxicity.The chemical and toxicologic characterization of the electro-philic nature of the reactive acetaminophen metabolite has led to the development of effective antidotes—cysteamine and N-acetylcysteine. Administration of N-acetylcysteine (the safer of the two) within 8–16 hours after acetaminophen overdosage has been shown to protect victims from fulminant hepatotoxicity and death . Administration of GSH is not effective because it does not cross cell membranes readily.