Scalability and Availability are the two important issues because pervasive architecture should as scalable to meet the large amount of user who are subscribing for applications. According to scalability, when a user accessing the application and if it is not available then the user will assume that it does not works and the user will switch on to next service. Thus the service should be available whenever needed.

A scalable topology for pervasive computing is shown in the Fig. This shows several gateways used for accessing the server.

PDA gateway for the PDAs.

Network Dispatcher which routes incoming request to the approporiate server. Support handling of HTTP request from a particular client is 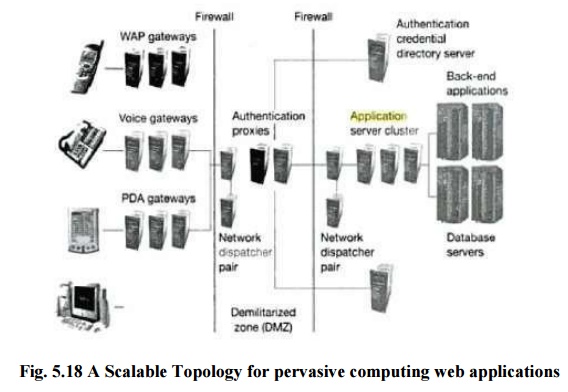 Look and feel of the system is given by User Interface Designers.

Programmers are concerned with technologies such as HTML and JSP and implementing the application logic.

Those experts who monitor the gateways are responsible in knowing the technologies such as WML, Voice XML.

The model-view-controller (MVC) pattern is a good choice when implementing Web applications.

As devices are very different from each other, we can assume that one controller will fit all device classes. In the MVC pattern the controller encapsulates the dialog flow of an application.

This flow will be different for different classes of devices, such as WAP phone, voice-only phones, PCs, or PDAs.

To support multiple controllers, we replace the servlet's role to that of a simple dispatcher that invokes the appropriate controller depending on the type of device being used. 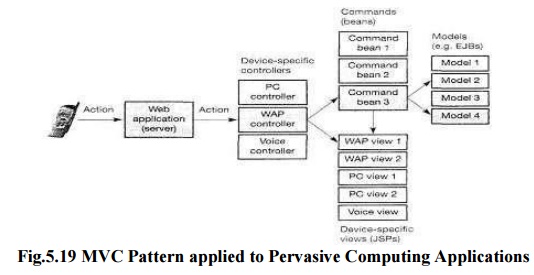 Web applications have to be secured by appropriate encryption, authentication, using authorization mechanisms.

The secure pervasive access architecture is designed to process client requests on the application server in a secure and efficient way. 

It addresses user identification, authentication, and authorization of invocation of application depending on configurable security policies. 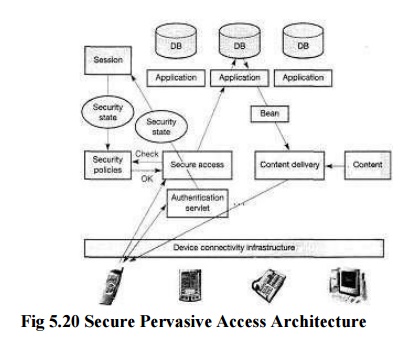 All incoming requests originate from the device connectivity infrastructure. This infrastructure may include different kinds of gateways that convert device specific requests to a canonical form, i.e. HTTP request that may carry information about the device type, the desired language and the desired reply content type, e.g. HTML, WML, or Voice XML. Examples of gateways in the device connectivity layer are voice gateways with remote Voice XML browsers, WAP gateways, and gateways for con-necting PDAs.An important function that the device connectivity layer must provide is support of session cookies to allow the application server to associate a session with the device.The secure access component is the only system component allowed to invoke application functions. It checks all incoming requests and calls application functions according to security policies stored in a database or directory.A particular security state - part of the session state – is reached by authentication of the client using user-ID and password, public-key client authentication, or authentication with a smart card, for example. If the requirements for permissions defined in the security policy are met by the current security state of a request's session, then the secure access layer invokes the requested application function, e.g. a function that accesses a database and returns a bean. Otherwise, the secure access component can redirect the user to the appropriate authentication page.Typically, the secure access component will be implemented as an authentication proxy within a demilitarized zone as shown earlier.Finally, the output generated by the application logic is delivered back to the user in a form appropriate for the device him or her issuing. In the Figure, the information to be displayed is prepared by the application logic and passed to the content-delivery module encapsulated in beans.The content-delivery module then extracts the relevant part of the information from the bean and renders it into content that depends on the device type and desired reply content type, for example by calling appropriate JSPs.The content-delivery module delivers the content generated in the previous step via the device connectivity infrastructure that converts canonical responses (HTTP responses) to device-specific responses, using-appropriate gateways.For example, if a user accesses the system via a telephone, the voice gateway receives the HTTP response with Voice XML content and leads an appropriate 'conversation' with the user, finally resulting in a new request being sent to the server.