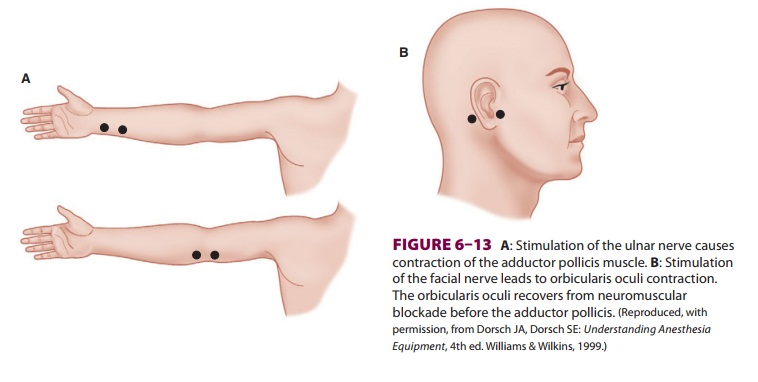 Because of the variation in patient sensitivity to neuromuscular blocking agents, the neuromus-cular function of all patients receiving intermedi-ate- or long-acting neuromuscular blocking agents should be monitored. In addition, peripheral nerve stimulation is helpful in assessing paralysis dur-ing rapid-sequence inductions or during continu-ous infusions of short-acting agents. Furthermore, peripheral nerve stimulators can help locate nerves to be blocked by regional anesthesia.

Th ere are no contraindications to neuromuscu-lar monitoring, although certain sites may be pre-cluded by the surgical procedure. Additionally, atrophied muscles in areas of hemiplegia or nerve damage may appear refractory to neuromuscular blockade secondary to the proliferation of receptors. Determining the degree of neuromuscular block-ade using such an extremity could lead to potential overdosing of competitive neuromuscular blocking agents.

A peripheral nerve stimulator delivers current (60-80 mA) to a pair of either ECG silver chloride pads or subcutaneous needles placed over a peripheral motor nerve. The evoked mechanical or electri-cal response of the innervated muscle is observed. Although electromyography provides a fast, accu-rate, and quantitative measure of neuromuscular transmission, visual or tactile observation of mus-cle contraction is usually relied upon in clinical practice. Ulnar nerve stimulation of the adductor pollicis muscle and facial nerve stimulation of the orbicularis oculi are most commonly monitored (Figure 6–13). Because it is the inhibition of the 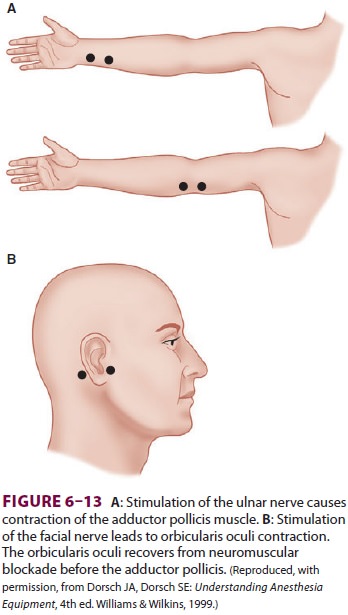 neuromuscular receptor that needs to be monitored, direct stimulation of muscle should be avoided by placing electrodes over the course of the nerve and not over the muscle itself. To deliver a supramaxi-mal stimulation to the underlying nerve, peripheral nerve stimulators must be capable of generating at least a 50-mA current across a 1000-Ω load. This current is uncomfortable for a conscious patient. Complications of nerve stimulation are limited to skin irritation and abrasion at the site of electrode attachment.

Because of concerns of residual neuromus-cular blockade, increased attention has been focused on providing quantitative measures of the degree of neuromuscular blockade perioperatively. Acceleromyography uses a piezoelectric transducer on the muscle to be stimulated. Movement of the muscle generates an electrical current that can be quantified and displayed. Indeed, acceleromyogra-phy can better predict residual paralysis, compared with routine tactile train-of-four monitoring used in most operating rooms, if calibrated from the begin-ning of the operative period to establish baselines prior to administration of neuromuscular blocking agents.

The degree of neuromuscular blockade is monitored by applying various patterns of electrical stimula-tion (Figure 6–14). All stimuli are 200 µs in dura-tion and of square-wave pattern and equal current intensity. A twitch is a single pulse that is delivered from every 1 to every 10 sec (1–0.1 Hz). Increasing block results in decreased evoked response to stimulation.

Train-of-four stimulation denotes four suc-cessive 200-µs stimuli in 2 sec (2 Hz). The twitches in a train-of-four pattern progressively fade as nondepolarizing muscle relaxant block increases. The ratio of the responses to the first and fourth twitches is a sensitive indicator of nondepolarizing muscle paralysis. Because it is difficult to estimate the train-of-four ratio, it is more convenient to visually observe the sequential disappearance of the twitches, as this also correlates with the extent of blockade. Disappearance of the fourth twitch rep-resents a 75% block, the third twitch an 80% block,  and the second twitch a 90% block. Clinical relax-ation usually requires 75% to 95% neuromuscular blockade.Tetany at 50 or 100 Hz is a sensitive test of neu-romuscular function. Sustained contraction for 5 sec indicates adequate—but not necessarily complete— reversal from neuromuscular blockade. Double-burst stimulation (DBS) represents two variations of tetany that are less painful to the patient. The DBS3,3 pattern of nerve stimulation consists of three short (200-µs) high-frequency bursts separated by 20 ms intervals (50 Hz) followed 750 ms later by another three bursts. DBS3,2 consists of three 200-µs impulses at 50 Hz followed 750 ms later by two such impulses. DBS is more sensitive than train-of-four stimulation for the clinical (ie, visual) evaluation of fade.Because muscle groups differ in their sensi-tivity to neuromuscular blocking agents, use of the peripheral nerve stimulator cannot replace direct observation of the muscles (eg, the dia-phragm) that need to be relaxed for a specific sur-gical procedure. Furthermore, recovery of adductor pollicis function does not exactly paral-lel recovery of muscles required to maintain an airway. The diaphragm, rectus abdominis, laryngeal adductors, and orbicularis oculi mus-cles recover from neuromuscular blockade sooner than do the adductor pollicis. Other indicators of adequate recovery include sustained (≥5 s) head lift, the ability to generate an inspira-tory pressure of at least –25 cm H2O, and a force-ful hand grip. Twitch tension is reduced by hypothermia of the monitored muscle group (6%/°C). Decisions regarding adequacy of rever-sal of neuromuscular blockade, as well as timing of extubation, should be made only by consider-ing both the patient’s clinical presentation and assessments determined by peripheral nervestimulation. Postoperative residual curari-zation (PORC) remains a problem in postanesthesia care, producing potentially injurious airway and respiratory function compromise. Reversal of neuromuscular blocking agents is warranted, as is the use of intermediate acting neuromuscular blocking agents instead of longer acting drugs. 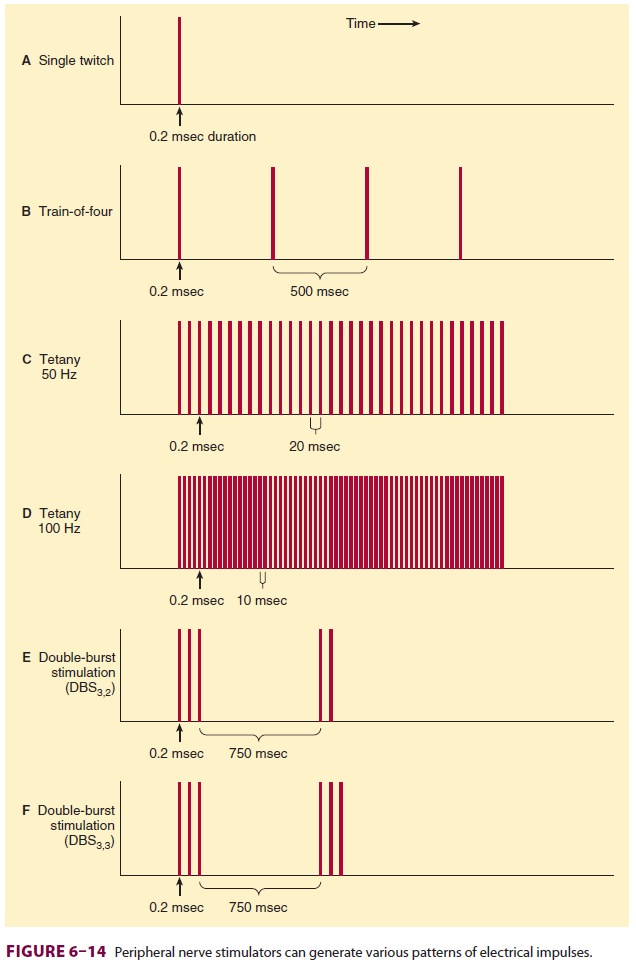